Mark Heckathorn
Off
21 and Over, comedy, movie review

This movie is your typical drunken comedy centered around a night of excessive alcohol. Written and directed by Jon Lucas and Scott Moore, writers of “The Hangover.” Substitute a 21-year-old for a bachelor party and a med school interview for a wedding and you’ve got the blueprint for “21 and Over.”

The plot centers around straight-A college student Jeff Chang (Justin Chon), who has always done what he was supposed to do. But when his two best friends, Wall Street-bound Casey (Skylar Astin) and college dropout Miller (Miles Teller), surprise him with a visit for his 21st birthday, Jeff Chang decides to do what he wants to do for a change, even though his important medical school interview is at 8 a.m. the next day. What was supposed to be one beer becomes a night of humiliation, over indulgence and utter debauchery. 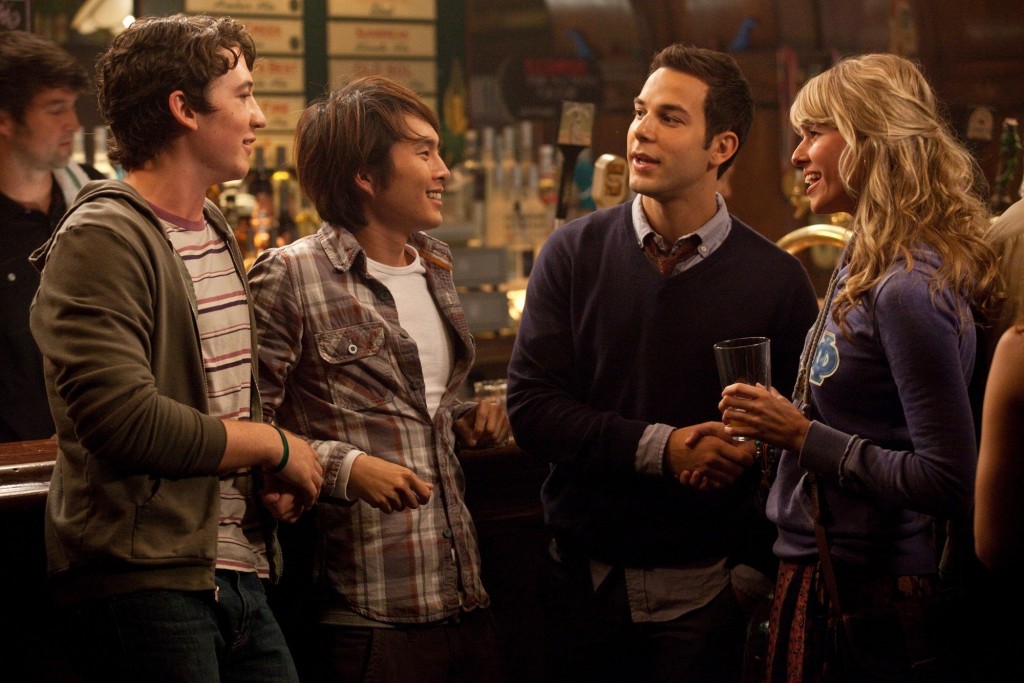 Miles Teller, Justin Chon, Skylar Astin and Sarah Wright meet in a bar at the start of the three guy’s night of drinking. John Johnson/Twenty One and Over Productions, Inc.

A Younger Version of “The Hangover”

There are plenty of similarities to “The Hangover” including wild animals on the loose, characters defying the authorities and pretty much everything else that goes with a night of wild partying, but on a younger level such as intense beer pong matches, driving stolen golf carts, semi-nude streaking and plenty of booze and boobs.

After drinking at nearly every bar in town, Jeff Chang is passed out and his friends don’t remember his address so they go on a quest to get him home before his stereotypical, overbearing, Asian dad arrives at 7 a.m. to take Jeff Chang to his interview. The two set off dragging Jeff Chang looking for Nicole (Sarah Wright), their passed-out pal’s acquaintance they met at the first bar.

The two friends break into a sorority house in search of Nicole, leaving Jeff Chang tied to a toilet in the women’s bathroom only to find it was the wrong sorority. But in the meantime, they pretend to be the sorority’s pledge mistress to blindfolded pledges in their bra and panties, spanking them and ordering them make out with each other. After they are discovered, they escape the house by throwing Jeff Chang off a balcony onto the cover of a winterized swimming pool, which acts as a trampoline and launches him into the rose bushes. Later, the two are captured by the sorority sisters and made to take the same treatment they dished out and then get branded with the sorority’s Greek letters. Viewers learn that Jeff Chang is not the straight-A student he appears, but rather, on the verge of failing out of college altogether, a fact punctuated with the news that Chang is not tutoring in science, but being tutored by Nicole.

On their quest, they also go to a pep rally, which ends with a runaway buffalo. And they attend a dorm party at which they must complete drinking contests such as beer pong to reach the eighth floor and Jeff Chang’s old resident assistant. While the two drink their way to the top, they leave Jeff Chang with the stoners who dress him in a bra, glue a teddy bear to his crotch, and write “Respect Me” on his stomach and “Douche Ba” on his forehead. While his friends are upstairs, Jeff Chang wakes up, wanders outside and drinks some more. When his friends come to his aid, he runs off and gets arrested, landing in the campus health center under psychiatric watch.

While this will not be on the list of Oscar nominees, the physical humor, gratuitous public nudity, a wild car chase and an extended slow-motion sequence of Jeff Chang projectile vomiting is good for some laughs and an hour and a half of mindlessness. Rated R. Opens March 1, 2013.