Movies Under the Stars Are Back This Year

Summer is here. The DMV is coming out of the pandemic. Restrictions have been lifted. And life is beginning to return to normal. Cool off and relax with free movie screenings under the stars. Many locations that hosted outdoor movies in the past, like the Georgetown BID, are skipping this year. Remember to take your picnics, blankets and bug spray. Check back because we will add more as the dates and movies are announced. 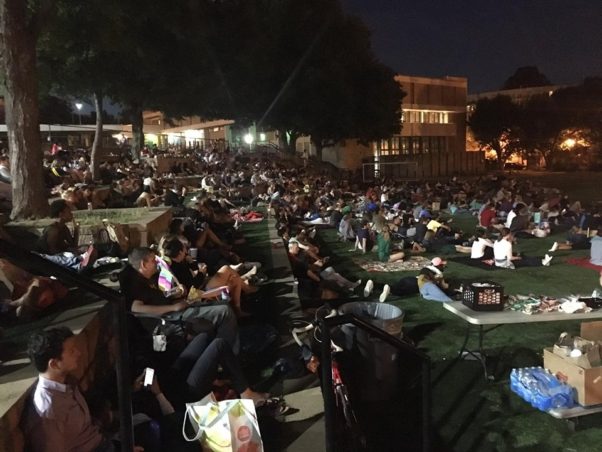 The series kicks off July 12 with Punk the Capital with a panel discussion before the film. The screenings continue with Wonder Woman 1984 on July 19, In the Line of Fire on July 26, Night at the Museum – Battle of the Smithsonian on Aug. 2 and All the President’s Men on Aug. 9. Aug. 16 is a rain date. 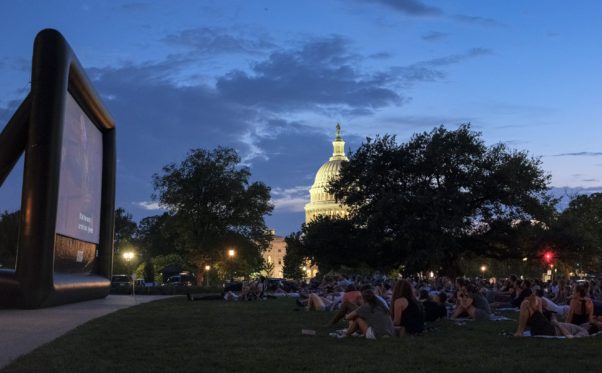 The Library of Congress’ Summer Movies on the Lawn series features a movie from the National Film Registry every Thursday evening from July 12-Aug. 16. (Photo: Shawn Miller)

The Library of Congress sponsors free Summer Movies on the Lawn every Thursday from July 8 through Aug. 5 beginning at sunset (gates open a 6:30 p.m.) on the north lawn of the Thomas Jefferson Building, 10 First St. SE between the Jefferson Building and the Supreme Court. Moviegoers are welcome to take picnics.

This year’s screenings, from the National Film registry, include The Princess Bride on July 8, Shrek on July 15, Toy Story on July 22, The Sound of Music with an audience singalong on July 29 and Jurassic Park on Aug. 5.

This year, the Columbia Pike Revitalization Organization sponsors drive-in movie nights beginning at sunset (between 8-8:30 p.m.) on Saturdays at the Arlington Career Center, 816 S. Walter Reed Drive, Arlington. Movies are rated either G or PG-13 and most are in English with Spanish subtitles. Admission is free thanks to Amazon and the Washington Forrest Foundation but preregistration is required and opens two days before the screening. 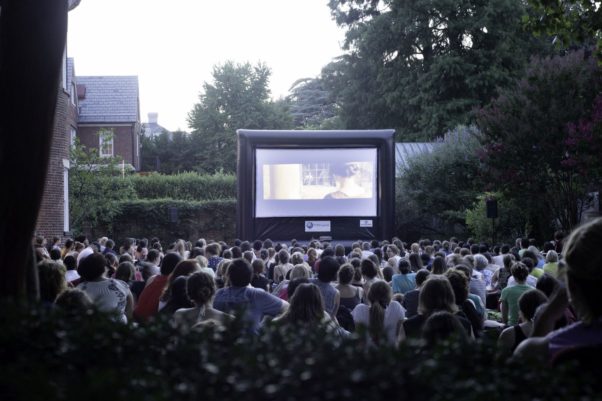 The Dumbarton House, 2715 Q St. NW, sponsors the 10th annual Jane Austen Film Festival from 7-10 p.m. Wednesdays in July with films starting at sunset. Take a blanket or low chairs and enjoy the movie in the house’s historic garden. Refreshments and concessions will be for sale. Admission is $10 per film. Seating is limited to 150 and moviegoers must wear masks when out of their seats.

This year’s lineup includes Emma on July 7, Sense and Sensibility on July 14, Love and Friendship on July 21 and Pride & Prejudice on July 28. 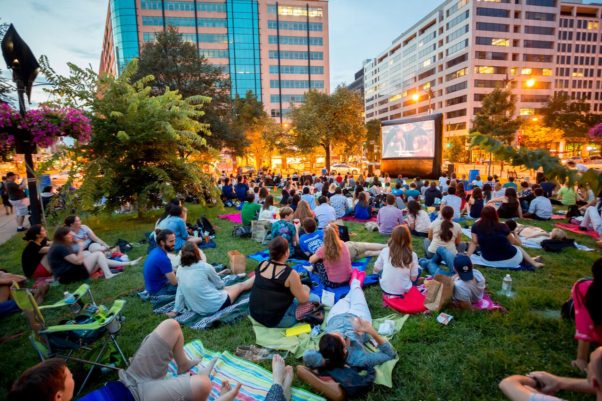 This year’s movies have not been announced yet.

Take the family and a blanket to Moonlight Movies at the Mansion on the front lawn of historic Kentlands Mansion. Screenings take place from 7:30-11 p.m., with the movies starting just after sunset. Admission is $5 per person and light concession will be for sale.

Movies include Independence Day on July 1, The Sandlot on July 15 and Rio on July 29. 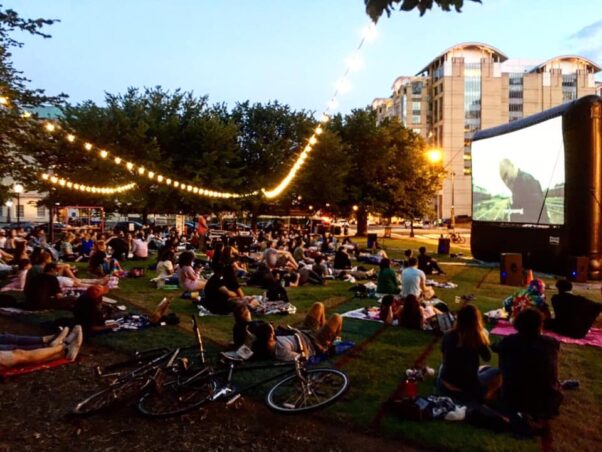 The Downtown D.C. BID’s Can I Kick It? outdoor film festival moves to the National Building Museum this year. (Photo: Shaolin Jazz/Facebook)

Every Tuesday at about 8:30 p.m. in June and July, the Downtown D.C. Business Improvement District turns the west lawn of the National Building Museum, 401 F St. NW, into an outdoor movie theater with Can I Kick It? featuring a theme of “The Future” scored with an original music soundtrack of hip hop, soul and more by guest DJs. Take a blanket (no chairs) and arrive at 7:30 p.m. to listen to pre-movie music by DJ 2-Tone Jones. Local restaurants are offering pre-ordered meals. Face masks are required.

The schedule includes Star Trek on May 25, Ready Player One on June 1, Aliens on June 8, Tenet on June 15, Starship Troopers on June 22 and Solo: A Star Wars Story on June 29. The series wraps up with Minority Report on July 6, Tron: Legacy on July 13, I Robot on July 20 and Mad Max: Fury Road on July 27. 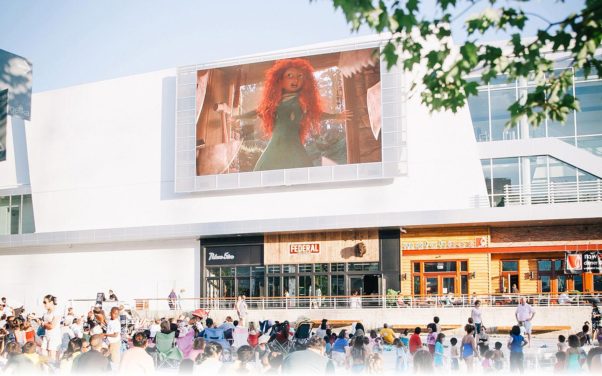 The Mosaic District hosts its outdoor movie series, Films in the Park on the big screen in Strawberry Park, 2805 District Ave., Fairfax. Movies begin at 7 p.m. every Thursday this summer through Sept. 2.

This year’s schedule includes Mama Mia! on June 17, The Birdcage on June 24 and Footloose on July 1. The rest of the schedule has not been announced yet. 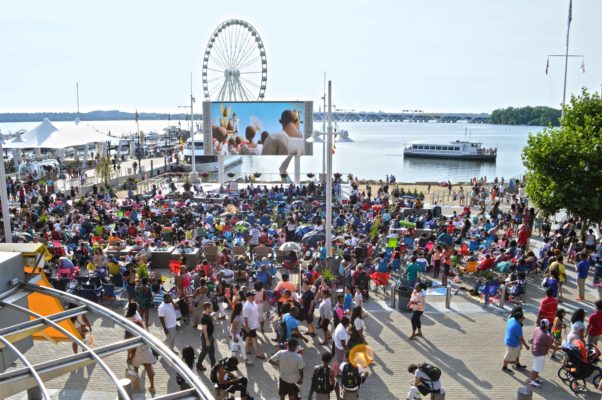 National Harbor shows Movies on the Potomac with family-friendly films at 6 p.m. on Sundays and Date Night Movies at 7 p.m. on Thursdays through September on the Plaza’s big screen. Pack your blankets, grab food to go from one of the many restaurants and watch a free movie with a view of the Potomac. Parking is $5 for up to 1.5 hours, $15 for 1.5-3 hours and $20 for more than 3 hours. The Fleet Street garage is the nearest to the Plaza.

The movie schedule is due to be announced June 29.

Union Market will show an outdoor movie the first Friday of the month through November. (Photo: Union Market)

The Drive-In at Union Market returns with its ninth season the first Friday of the month from May through October. The market, 1309 Fifth St. NE, will show the flicks on the front of the building with captions. The films begin at dark, between 7:15-9 p.m. Admission is free for bikers and walkers, but parking is $20 per carload.

The line-up includes Inside Out on May 7, The Adventures of Priscilla, Queen of the Desert on June 4, Wonder Woman 1984 on July 2, Sister Act on Aug. 6, Crazy Rich Asians on Sept. 3 and Cruella on Oct. 1. 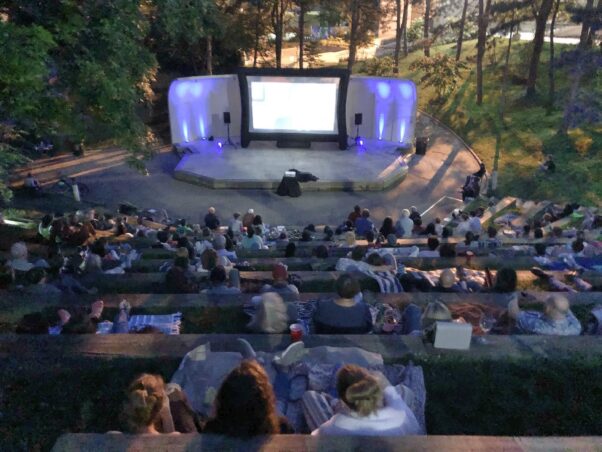 The Van Ness Main Street and the University of the District of Columbia are joining forces this summer to host Movie Night in the Park at the UDC amphitheater off Yuma Street behind the tennis courts on the second and third Wednesdays of June, July and August. The theme for this year’s family-friendly films is perseverance. Take a picnic, or buy dinner, drinks or snacks from local eateries. You can also take your own blankets or cushions or sit on the amphitheater’s wooden benches. Gates open at 8 p.m. with the showtime at 9 p.m. Admission is free, but registration is required.