I Want Them to Know How Much It Meant

Area Woman Only Passenger on Flight to Say Goodbye to Mom

A McLean woman flying home to see her dying mother one last time was the only passenger on her recent flight. 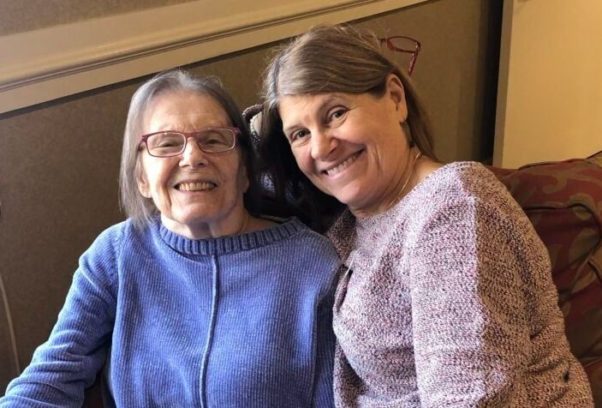 Sheryl Pardo’s mother, Sandra Wilkins, entered hospice care in the Boston area in late March after battling dementia. On the morning of March 27, Pardo drove to Ronald Reagan Washington National Airport unsure if she would be able to board her flight due the coronavirus pandemic.

Pardo was nervous about flying during a pandemic, but her mother was critically ill, and she wanted to see her one last time.

When she arrived at the airport about 6 a.m., she only saw six other passengers. The only store open was a Dunkin’ Donuts. When it was time to board her American Eagle flight, the associate director of communications at The Urban Institute was the only passenger.

Upon boarding, the flight attendants upgraded her to first class. After Pardo took her seat, Jessica, one of the two flight attendants, addressed the plane like she usually would before a flight. But this time was a little different.

“My name is Jessica. Dion and I will be your flight attendants today,” Jessica began her announcement. “And we have Sheryl as our passenger today, living it up in first class mama! Everybody shout out to Sheryl, the only passenger on the plane!”

Pardo said she felt an instant connection with the flight attendants. She spent the flight telling them about her mom and the loving, get-things-done person she was.

Her mother worked as a school nurse. Later in life, she went back to school to get a master’s in human ecology. She spent years helping refugee families in the U.S., and she volunteered in Haiti after the 2010 earthquake.

The past two months were hard, with frequent trips to the emergency room, a fall and infections. The rehabilitation center where she stayed was closed to visitors because of coronavirus, so Pardo and her brother couldn’t visit for a while.

“The flight attendants were so great … and it was kind of fun,” Pardo said. “I was obviously anxious about seeing my mom for the last time, so it was kind of awesome to just laugh.”

She was touched by the light-hearted mood and how Jessica asked about her mom without making it sad.

“This is not a tragic situation because my mom had dementia and had really been declining,” she said. “She was living in a stage of life she would not have wanted prolonged, and she was in hospice.”

“There’s this kind of fear (right now) that we’re a little bit more vulnerable and open,” Pardo, who noted that they were social distancing during the flight, said. “I want them to know how much it meant to me,” the 59-year-old said. “It was super positive, which I didn’t expect from that trip.”

“I think in moments like this the pain of losing your mom is exacerbated by being in this frightening time,” Pardo told CNN. “Other people’s kindness is what’s going to get us to through this.”

After arriving in Boston, Pardo spent the day with her mom and her brother, Greg, before flying back home that same night. Pardo was again the only passenger on her flight home, but it wasn’t the same as in the morning. 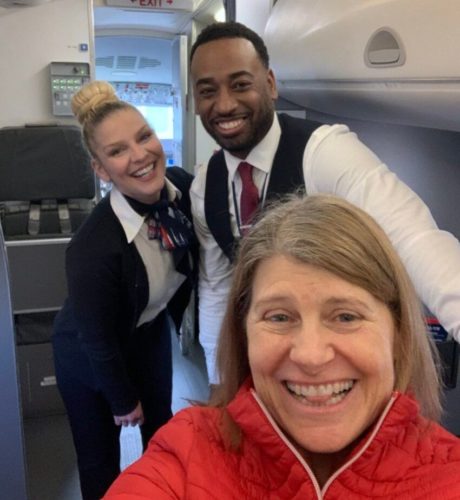 Pardo, Jessica and Dion pose for a selfie aboard the plane. (Photo: Sherly Pardo)

“They were very funny,” Pardo said of the flight attendants on her evening flight. “But I didn’t really chat with them. I just think I clicked with Jessica and (that flight) was the first thing in the morning, and I’m a morning person.

“And obviously flying back was harder, because that was the last time I was going to see my mom.”

Wilkins passed away the next morning, March 28. She was 83 years old.

Pardo said her mom didn’t want to be in hospice for long and was happy she got to pass on her own terms.

Pardo and her family plan to host a memorial, perhaps in the summer when things may be safe. They plan to celebrate her in Ithaca, New York, where their mother raised them.

“When we all get released from captivity, we’ll do a celebration together of Sandra’s life,” Pardo said. “It feels like reality is suspended right now. I feel like it’s going to hit me differently when life returns to normal.”

Pardo hopes her story, which has gone virual, gives attention to the flight attendants that she believes are doing great work.

“It’s been fun to have people care about this story and to get to elevate the flight attendants who have a really hard job and who I’m sure scared going to work right now,” Pardo said. “I want them to know how much it meant to me.”

“[Jessica] and Dion were both very new flight attendants,” Pardo said. “So, I’m assuming that means they’re, you know, the people way down on the totem pole, and are the ones who had to go work during this situation. I hope they get a lot of credit for doing a great job and giving them a public face.”

“I think everyone is really wanting a nice story right now.”