Will Serve Spanish/Japanese Menu and Sake 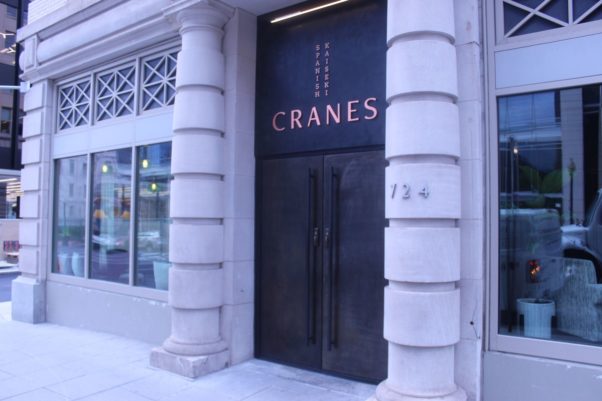 Cranes, a Spanish tapas and Japanese omakase restaurant, opens in Penn Quarter beside the MLK Library on Feb. 8.
(Photo: Mark Heckathorn/DC on Heels)

It is partner/chef Pepe Moncayo’s first U.S. restaurant. The name alludes to Spanish birds and Japanese fables and symbols. References to the birds can be found in the ceramic crane chopstick holders at each seat and footprints on the kitchen staff’s aprons to chandeliers hanging over the bar and a statue on the host stand.

“Spanish kaiseki is a natural combination,” Moncayo said. “Japanese cooking is well-represented in the culinary scene in Singapore, and I fell in love with it the moment I moved there. The more I learned about Japanese cuisine, the more similarities I saw with the cooking I grew up with in Catalonia. When you look at the two cuisines, there are so many shared elements, from the cooking techniques to the way we combine ingredients and flavors. I embraced a Japanese sense of simplicity, cleanliness and focus on ingredients, but with a Mediterranean approach, and, of course, the other way around as well. Having lived in Washington for more than a year now, I have begun to see how vital boundary-pushing is to this city’s modern culinary identity.”

The 12,000-square foot restaurant was completely gutted and remodeled. D.C.-based //3877 designed the interior with understated but warm elements, concrete floors, black tables, chairs with black leather seats and beige cloth backs, dark wood panels, polished metals, dramatic lighting and exposed ceilings. It seats 50 in the bar and sake lounge, 175 in the two-level main dining room, 25 in a private dining room and six in another private space that was formerly storage. At the back of the restaurant, old sake glasses are hung on the wall, resembling broken eggshells.

The 41-year-old Moncayo, who hails from Barcelona by way of Singapore, began cooking at age 13 when his mother died. He headed to culinary school in Barcelona but dropped out after six months to work in restaurants. 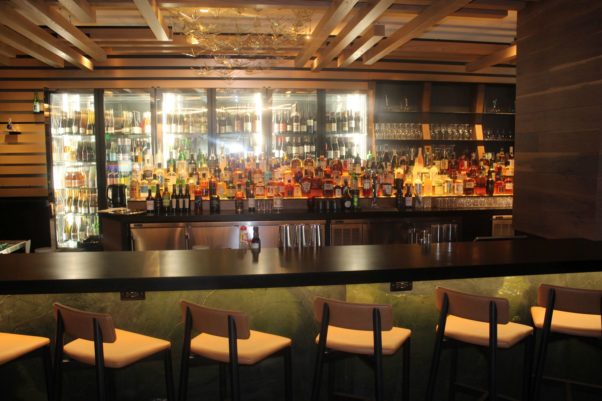 The 50-seat bar and lounge serves a wide selection of sake and traditional cocktails. (Photo: Mark Heckathorn/DC on Heels)

Via Veneto in Barcelona was the first Michelin-starred restaurant he worked at. He also worked for Javier and Sergio Torres at the two-Michelin-starred Dos Cielos and Michelin-starred Catalan chef Santi Santamaria at Can Fabes and EVO. Santamaria eventually sent Moncayo to help open his eponymous restaurant Santi inside the Marina Bay Sands casino in Singapore. That is when he says he was exposed to the Asian experience.

“Japanese cuisine, wherever you go in the world, the standards are very consistent,” Moncayo told DC on Heels.

Eventually the chef opened his own BAM! restaurant in Singapore, which has a similar menu to Cranes. “Cranes is not an evolution (of Spanish and Japanese cuisine). It is my personal cuisine, the filter I apply to cooking,” Moncayo said.

He said now in D.C. is the “perfect city at the perfect moment” for him to open the restaurant as the city “changes from a steak house city to a cultural hub.”

About 75% of the dishes on Crane’s menu are what Moncayo called his “greatest hits” and are also served at BAM! The flavor combinations are unique and test the senses to show how the Japanese and Spanish ingredients pair. The tapas range from $8-$28 while the omakase menu is includes six courses of the chef’s choosing for $88 with a $45 beverage pairing available. 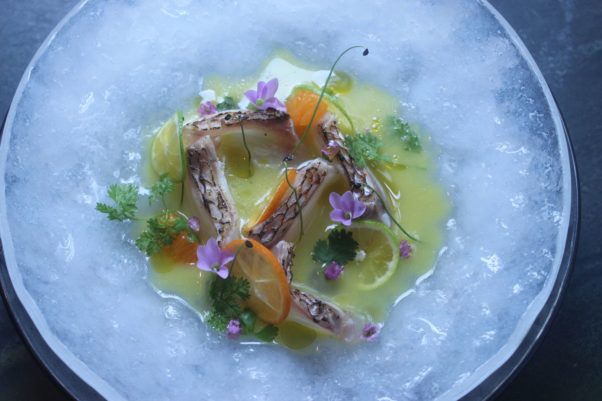 Madai aburi with chilled citrus dashi, shirasu and spring onion should be eaten with a spoon. (Photo: Mark Heckathorn/DC on Heels)

Pastry chef Jonni Scott, formerly at Junction Bakery & Bistro in Alexandria, is in charge of desserts, which range from $10-$13. Japanese and Spanish desserts both rely heavily on citrus and egg custards. One of her creations is a winter citrus tart ($13) made with yuzu curd, bitter orange and mandarin sorbet. Also on the dessert menu is a ube-coconut ice cream sandwich ($12) made with purple yam, chocolate and coconut. 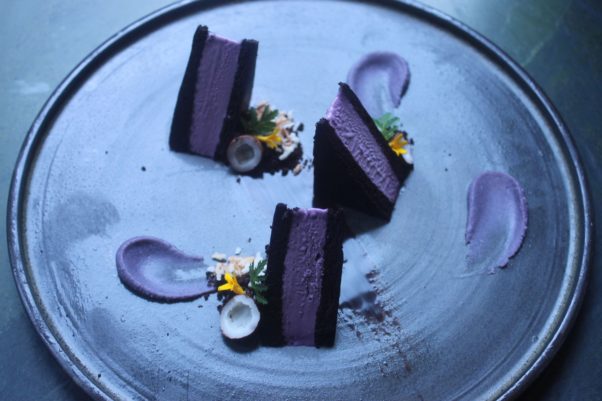 Bar manager Monica Lee, formerly of the Daikaya Group, is also the sake specialist. Separate from the dining room, the sake lounge features a list of Japanese rice wine, such as Kotsuzumi Rojo Hana Ari “Aoi” Junmai Daiginjo and Yamada “Everlasting Roots” Tokubetsu Junmai, as well as classic cocktails. Sake is priced from $9-$32, wine-by-the-glass from $12-$43, cocktails from $12-$16 and beer from $7-$12.