Joker Laughs to the Top of the Charts

The joke wasn’t on Warner Bros. Pictures last weekend (Oct. 4-6), as their gritty R-rated Joker set a new record for biggest domestic October opening weekend with $96.20 million, breaking the previous record of $80.26 million set by last October’s Venom, which was also the prior record holder when adjusted for inflation. Among R-rated superhero or superhero-related movies, it also beat the $88.41 million of Logan and $55.21 million of Watchmen. 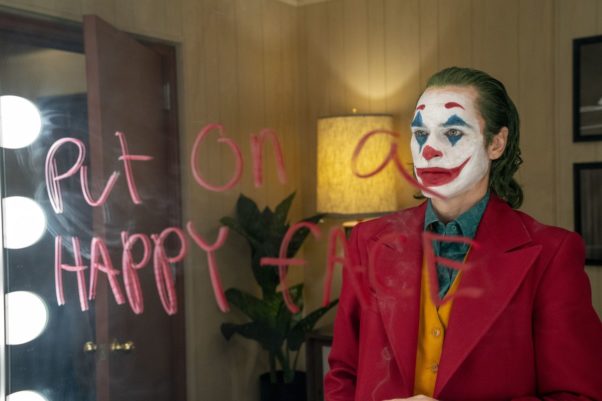 Riding a tidal wave of hype and not a little controversy, Joker was also the highest debut for director Todd Phillips and star Joaquin Phoenix. It reached that impressive number in part for being the only wide new release of the weekend, in addition to lack of competition for the young male demo that turned out for the film in droves, as 64% of the opening weekend audience were men and 66% were under 35. Notably, its release in 4,374 locations is also the largest ever for the month of October.

Given its status as the first big-screen movie to feature the iconic Batman villain as its main “protagonist” and the overwhelming popularity of the superhero genre in general, it is safe to say Joker was going to enjoy a solid debut no matter what. But it is hard to deny the power of controversy in bringing the DC Extended Universe title to record heights. The film has been divisive to say the least – attested to by mixed critical reviews – and it has been the subject of countless think pieces and robust social media activity over the last several weeks, with those deeming it a potentially dangerous work of provocation countered by a slew of vocal and passionate defenders, particularly the hardcore fan community. Undoubtedly, Joker is one of the most talked-about movies of the year and perhaps the decade, with a deafening level of buzz that, along with frequent reference to Phillips’ gritty, Scorsese-influenced take on the material, likely helped pique the interest of moviegoers who might not otherwise have been inclined to see it.

As comparables go, the previous October record-holder Venom also centered a comic book villain as its lead character, both strongly appealed to an audience of young males, and both had divergent audience and critical receptions. But unlike the PG-13-rated Venom, Joker’s R-rating – still a rarity for a comic book movie despite the recent success of films like Deadpool and Deadpool 2 – makes its breakout success all the more impressive. Whether it can keep up the momentum in subsequent weeks remains to be seen, but if it performs in line with Venom, it could be looking at a final tally in the neighborhood of $250 million.

Falling 42.2% to second place after topping the box office the previous weekend was Universal Pictures’ Abominable with $11.92 million in its second weekend. The animated adventure from Dreamworks Animation and Pearl Studio now stands at $37.75 million domestically after 10 days of release, roughly 10% behind last year’s similar Smallfoot at the same point.

Focus Features’ Downton Abbey finished in third place with $7.99 million, down 44.3% from the previous weekend’s gross. The continuation of the hit TV series now has earned $73.62 million in North America through the end of its third weekend, making it the studio’s third-highest release of all time not adjusting for inflation after 2005’s Brokeback Mountain with $83 million and 2009’s Coraline with $75.2 million. Look for it to surpass both by the time it leaves theaters.

In fourth place was STX Entertainment’s Hustlers with $6.39 million, down 43.9%, bringing the domestic total for the crime drama to an impressive $91.42 million through the end of its fourth weekend. Just behind it in fifth place was Warner Bros.’ It: Chapter Twowith $5.32 million, down 48.1% in its fifth weekend for a domestic total of $202.17 million to date. The Stephen King sequel is now only the third horror film in history to surpass the $200 million mark after the first It and The Exorcist, the latter of which reached that amount only after its 2000 re-release (although adjusted for inflation its box office total easily surpasses both It installments).

In seventh place, the Walt Disney Studios’ release of 20th Century Fox’s Ad Astra fell a somewhat steep 58.1% to $4.19 million in its third weekend. The Brad Pitt movie, which reportedly cost upwards of $100 million, has earned just $43.30 million to date in North America and will have to count on Pitt’s bankability overseas to make up the shortfall.

Also in its third weekend, Lionsgate Films’ Rambo: Last Blood fell 58.1% to eighth place with $3.60 million, bringing the total for the Sylvester Stallone sequel to $39.87 million. Expect it to surpass its immediate predecessor, 2008’s Rambo, by the end of its run.

In ninth place was the Bollywood action-thriller War, which set an opening-day record in its native India and debuted to a decent $1.61 million from just 303 locations in North America. The film comes from Indian distributor Yash Raj Films, which also distributed 2017’s Tiger Zinda Hai, which grossed $5.5 million domestically and $81.7 million overseas.