Godzilla Sequel Is King of the Box Office

The summer box office continued to heat up last weekend (May 31-June 2) with the arrival of three major new releases, though only one stole the crown from the previous weekend’s champ Aladdin. That movie, predictably, was Godzilla: King of the Monsters, which took in $47.78 million in its debut. Meanwhile, the weekend’s other two newcomers — Rocketman and Ma — also managed healthy debuts in successful feats of counter-programming. 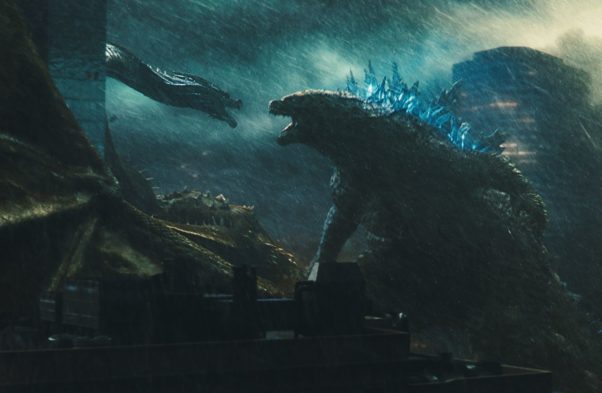 Opening ultra-wide in 4,108 locations, Godzilla: King of the Monsters debuted on the more conservative end of expectations, hobbled by lukewarm reviews and the somewhat tepid audience reaction to its predecessor Godzilla, which opened to a gargantuan $93.1 million in May 2014 before declining rapidly.

King of the Monsters is actually the third film in Warner Bros. Pictures/Legendary’s ongoing “MonsterVerse” franchise, following on the heels of 2017’s Kong: Skull Island, a reboot of the silver screen’s other giant monster King Kong. That film debuted with a better $61 million, giving King of the Monsters the lowest debut in the franchise to date despite opening on the largest number of screens.

That said, King of the Monsters seems to be playing well with its target demo of older males, as the film’s opening-weekend audience consisted of 67 percent men and 59 percent over the age of 35. Despite not being a favorite of critics, the sequel’s opening weekend audience score of 87 percent is currently better than either Kong: Skull Island at 69 percent or Godzilla at 66 percent. Word-of-mouth will clearly be a factor in how King of the Monsters holds up moving forward, although competition looks to be reasonably fierce over the next couple of weekends, with the release of the X-Men installment Dark Phoenix this coming weekend and the franchise reboot Men in Black: International the following one.

Falling to second place in its second weekend was Walt Disney Studios’ Aladdin, which fell 53.2 percent to $42.84 million after debuting to an impressive $91.50 million the previous weekend. Among Disney live-action remakes, that is the second-biggest second weekend drop after this year’s Dumbo with a 60 percent drop, although some of that can be attributed to the heavy loss of screens last weekend. However, Aladdin had the family audience mostly to itself, and it now stands at $184.54 million domestically as it faces the release of this coming weekend’s animated sequel The Secret Life of Pets 2.

Rocking into third place was Paramount Pictures’ Elton John musical biopic Rocketman, which opened with $25.73 million from 3,610 locations including $580,000 from a Fandango preview event held on May 18. While that is far short of last year’s mega-hit Freddie Mercury biopic Bohemian Rhapsody, which had a $51 million debut, it is nonetheless a healthy debut, particularly considering that it came with a more-restrictive R rating versus Bohemian Rhapsody’s PG-13 rating. Unlike Bohemian Rhapsody, the musical fantasy starring Taron Egerton as Elton John benefitted from largely positive reviews. It also held strong appeal with older moviegoers and women specifically.

That appeal with the over-35 crowd could be predictive of how Rocketman holds up in subsequent weekends. This one certainly has the potential to demonstrate stronger-than-average staying power, as older audiences have less of a tendency to rush out on opening weekend, meaning a significant segment of moviegoers who intend to see the film simply haven’t made it out to the theater yet. It could also benefit from strong word-of-mouth based.

Last weekend’s final new wide release, Universal Pictures’ horror Ma starring Octavia Spencer opened in fourth place with $18.10 million, which is as a healthy opening for the reported $5 million Blumhouse title. Among recent releases from the genre-movie powerhouse, its debut was roughly in line with last year’s Truth or Dare, which opened with $18.6 million on its way to a $41.1 million total.

Ma received a mixed response from critics, while audiences seem to be roughly of the same mind. Luckily, the film’s aggressive marketing campaign went a long way in selling this as a must-see event for horror fans last weekend, particularly with a dearth of similar fare in theaters currently.

Falling 54.9 percent to fifth place was John Wick: Chapter 3 – Parabellum with $11.09 million in its third weekend. The Lionsgate Film action flick has earned $125.74 million in North America, a marked improvement over the two previous films in a series that has expanded its audience in impressive fashion with each new entry.

Avengers: Endgame finished in sixth place with $8.04 million, a 53.2 percent drop, bringing the domestic total for the Disney Studios/Marvel Studio’s blockbuster to $815.73 million after six weeks. The film is now and will remain the second highest-grossing domestic release of all time after Star Wars: The Force Awakens.

In seventh place, Pokemon Detective Pikachu dropped 48.2 percent to $6.95 billion, giving the Warner Bros. release $130.89 million in North America after four weeks. That is a decent-if-not-spectacular total, although it has brought in twice the amount of business overseas.

Following a disappointing three-day opening of $6.93 million the previous weekend, the United Artists Releasing teen comedy Booksmart slid 52.4 percent to $3.30 million and eighth place, bringing its domestic total to $14.34 million after 10 days. Despite fantastic reviews and a much-buzzed-about opening at SXSW, the Olivia Wilde-directed romp simply hasn’t caught on with moviegoers; on the bright side, it seems destined to fare considerably better in its post-theatrical life.

Tumbling a steep 68.8 percent to ninth place was Sony Pictures’ superhero/horror flick Brightburn, which brought in $2.46 million in its second weekend and now has $14.34 million after 10 days domestically. Rounding out the Top 10, the Anne Hathaway-Rebel Wilson comedy The Hustle fell 63.1 percent to $1.32 million, giving the United Artists release $33.22 million in North America after four weeks.