Despite several new releases aimed at all different demographics the moviegoing audience last weekend (Apr. 12-14), Warner Bros. Pictures adaptation of DC Comics’ Shazam! held on to the top spot for a second weekend in a row with $24.45 million, bringing the North American total for the superhero comedy to nearly $100 million. Elsewhere, Little shot ahead of Hellboy to claim the runner-up spot, while Laika’s Missing Link stumbled and the young adult adaptation After overperformed. 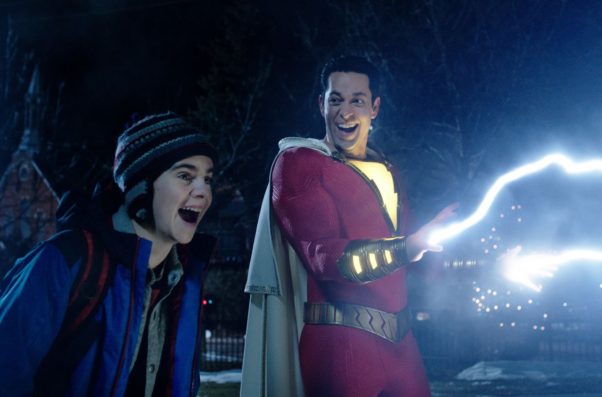 Continuing to ride high following its solid $53.51 million debut the previous weekend, Shazam! fell 54.3 percent in its second weekend for a North American total of $94.23 million. That is a better second-weekend performance than the majority of DC Extended Universe releases, which tend to drop more than 60 percent in their second weekends, Aquaman and Wonder Woman excluded. Look for it to cross $100 million by this coming weekend.

Making a surprise showing in second place was Little, the Regina Hall-Issa Rae-Marsai Martin fantasy comedy that has become just the latest effective counter-programming effort from phenomenally-successful producer Will Packer. The Universal Pictures release took in $15.41 million in its debut, lifting it higher than industry forecasts heading into the weekend and allowing it to usurp the expected second place finisher Hellboy. Reviews were only middling for the wish-fulfillment comedy, but audiences seem to have liked it much better.

Little also benefitted from being the sole outright comedy in wide release at the moment, with winter releases like Isn’t It Romantic, What Men Want and A Madea Family Funeral all nearing the end of their theatrical runs. Notably, the audience for Little was 65 percent female and 43 percent African-American.

Coming in third with a disappointing $12.05 million was Hellboy, the reboot of the comic-book franchise that was kicked off by Guillermo del Toro’s two previous installments. There were a number of notable factors working against the Lionsgate Films release last weekend. For starters, it received some of the worst critical reviews of any wide-release title this year, which was a far cry from the generally well-received Del Toro films. Secondly, the absence of Del Toro in the director’s chair — The Descent director Neil Marshall stepped in this time around — may have turned off many fans of the previous Hellboy installments, which were generally well-liked.

Another likely factor in Hellboy’s less-than-desirable debut was the fact that it arrived sandwiched between two other high-profile superhero releases: namely, Shazam! and Avengers: Endgame, which has already been breaking records in advance of its Apr. 26 release. Coupled with its more restrictive R-rating and poor reviews, the already-saturated market for superhero fare may well have deterred non-Hellboy-diehards from turning out last weekend.

Dropping places to fourth following a good $24.50 million debut the previous weekend was Paramount Picture’s Pet Sematary, which fell 60.2 percent to $9.75 million in its sophomore weekend. The new adaptation of Stephen King’s classic novel/remake of the 1989 film now has $40.87 million domestically after 10 days. While far from the kind of blockbuster numbers boasted by 2017’s It, that is nonetheless a healthy total for the horror film.

Fifth place went to Walt Disney Studios’ Dumbo, which earned $9.40 million in its third weekend. Despite its well-known title character and blockbuster budget reported at $170 million, the film has been performing less like fellow live-action remakes Beauty & the Beast and Cinderella and more like last year’s Christopher Robin, which finished its domestic run just shy of $100 million off a much more modest $75 million reported budget. Although its international grosses have been relatively more robust, Dumbo has nonetheless proved to be something of a disappointment for a studio that has banked part of its world-domination strategy on these live-action remakes of classic animated titles.

Sixth place went to Disney/Marvel Studios’ Captain Marvel, which continued to soar with $8.61 million in its sixth weekend. With $386.53 million in North America so far, the superhero release will soon topple the $389.8 million total of Guardians of the Galaxy Vol. 2 to become the seventh highest-grossing title in the Marvel Cinematic Universe domestically.

Holdover Usfell 50.7 percent to $6.81 million in seventh place, bringing the domestic total for the Jordan Peele horror film to $163.36 million after four weeks. The Universal title has been fading considerably faster than Peele’s previous release Get Out, which brought in $13.4 million on its fourth weekend despite opening considerably lower at $33.3 million.

Making a better-than-expected showing in eighth was the debut of Aviron’s YA adaptation After, which managed a $6.2 million debut. The movie seems to have appealed to a healthy segment of fans who originally gobbled up author Anna Todd’s book series, which began as One Direction fan fiction online before being repackaged by Simon & Schuster without the One Direction element. Reviews for the film weren’t good, although it fared better with audiences.

The weekend’s final new wide release Missing Link faltered in ninth place with $5.94 million despite debuting on over 3,400 screens, which is the widest debut for any Laika release to date, and impressive reviews. While it is possible the United Artists release will hold up well in subsequent weekends — Laika movies tend to have lengthy runs — this is by far the lowest wide opening of any of the animation studio’s movies to date, with the previous low being 2016’s Kubo and the Two Strings with $12.6 million. As is usually the case with stop-motion animated films, the opening represented but a fraction of what the average computer-animated movie tends to bring in on opening weekend, again demonstrating the more limited appeal of stop motion in the 21st century.

In 10th place, last weekend’s newcomer STX Entertainment’s The Best of Enemies took in $2.01 million, bringing the domestic total for the Taraji P. Henson drama to $8.12 million after 10 days.