Debuting on a holiday weekend (Jan. 18-21) with no other major new releases in theaters, Glass had a pretty good three-day opening of $40.33 million and a four-day gross of $46.50 million, making it the third-highest opener in MLK weekend history, behind only American Sniper with $89.2 million/$107.2 million and Ride Along with $41.5 million/$48.6 million. Meanwhile, The Upside and A Dog’s Way Home showed their staying power in their second weekends, anime import Dragon Ball Super: Broly made a surprising showing, and Aquaman crossed the $300 million threshold in its fifth weekend.

While some early forecasts had Glass debuting with up to $80 million, less-than-stellar reviews for the third film in M. Night Shyamalan’s superhero trilogy after Unbreakable and Split brought the Universal Pictures’ release back down to Earth. When looked at in context of the sky-high predictions, last weekend’s opening could be viewed as a disappointment. Nonetheless, early expectations were so high that what the film ultimately landed at is still a pretty impressive number, particularly considering its relatively-frugal $20 million budget. Indeed, the continuing cult appeal of Unbreakable, whose reputation has arguably grown among fans since its 2000 release, and the surprise success of the well-liked Split with its $40 million debut two years ago gave Glass a huge amount of momentum leading up to its release, and its lack of direct competition aside from the still-strong holdover Aquaman were enough to power it to a good, if not eye-popping, opening. It also benefitted from being the first blockbuster franchise release of 2019 in a field still mainly consisting of holdovers from the holiday season.

Whether Glass can continue the momentum beyond its opening weekend is an open question. Reviews were by far the worst of the trilogy, and that appears to have been a factor in lowering its appeal among the more-discerning over-25 crowd, which represents a significant portion of Glass audience than for a typical genre release. Its performance going forward will depend strongly on word-of-mouth, and that could go either way. On the plus side, the film has little in the way of direct competition over the next couple of weeks. As the Sony Pictures’ superhero blockbuster Venom demonstrated last year, audience tastes don’t always align with those of critics. If that division holds here, Glass could conceivably earn more $100 million by the end of its run.

Bringing in $15.01 million for the three-day wekeend and $18.37 million over the four-day weekend in second place was the previous weekend’s surprisingly-robust newcomer STX Entertainment’s The Upside, which dropped just 26.3 percent from its $20.36 million debut. Its total through Monday is $46.68 million, an excellent total made possible by strong word-of-mouth and little competition. Notably, the Kevin Hart-Bryan Cranston dramedy boasts audience scores, which suggests moviegoers paid little attention to its lukewarm reception from critics. Of course, that is typical for a Kevin Hart movie, as few of his hits have been particularly well-received by critics.

Dipping one spot to third place for the long weekend was Warner Bros. Pictures’ Aquaman, which brought in $10.18 million over the three-day and $12.75 million over the four-day. That is a drop of just 41.33 percent from the last three-day period despite more robust-than-usual competition from Glass. Including Monday earnings, the DC superhero blockbuster has grossed $306.75 so far domesically, making it the fourth DC Extended Universe film to cross the $300 million mark after Wonder Woman, Batman v. Superman: Dawn of Justice and Suicide Squad. It also ranks as the sixth highest-grossing release of 2018 just behind Deadpool 2 with $318.4 million or $324.5 million if you count grosses from the PG-13 re-release of the film under the title Once Upon a Deadpool in December. 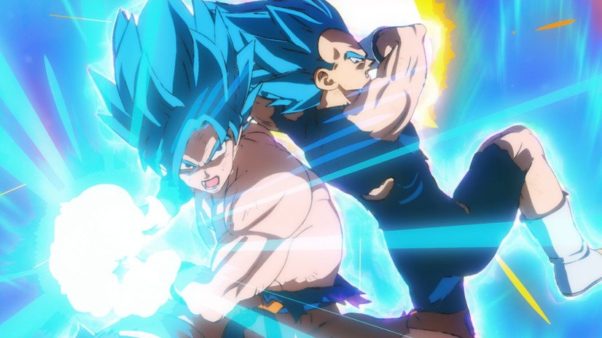 Making a surprise appearance in fourth place was FUNimation Films’ animated global hit Dragon Ball Super: Broly, which after bringing in a combined $10.4 million last Wednesday and Thursday grossed $9.81 million over the three-day weekend and $11.94 million over the four-day. That gives the film a $22.36 million total through Monday, an impressive result for a film essentially playing in limited release.

The holiday season’s other superhero title, Sony’s Spider-Man: Into the Spider-Verse, dropped into fifth place with $7.57 million over the three-day period and $10.15 million over the four-day, a dip of just 16.4 percent from last weekend’s three-day gross. The sturdy animated feature has brought in a superb $161.15 million through Monday.

In sixth place, Sony’s A Dog’s Way Home slipped 36.1 percent to $7.57 million three-day total in its second weekend and $9.92 million for the four-day, which would give it $24.09 million through Monday. That is a pretty good hold for the PG release, though not quite as strong as many had predicted going into the weekend.

Seventh place in the long weekend wen to Walt Disney Studios’ Mary Poppins Returns with $5.21 million over the three-day and $7.16 million over the four-day for a total of $160.65 million domestically so far. It fell 31.9 percent compared to the previous weekend’s total.

In eighth place, Sony’s Escape Room earned $5.61 million in its third weekend over the three-day period, a 37.2 percent drop, and $6.81 million over the four-day. That gives the surprise-hit horror-thriller a healthy $42.24 million through Monday.

This week’s new openings are 20th Century Fox’s The Kid Who Who Would Be King and Aviron’s Serenity.