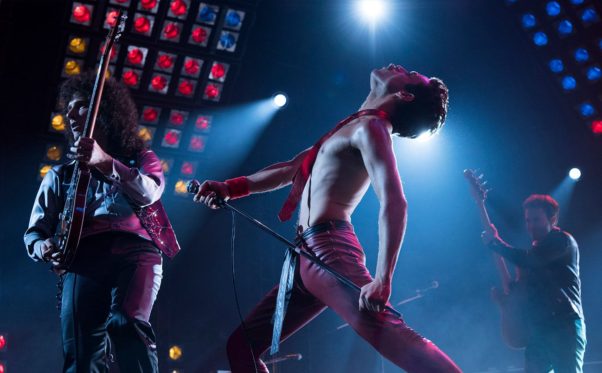 Bohemian Rhapsody, the story of rock group Queen, was the champion at theaters finishing in first with a $51.06 million debut.
(Photo: 20th Century Fox)

Not only did it open higher than expected, but if its run proves to be in a league with recent musical dramas like A Star Is Born and The Greatest Showman, the film’s final earnings could be quite impressive, topping $150 million and possibly $200 million.

Bohemian Rhapsody endured word of a troubled production as it took eight years to produce the biopic. It scored excellent reviews from moviegoers, and looking ahead there is little in the way of direct competition over the next month or so. Opening weekend audiences were 51 percent female with 78 percent of the crowd 25 years or older.

For the first time since early February, the top three films were all new releases. Walt Disney Studios’ The Nutcracker and the Four Realms finished at the lower end of expectations with $20.35 million in second place. Not helping matters were mediocre critical reviews and only satisfactory audience scores. It hopes to make the bulk of its box office over the next two months as Christmas approaches, which may be challenging as it faces The Grinch opening next week.

Disney’s The Nutcracker and the Four Realms opened in second with $20.35 million, but faces a fight next weekend with the debut of The Grinch. (Photo: Walt Disney Studios)

Finishing in third was Paramount Pictures’ Nobody’s Fool with $13.74 million. The R-rated Tyler Perry comedy stars Tiffany Haddish and was well-received by opening day audiences. The film played to an audience that was 61 percent female with 77 percent of the audience aged 18-44.

In fourth place was Warner Bros. Pictures’ A Star is Born with $11.00 million, down just 21.6 percent. That brings its total domestic earnings through five weekends to $165.54 million. It will be interesting to see how well the two music-driven dramas coexist over the coming weeks as last weekend clearly indicated there is more than enough audience for both. One thing working in their favor is the difference in tone between the two films. The PG-13-rated Bohemian Rhapsody could have gone the R-rated route, which might have taken a huge chunk out of its box office potential, especially considering A Star is Born pretty much owns that segment of the audience right now.

Rounding out the top five was Universal Pictures’ Halloween, which plummeted 65.5 percent as it entered its third week, taking in $10.83 million for a domestic total of $150.22 million.

Just outside the top five in sixth place, Sony Pictures’ Venom had a strong fifth weekend hold, slipping just 26.01 percent to $7.88 million. That brings its domestic gross to $198.69 million, and it will cross the $200 million mark later this week.

In seventh place was Warner Bros. Smallfoot with $3.86 million, a dip of 18.9 percent and up one spot from the previous weekend. Sony’s Goosebumps 2: Haunted House fell 48.2 percent to eighth place with $3.77 million. Its North American total stands at $43.91 million after six weekend and will probably fall out of the top 10 next weekend. In ninth place was Lionsgate Films/Summit Entertainment’s submarine thriller Hunter Killer with $3.53 million, down 46.9 percent. Its domestic earnings total $12.97 after two weekends as it heads out of the top 10. And finishing in 10th place was 20th Century Fox’s The Hate U Give with $3.35 million, a fall of 34.3 percent. Its domestic gross now stands at $23.41 million after five weekends.

In limited release, Amazon Studios’ Beautiful Boy earned $1.35 million, pushing its domestic total to $3.15 million and Focus Features’ Boy Erased brought in $207,057 from just five locations. The Joel Edgerton-directed feature will expand its reach next weekend into 75 theaters in 25 markets.
.
Next weekend sees the release of Universal and Illumination’s Dr. Seuss’ The Grinch in more than 4,000 locations along with Sony’s second attempt at the Dragon Tattoo series with The Girl in the Spider’s Web in about3,000 theaters and Paramount’s well-reviewed Overlord debuting in approximately 2,500 locations.