From Balitmore to Austin

The Kingbird restaurant inside the Watergate Hotel, 2650 Virginia Ave. NW, has brought four of the nation’s most critically-acclaimed breakfast hotspots to the city as part of its Best Breakfast in America promotion. 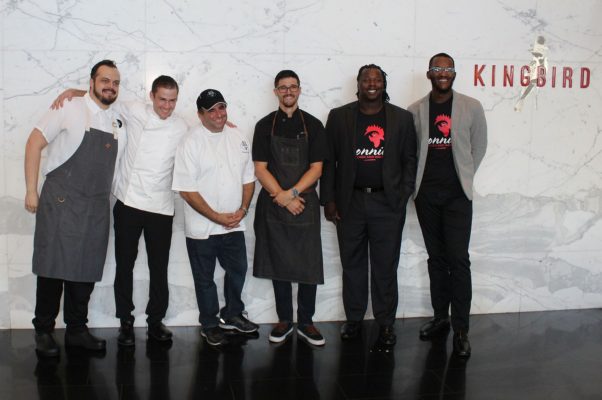 All the chefs were in town for the kick off of Best Breakfast in America on Sept. 26 including Michael Galen of Dusek’s (l to r), Kingbird chef de cuisine Noah Poses, Daniel Surfer of Blue Collar, Patrick Jackson of Paperboy and Khari and Shawn Parker of Connie’s Chicken & Waffles. (Photo: Mark Heckathorn/DC on Heels)

The restaurant is featuring signature breakfast dishes from Connie’s Chicken & Waffles in Baltimore, Paperboy in Austin, Texas, Blue Collar in Miami and Dusek’s in Chicago.

“With the launch of this limited-time initiative, we are adding exclusive items to the Watergate Hotel’s breakfast menu to highlight some of the country’s best breakfast hotspots,” said Noah Poses, chef de cuisine. “We found unique restaurants across the U.S. and had them chose their most well-known dishes to add versatility to our new menu and establish the hotel as the ultimate breakfast in town.”

The featured restaurants and their signature dishes are: 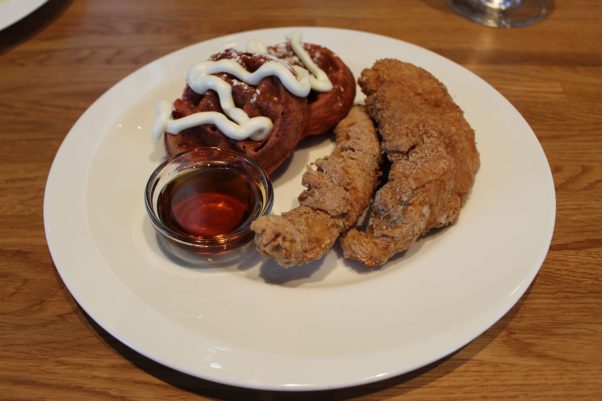 The chicken tenders and red velvet waffles ($18) from Connie’s Chicken & Waffles in Baltimore are delicious. Helmed by brothers Shawn and Khari Parker, the restaurant has locations in the city’s Lexington Market and Charles Plaza near Inner Harbor.

Unlike the restaurant, which serves one regular-sized waffle, Kingbird is serving two mini red velvet waffles with two chicken tenders. Unfortunately, the kitchen staff at Kingbird either didn’t marinate the chicken tenders in Connie’s special spices or at least not enough of them because, while the waffles were spot on, the chicken tenders were a bit bland. 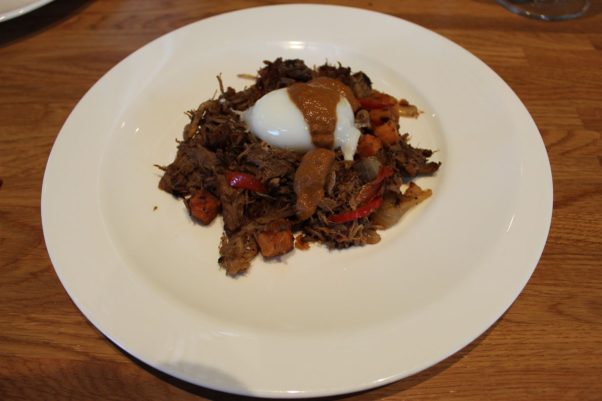 The Texas hash ($15) from Paperboy in Austin, Texas, was the best dish out of the four. Chef Patrick Jackson’s hash made with coffee-brined pork, sweet potatoes, peppers and onions is topped with a poached egg and finished with a pecan mole on top. The mole has just the right amount of kick to it.

Paperboy is currently a two-food truck operation, but plans to break ground in two weeks for its first brick-and-mortar location, Jackson told DC on Heels. “I’m excited to see it served on plates since we usually serve it in paper boats” from the food trucks, he added. 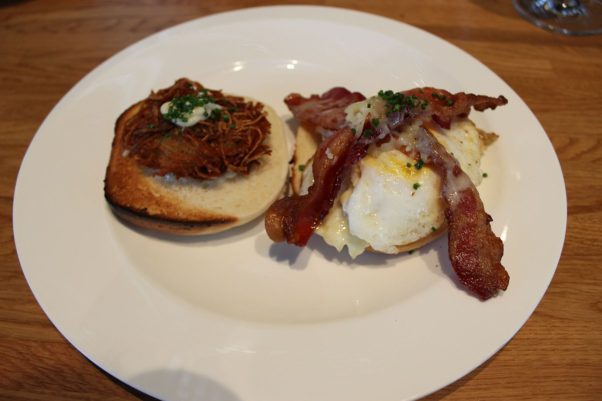 The egg sandwich from Blue Collar in Miami with two eggs over easy, a potato latke, white cheddar, bacon and garlic aioli on a sweet Portuguese muffin. (Photo: Mark Heckathorn/DC on Heels)

The egg yolks on my first dish were either overcooked or had been sitting under a heat lamp too long, since the dish came out way too quickly to have been freshly made. But after remaking it, it was a good, but messy dish, with the runny yellows oozing down the sides of the sandwich. 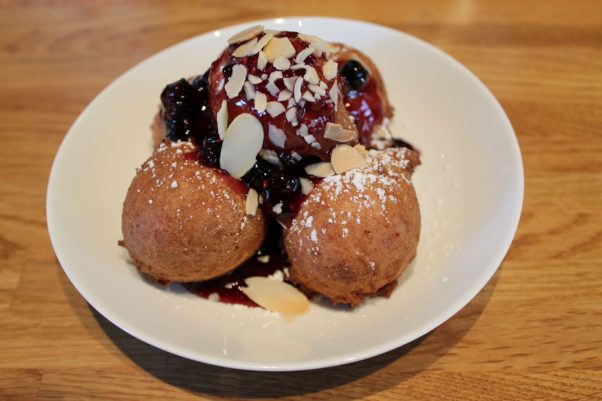 Beignets with blueberry jam, powdered sugar and sliced and roasted almonds from Ducek’s in Chicago.
(Photo: Mark Heckathorn/DC on Heels)

Ricotta beignets ($11) with seasonal jam, powdered sugar and sliced and roasted almonds from chef Michael Galen of Dusek’s in Chicago rounds out the offerings.

This was my least favorite. I couldn’t taste the ricotta and the seasonal blueberry jam – blueberries are out of season here – tasted like canned blueberries you find on your pancakes at IHOP or on top of a sundae at Dairy Queen. Besides, real beignets come from New Orleans, not Chicago.

All four dishes will be on the menu from 6:30-11 a.m. daily for the next six weeks throughout the fall.