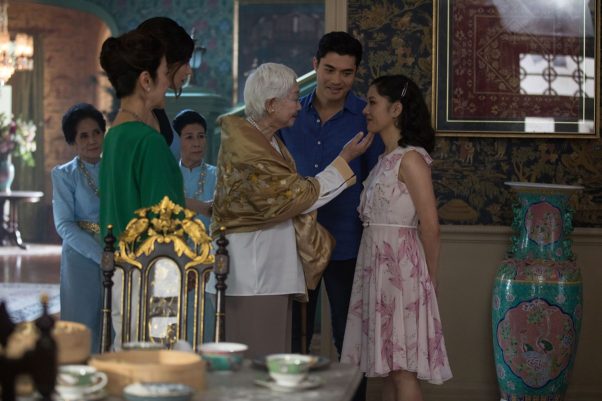 Crazy Rich Asians led for a second weekend with $24.81 million, a 6.4 percent drop for its deubt. That is the smallest second-weekend drop in 2018. (Photo: Warner Bros. Pictures)

Almost all the movies that have ever fallen that mildly during their second weekends — or even gained relative to their debuts — saw their second weekend coincide with a holiday. Crazy Rich Asians had no holiday boost, instead relying solely on positive word of mouth and terrific audience reception to keep its momentum going. Only two movies have posted better second-weekend holds without the benefit of a holiday: Puss in Boots with a 3.0 percent drop and Brother Bear, which fell 4.5 percent. And it should be noted that Brother Bear expanded to a wide release on a Saturday, depressing its wide opening weekend in the first place.

With $76.62 million earned after just 12 days, Crazy Rich Asians has officially surpassed all expectations as it continues to dominate at the North American box office. The film has not only tapped into a gravely underserved audience, namely Asian-American moviegoers, but has clearly broken out beyond that with word-of-mouth and repeat viewings propelling it to an incredible second-weekend performance. It is now set to easily become the 18th title of this year to top $100 million, although with that small of a drop there is no telling how high it might go. While industry observers had expected a strong second-weekend performance, few anticipated that it would hold quite so well.

Crazy Rich Asians is also notable for being arguably the lone breakout hit among this year’s adult-driven comedies, which have been unusually weak; none have topped $100 million, or even $70 million, before now. That makes it the top-grossing comedy of 2018 so far after less than two weeks of release, and it is set to potentially double 2018’s previous highest-grossing comedy Game Night, which topped out at just over $69 million in North America after debuting to $17 million in February. That makes Crazy Rich Asians not only one of the biggest movie stories of 2018, but one of the most exciting box office stories as well, as it performs beyond all expectations and appears primed to play strongly well into fall.

Warner Bros.’ surprise-hit shark thriller The Meg held onto second place with $12.81 million, a 39.4 percent drop for total domestic earnings of $105.08 million after three weekends. That makes it the 17th release of the year to top the $100 million mark domestically. While the box office is up almost 10 percent from last year, the number of $100 million-plus releases is down a bit from 2017, when 20 films had reached that milestone by the same point.

Opening well below expectations in third place with $9.53 million was STX Entertainment’s R-rated comedy The Happytime Murders. That makes it the lowest post-Bridesmaids opening ever for star Melissa McCarthy, whose Life of the Party similarly opened at the lower end of expectations when it debuted to $17.8 million in May before earning a total of $52.8 million domestically.

The Muppet comedy directed by Jim Henson’s son Brian wasn’t helped by poor reviews and poor word-of-mouth. Observers had been expecting a debut in the mid-teens, but after opening to just $3.95 million on Friday, it became clear the movie wouldn’t come near that amount.

Hanging on in fourth place was Paramount Pictures’ Mission: Impossible – Fallout with $8.09 million, a 24.9 percent drop in its fifth weekend for a total of $193.99 million, bringing the franchise installment closer to the $200 million mark. Look for it to surpass Mission: Impossible – Rogue Nation’s $195 million total by this coming weekend.

In fifth place was STX’s Mile 22, which fell 53.5 percent to $6.37 million in its second weekend, giving the latest Mark Wahlberg-Peter Berg collaboration just $25.51 million after 10 days. Although it should surpass the $31.8 million final domestic gross of their last film together, 2016’s Patriots Day, it is clearly not the franchise-starter they were hoping for.

In seventh, another freshman release from last weekend, Studio 8’s Alpha, took in $6.00 million, representing a 42.0 percent drop from its slightly better-than-expected $10.35 million debut. The historical adventure saga, which takes place 20,000 years in the past and has its characters speaking a fictional language, scored with critics but seems to have been too difficult a sell to audiences. Its total now stands at $20.56 million after 10 days – not great considering the film’s reported budget of $50 million.

Eighth place went to Focus Features’ BlacKkKlansman, which posted another strong hold in its third weekend with $5.10 million, a 30.9 percent drop from the previous weekend. That gives the Spike Lee release a domestic total of $31.79 million to date. It now sits in fifth place among Lee’s films domestically, having surpassed 1989’s Do the Right Thing without adjusting for inflation and soon will top the $32.4 million gross of 1991’s Jungle Fever.

Finishing in ninth place was Sony Pictures’ teen-targeted horror flick Slender Man with $2.79 million, a 25.4 percent fall in its third weekend. The domestic gross for the $10 million release now stands at a decent $25.41 million.

Rounding out the Top 10 was Global Road Entertainment’s sci-fi/adventure film A.X.L. with $2.78 million in its debut weekend. While that great, it is not a surprise as no one had predicted an opening anywhere above the low-single-digit millions. It didn’t help that the movie scored poorly with critics, although it did fare better with audiences. The film’s release comes amidst news of Global Road’s financial troubles, with the company reportedly in danger of declaring bankruptcy. The studio’s previous releases include this year’s Show Dogs, Midnight Sun and Hotel Artemis.

The top 10 films grossed $84.54 million last weekend. That is 23.6 percent lower than the $110.71 million total the previous weekend. However, it is 83.3 percent ahead of the $46.11 million earned on the same weekend last year, when The Hitman’s Bodyguard led with $10.26 million for the second weekend. Total box office year-to-date stands at $8.15 billion. That is 9.8 percent ahead of last year.