The sequel to 2015’s Jurassic World came in on the high end of expectations, but still a long way from the $208.8 million brought in by the previous installment on its debut weekend. By every other measure, it was a fantastic debut. Among 2018 releases, it is the fourth-largest opening weekend of the year so far, behind only Avengers: Infinity War with $257.6 million, Black Panther with $202 million and the previous weekend’s Incredibles 2 with $182.6 million. It also ranks as the 20th highest debut of all time – or 32nd highest if adjusted for inflation — just ahead of Furious 7 with $147.1 million and just behind Spider-Man 3 with $151.1 million. It is also the second-highest opening weekend in the studio’s history after Jurassic World.

The first Jurassic World was a phenomenon when it debuted three years ago, setting the bar for the franchise. But it followed a 14-year franchise drought since, as it was the first film in the series since 2001’s Jurassic Park III. Because of that, much of the film’s box office take was the result of nostalgia for audiences who had been craving more dino action in the decade-plus that the series had laid dormant.

Fallen Kingdom may also have taken a hit from the presence of Walt Disney Studios-Pixar’s Incredibles 2. With an $80.35 million in its second weekend — higher than the first Incredibles’ opening weekend — the animated sequel finished in second place, hitting a much broader audience than almost anyone predicted.

Incredibles 2 has grossed $348.79 after 10 days, 18 percent higher than previous Pixar record-holder Finding Dory at the same point in its run. That said, it was considerably more front-loaded than its predecessor, as its 56 percent drop was larger than Finding Dory’ 46 percent, although the latter wasn’t up against a behemoth like Jurassic World. Incredibles 2 will surely set an all-time record for a Pixar release by the end of its run, easily eclipsing Finding Dory’s $486.2 million total. Amazingly, the sequel surpassed the lifetime domestic gross of the original Incredibles in just seven days.

Third place went to Warner Bros. Pictures’ Ocean’s 8 with $11.55 million in its third weekend for a domestic total of $100.28 million. It passed the $100 million mark after 17 days. In comparison, that milestone was reached by Ocean’s Eleven in 19 days, Ocean’s Twelve in 22 days and Ocean’s Thirteen in 23 days, although ticket prices were much cheaper. Last weekend’s total gives the franchise a domestic total of more than $526 million over four installments.

In fourth place, Warner Bros.’ Tag held well in its second weekend, dropping 44.8 percent to $8.25 million. That brings the R-rated comedy’s total to $30.42 million after 10 days. In comparison, that is about 9 percent behind Game Night and 19 percent behind Blockers at the same point. 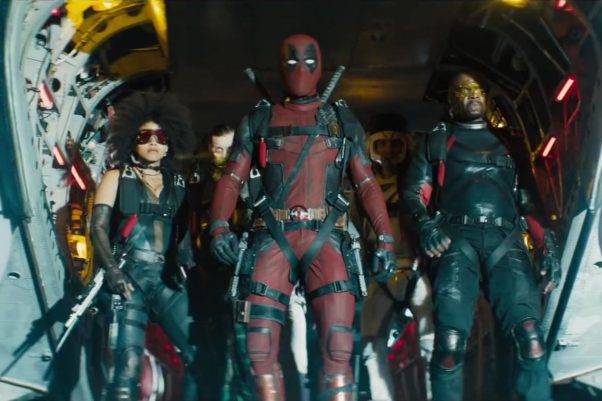 Deadpool 2 is still in fifth place, even after six weeks in theaters. (Photo: 20th Century Fox)

Twentieth Century Fox’s Deadpool 2, which crossed the $300 million mark with $5.27 million in its sixth weekend held on to fifth place. The superhero sequel now stands at $304.17 million, about 11 percent off from the first film at the same point.

Sixth place went to Disney-Lucasfilm’s Solo: A Star Wars Story, which rang up $4.51 million in its fifth weekend, putting it over the $200 million mark in North America. While that milestone would be cause for celebration for most any other movie, the fact that it took the Star Wars spin-off a month to reach that total ranks as a big disappointment given that the three previous entries each topped the $200 million mark in just a few days. With $202.64 million domestically and $353.3 million globally, Solo is now expected to finish as the lowest-grossing installment in the history of the franchise worldwide including Episodes IV-VI. Domestically, it should finish somewhere between the original runs of 1980’s The Empire Strikes Back with $209 million and 1983’s Return of the Jedi with $252.5 million.

A24’s Hereditary finished in seventh place with $3.63 million for a total of $34.82 million after three weeks. The horror flick is currently the second highest-grossing film in A24’s history after Lady Bird, which finished with $48.9 million earlier this year.

Rounding out the Top 10, Sony Pictures’ Superfly fell to eighth place in its second weekend with an estimated $3.40 million. The remake’s domestic total now stands at $15.32 million. In ninth place, Disney-Marvel Studio’s Avengers: Infinity War added another $2.58 million in its ninth weekend for a $669.57 million total. And just cracking the Top 10 was Focus Features’ Won’t You Be My Neighbor? with $1.82 million from 348 theaters in its third weekend of limited release, giving it a total of $4.08 million.