There were no big surprises last weekend (June 1-3) as Walt Disney Entertainment and Lucasfilm’s Solo: A Star Wars Story fell a hefty 65.2 percent from its opening weekend and the week’s new releases hardly made a dent. 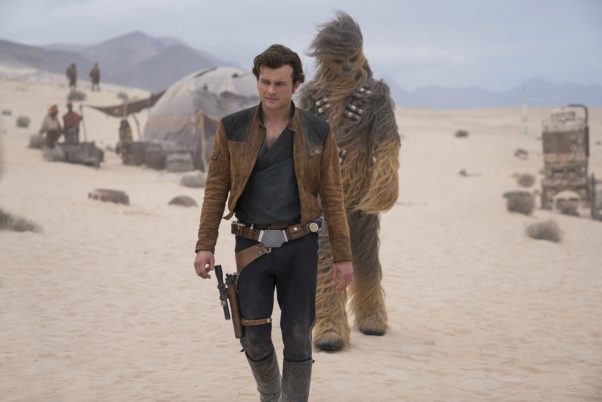 Solo: A Star Wars Story finished in first place over the weekend with $29.40 million. Many wonder if Star Wars fatigue has set in since it is well below the last two franchiese installments. (Photo: Jonathan Olley/Lucasfilms)

However, Solo managed to hang on to first place with $29.40 million. The film looks to be falling in line with past Memorial Day openers like X-Men: Days of Future Past, X-Men: Apocalypse and Fast & Furious 6. With $148.99 million earned domestically through 10 days of play, Solo is well behind its two recent predecessors in the sci-fi franchise. The 2016 film Rogue One: A Star Wars Story made $64 million in its second weekend while last year’s Star Wars: The Last Jedi did even better with $71 million.

Many wonder if Star Wars fatigue has set in or was it simply that someone besides Harrison Ford played Han Solo? Unknown Alden Ehrenreich was cast as the younger version of the swashbuckling space pilot. Disney had a good thing going releasing the Star Wars films a year apart in December, but with Solo, it jumped ahead to May. That was only 5 months after the last installment, hardly allowing anticipation to build up. Add to the a coming TV series, a Boba Fett movie and a new Star Wars trilogy coming, plus a separate series of films from David Benioff and D.B. Weiss. May is also a farm more competitive release date, with Dead Pool 2 and Avengers: Infinity War still taking in a lot of box-office dollars.

Marvel Studios and 20th Century Fox’s Deadpool 2 dropped 46.7 percent to $23.18 million in its third weekend to finish in second place. Its domestic gross is a solid $254.51 million after 17 days — off about 10 percent from the pace of the first film, which was generally expected. It climbed back to the top of the international charts, bringing in an estimate $41.5 million, pushing its international tally to about $344 million, just shy of $500 million globally, moving into the top 150 of all time.

STX’s newcomer Adrift starring Shailene Woodley posted an opening weekend of $11.60 million to finish in third place – short of expectations. It may have trouble reaching $30 million domestically, and it had a reported $35 million budget, as it continues to contend with a barrage of summer releases.

In fourth place, Disney and Marvel’s Avengers: Infinity War took in another $10.51 million over the weekend, bringing its domestic total to a whopping $643.01 million. The Marvel behemoth remains on course to overtake Jurassic World with $652.3 million early this month as the fifth highest grossing film of all-time in North America. It is about $35 million shy of becoming only the fourth film to have ever topped $2 billion worldwide.

Paramount Pictures’ Book Club finished in fifth place with another $7.04 million, a slip of only 30.1 percent, as it continues to successfully counter-program. With $42.6 million in the bank so far, look for a weekend around $7.1 million. Its domestic total stands at $47.56 million after 17 days.

Meanwhile, BH Tilt’s micro-budgeted newcomer Upgrade debuted higher than expected with $4.67 million. It had the best reviews among the new titles and is on track for a solid run, possibly topping $10 million.

In seventh place was Warner Bros. Pictures’ Life of the Party, which fell 34.3 percent to $3.50 million and $46.35 million after four weekends. Eighth place went to Universal Pictures’ Breaking In, which earned $2.81 million, down 34.3 percent for a grand total of $41.34 million.

Paramount’s Action Point starring Johnny Knoxville as an amusement park owner, proved to be a misfire with $2.93 million based on its reported $19 million budget. It ranks among the worst openings ever for a film debuting in more than 2,000 location.

Rounding out the top 10 was Overboard, which fell 37.7 percent to $1.95 million. That brings its earnings to $45.50 million and makes it the highest grossing release for Lionsgate’s Pantelion label.