Lupo Marino Is Now Open at the Wharf

Lupo Marino from the people behind 14th Street NW’s Lupo Verde opened on Friday at the new Wharf development, 40 Pearl St. SW, on the Southwest Waterfront. 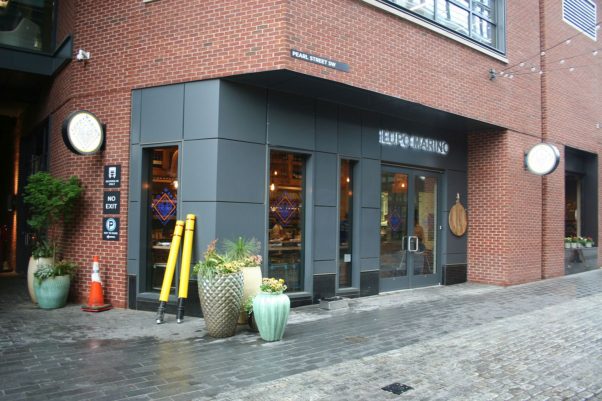 Areetoon Jayanan Architecture & Interior Design created the intimate 2,000-square foot space with a Mediterranean feel. It includes a color palate of blues and slate gray with light wood tables and banquettes, and dark wood chairs and stools with gray painted cement floors. The light fixtures are designed to look like Sicilian fishing baskets, and there is a white marble bar. 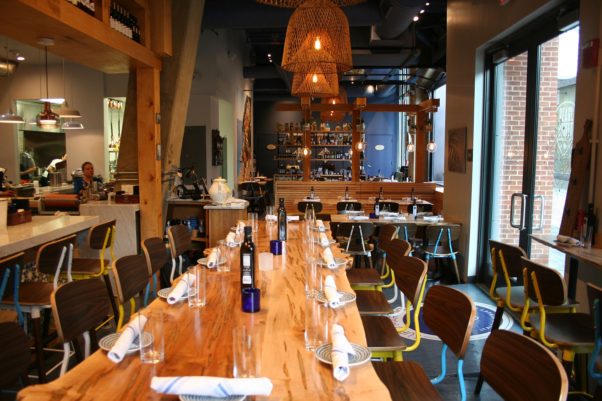 Inside the intimate restaurant is seating for 68 diners. (Photo: Mark Heckathorn/DC on Heels)

The restaurant seats 68, which includes eight seats at the bar and 12 seats at a communal table in the lounge area made from a tree and another 10 seats that line a window-front ledge, which looks out onto Pearl Street, that is also made from a tree. An outdoor patio with seating for 28 will also be available during the spring and summer.

Unlike the other big, expensive restaurants that fill the Wharf, owner Med Lahlou said he wanted Lupo Marino to be reminiscent of the mom and pop shops that serve simple street food in Bologna or along the Amalfi Coast. A large photo mural Positano, the region’s largest village, hangs on a wall in the dining room. There is also a counter for passersby to pick up coffer or freshly-baked breads and pastries to go.

“I wanted it to be casual and laid-back serving fresh, high-end, seasonal product,” Lahlou told DC on Heels. “I want this to be a neighborhood place” for the people who live at the Wharf. 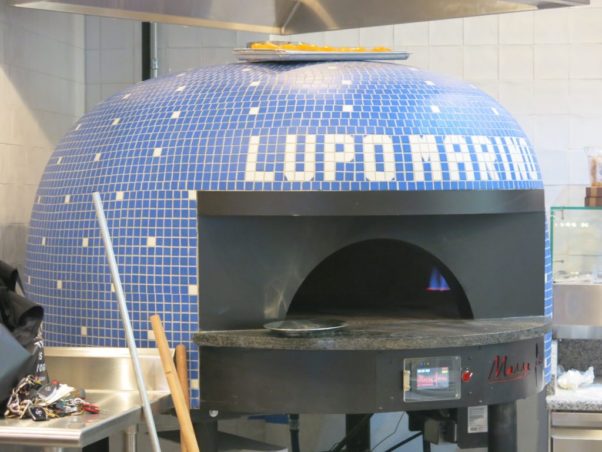 A 1,200-pound brick over will be used to cook pizza, panini, whole fish and roasted vegetables. (Photo: Mark Heckathorn/DC on Heels)

Todd Sprik, who was born in Chicago and raised in Wisconsin, has been tapped to serve as executive chef. He brings 10 years of culinary experience relocating from Florida. He was most recently the chef de cuisine of South Beach’s Byblos Miami. During his seven-years in Florida, he also served as the sous chef of Stephen Starr’s Le Zoo in Bal Harbour for one year and cooked for three years at Scarpetta by Scott Conant in Miami’s Fontainebleau. He moved to Florida in September 2011 to help Giovanni Rocchio open Valentino’s Cucina Italiana in Fort Lauderdale.

Sprik earned his culinary arts degree at the French Culinary Institute in New York in 2008. While studying in Manhattan, he worked at Bayard’s Events and Catering and interned at Bouley restaurant, later securing a job for two years at the now-shuttered Shorty’s.32. In 2009, he joined Gabriel Kreuther at The Modern in the MOMA. During his tenure he assisted with three James Beard House dinners with notable chefs Jean-George Vongerichten, Gabriel Kreuther and Ron Gallo. In 2010, he accepted a position as a line cook at Il Buco and one year later, was named chef de partie at the former Colicchio & Sons. In 2012, he relocated to South Florida. 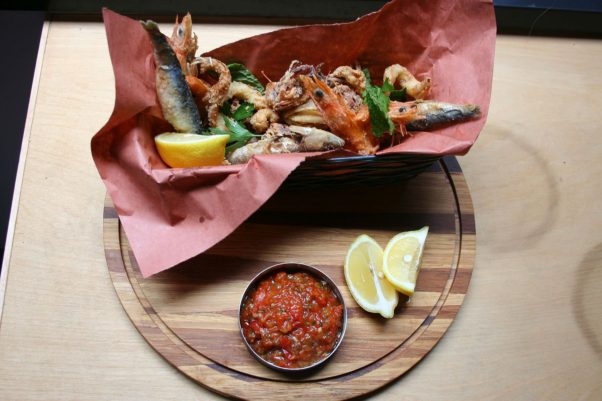 Sprik and his team will be making everything from scratch in-house including breads and pastries, pastas, mozzarella cheese and the pizzas. The custom-made oven will be used to make the pizzas and paninis, along with whole fish and roasted vegetables.

The opening menu includes appetizers like frito mixto with calamari, sardines, clams and head-on prawns served with burnt lemon and croquetas with bacalao and fresh horseradish priced from $10-$14; salads including the uovo salad with duck egg, asparagus, rocket and bottarga; pompelmo with grapefruit, fennel, mojamo and citrus vinaigrette priced from $10-$16. There are six specialty pizzas including the Lupo Marino with porchetta, roasted pepper relish, broccolini and pecorino; the San Daniel with prosciutto cruso, arugula and olive oil; fungi pizza with garlic confit, foraged mushrooms, pecorino crema, preserved lemon and oregano all priced at $15 and a build-your-own option that begins a $10. 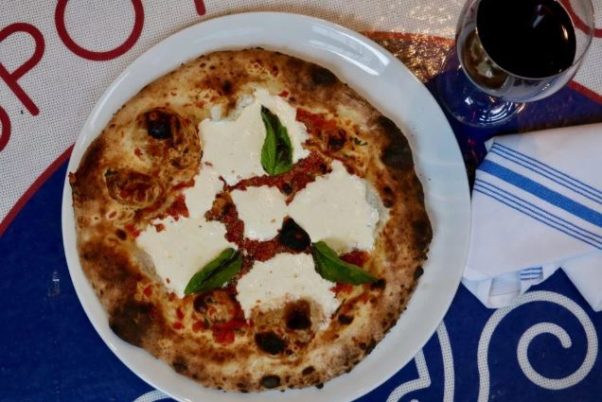 There are six specialty pizzas and a build-your-own option on the menu. (Photo: Evy Mages)

House-made pastsas priced from $20-$24 include spaghetti verde with wild pork carbonara, cured egg yolk and spring peas; tagliatelle with blue crab, Calabrian chile and lemon parsley gremolata; and gnocchi with asparagus, wild mushrooms, fonduta and pickled ramp. Paninis priced from $13-$17 include porchetta with pesto, gorgonzola and ciabatta; confit tuna with escarole, taggiasca olive, roasted pepper relish and lemon aioli. While entrées such as a grilled 14-ounce N.Y. Shrip steak with marinated peppers and anchovy butter; half a Cornish hen with cannellini, braised escarole and preserved lemon; and dorado with faro, chermoula and pickled beets are priced from $32-$38. Bar snacks are $7 and desserts are $10.

The bar program includes a selection of signature cocktails priced from $12-$14. Drinks will include the Menta with bourbon, C3 Carciofo artichoke liqueur, Amaro don Fernet and orange; Peppino with gin, limoncello, lemon juice, Prosecco and bitters; and the Toto with vodka, mandarin, lemon juice, white vermouth and basil. There are also 54 exclusively Italian wines available by the bottle and 14 by the glass. Prices range from $12-$17 by the glass and from $40-$150 by the bottle, with a majority of the bottles available for under $60.