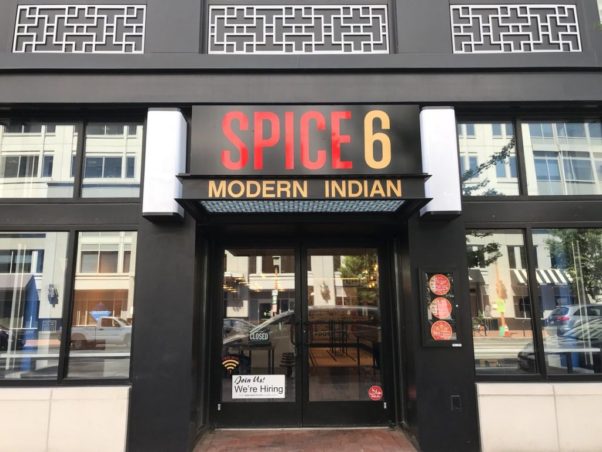 The restaurant, which also has locations in Hyattsville and Vienna, will open a fourth location in the Westfield Montgomery mall later this year.

The Chinatown location serves traditional Southern Indian fare and also offers a full vegetarian and vegan menu. It also serves made-to-order traditional dosas, a South Indian style rice and lentil crepe that is stuffed with fillings like spiced mashed potatoes and onions, and uttapam. There are also rice bowls, which diners can choose their protein and curry flavor, kebabs and naan wraps on the menu.

All curries, sauces, yogurt, paneer and naan are made in house. The naan is made-to-order in a traditional tandoori oven.

The Smith opens second location on U Street 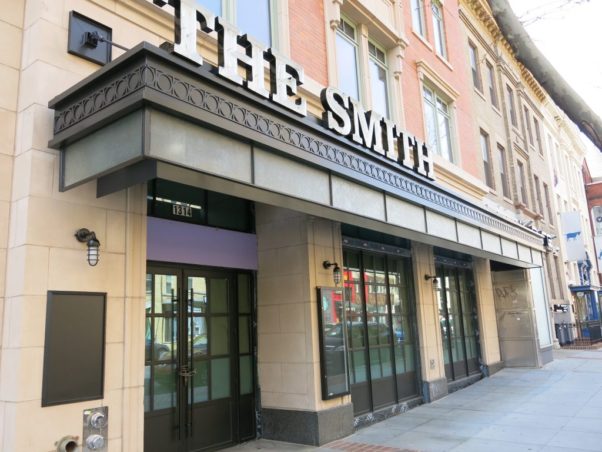 The newest location features bistro classics, an expanded raw bar and favorites like mac and cheese and pot of mussels. The U Street location will offer brunch seven days a week as well as a selection of shareable main courses. New menu items include spicy fried chicken, lobster paella, square pizzas and house-made pastas.

There is also a new cocktail program anchored by a 25-seat curved zinc bar. The new cocktail menu features small batch and local liquors, seasonal produce and house-made syrups and shrubs. It also features house-made tonic and ginger beer on tap, a French 75 slushie and giant punch bowls. The wine program features more 20 wines by the glass or carafe. Customers can also order local beers on draught and by the bottle.

The restaurant has an industrial-inspired interior offset with classic brasserie elements, including white and black marble flooring in geometric patterns, smoked antique mirrors inlaid on porcelain subway tile columns and dark walnut textured wood tabletops. Wall sconces and globe-like fixtures with black bronze framing are installed throughout the space to give off a soft glow. A private dining room can seat 30 guests. A photo booth — a favorite from the restaurant’s original location in New York City’s East Village neighborhood – is located near the restrooms.

The Smith is open for dinner from 5 p.m.-midnight Sunday through Wednesday and 5 p.m.-1 a.m. Thursday through Saturday. Weekend brunch is slated to launch mid-May with weekday brunch and breakfast to follow. 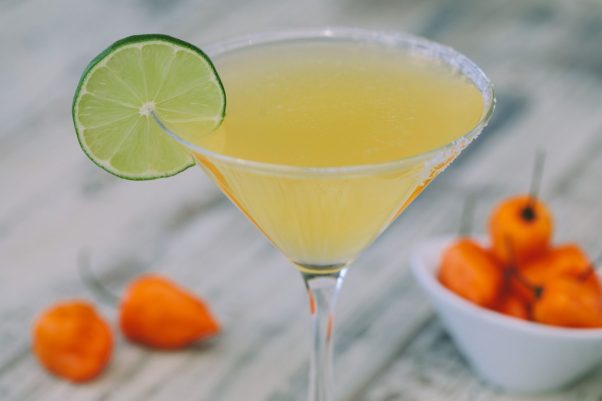 Available through the end of September, each is made from fresh seasonal ingredients and are priced from $9-$12.

Teachers get a free milkshake on Tuesday at Zinburger in honor of National Teacher Appreciation Day. No purchase necessary. (Photo: Zinburger)

All 15 east coast locations of Zinburger Wine & Burger Bar including those at Springfield Town Center and Arundel Mills Mall will give teachers a special treat on Tuesday, May 8, in honor of National Teacher Appreciation Day.

Zinburger is offering a free shake to teachers and administrators. The offer is not available for take-out and no purchase is required. 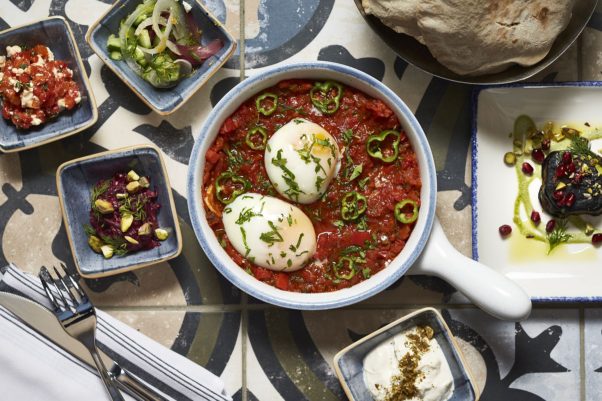 Sababa will begin serving an Israeli brunch this weekend. Dishes include this shashuka. (Photo: Greg Powers)

The menu will include salads, hummus, mezze and kebabs off the regular menu along with a selection of Israeli breakfast favorites. Small plates include charred eggplant with herbed labneh, pomegranate and pistachio; roasted halloumi with dates, honey and charred lemon; Israeli salad with cucumber, tomato, onion, mango and pickled Sharon fruit; grilled sardine with feta, walnut and charred zucchini; and taameya with fava bean falafel and harissa tahini. Israeli breakfast dishes include shakshuka with poached egg and tomato-chili broth; lamb and eggs, served on pita with harissa hummus; konafi French toast with sweet labne and pistachio; and ful mudammas, served on hummus with poached egg. Items range from $7-$16.

Brunch-goers can select from house-made sodas and juices including pomegranate-rosehip soda with sumac, rose and pepper; lavender-borage soda with rosemary and lemon; halva juice with carrot juice, lemon, pistachio and cardamom; and haifa juice with sundried tomato, red pepper, garlic and herbs all priced from $5-$7. A selection of brunch cocktails is also available and include Ptolemy’s Lighthouse with sparkling wine, grapefruit, Capitoline and charred lemon; Zephyr Breeze with Cotton & Reed rum, pomegranate soda, rosehip and sumac; Phoenecian Frappé with Green Hat gin, arak, mint, lavender, and borage; and the Halva World Away with Casamigos añejo, carrot, pistachio orgeat and cardamom. Cocktails are $12 each. 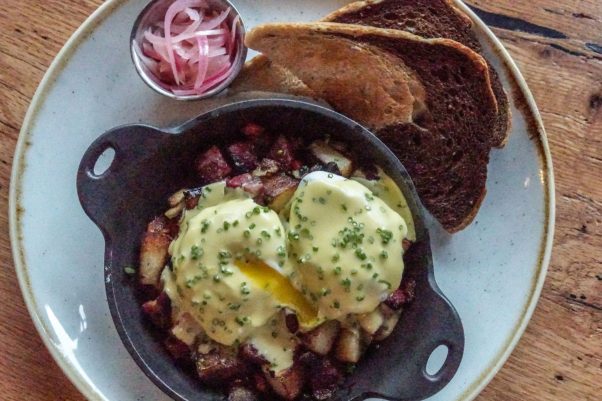 Taking an inspirational cue from Rome’s Jewish Quarter as well New York’s Lower East Side, the new menu features an array of house-made bagels ($11)from group executive pastry chef Alex Levin, in plain, sesame and everything varieties. They come simply toasted with cucumber, tomato, lettuce and cream cheese, as part of a smoked salmon plate ($19) with tomato, cucumber, red onion and capers or with smoked white fish salad ($19). Levin has also added “Alex’s Basket of Goodies,” a shareable basket of his signature hazelnut chocolate crunch rugelach along with warm ricotta bombolini with Nutella and raspberry linzer cookies ($12).

Savory options including crispy potato pancakes with apple sauce and sour cream ($11) and the option to add smoked salmon (+$8) as well as a helping of caviar (+$50). There is a also a Roman pizza topped with zucchini, potato, onion and pecorino ($17). The pastrami and jalapeno hash ($15) is a nod to New York’s Lower East Side neighborhood and is served with poached eggs and Hollandaise sauce.

On Saturday, May 12, the Hay-Adams, 800 16th St. NW, will launch its Stylish Entertaining Series, at the Top of The Hay, a historic setting directly overlooking the White House from 1-2:30 p.m. 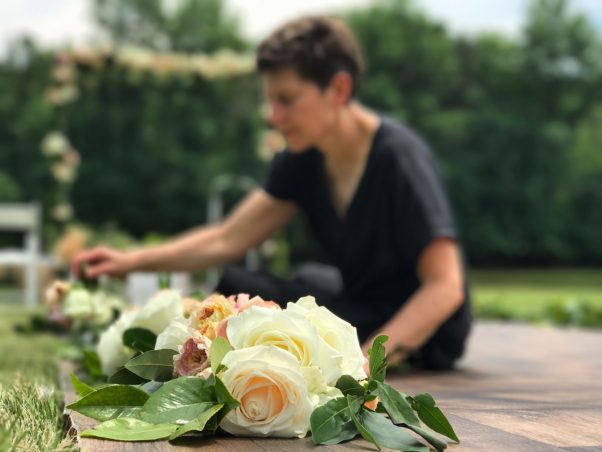 Have afternoon tea and make a floral arrangement with Sidra Foreman at the Hay-Adams this Saturday. (Photo: Hay-Adams)

Participants will enjoy a seasonal selection of pastries along with Domaine La Rocalière Tavel Rosé and Scharffenberger Brut while learning about emerging trends in floral design and making a spring arrangement to take home. Tickets are $65 per person.

Sidra Foreman, a florist, chef and gardener who plans, sources and arranges flowers for weddings and other events, kicks off the series large and small. Her work has been featured in Martha Stewart Weddings, and she was named one of the top floral designers in the U.S. by the magazine.

The quarterly series features experts sharing insights about entertaining with ease in a way that reflects each host’s personal style and creativity. Next up is a champagne tasting class in September.