Starring Dwayne Johnson as a primatologist saddled with the unenviable task of battling giant mutated animals with a penchant for destruction, Rampage debuted just a hair under the first weekend take of Johnson’s December megahit Jumanji: Welcome to the Jungle, which last week overtook Spider-Man as Sony Pictures’ highest-grossing domestic film of all time with over $403 million in North America. But don’t count on Rampage to come anywhere near the total of that film, which benefitted from unusually strong word-of-mouth, decent reviews and a solid two months without any other major competitors in theaters. Rampage faces near-obliteration once Avengers: Infinity War arrives in theaters in two weeks.

Still, it was an overall good debut for one of Hollywood’s most bankable stars, who as usual put on a full-court press promoting the film in the lead-up to its release. Internationally, look for this one to perform even better, as Johnson’s films tend to gross considerably more overseas. With a budget of $120 million, profitability seems all but assured.

The previous weekend’s leader, Paramount Pictures’ horror A Quiet Place, wasn’t too far behind with $32.97 million in second place. The film’s 34.3 percent second weekend drop was on the milder end for the traditionally front-loaded horror genre.

A Quiet Place has benefitted greatly from strong word-of-mouth, as it has become one of the “must-see” films of the spring and has broken out far beyond the typical genre audience. The film’s total now stands at $100.01 million in just 10 days, with much more to come as it heads into nine-digit territory.

The weekend’s other newcomer, Universal Pictures’ Truth or Dare debuted in third place with $18.67 million, a great result for a film that only cost a reported $3.5 million to make. Two of the top three films were horror on this Friday the 13th weekend. It is yet another feather in the cap for Blumhouse, whose record for minting genre hits remains peerless. 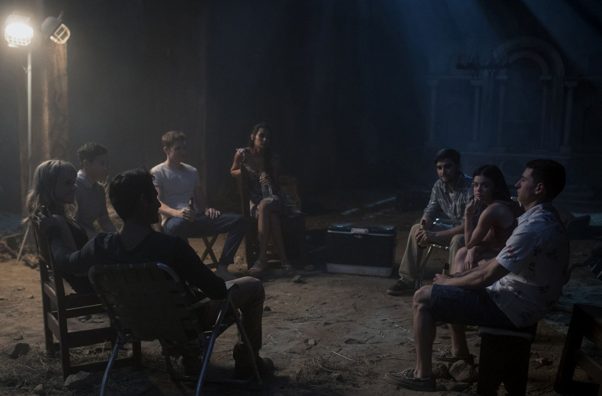 The debut of the teen-driven horror film starring a bevy of freshly-scrubbed TV stars was significantly below last year’s similar Happy Death Day, which debuted to $26 million and ultimately rode its Groundhog Day-as-a-horror-movie premise to $55 million domestically and over $120 million worldwide. Truth or Dare seems primed to finish slightly below that, but that is still a financial win.

In fourth place, Warner Bros.’ Steven Spielberg hit Ready Player One fell 53.2 percent to $11.52 million in its third weekend, bringing its total to $114.92 million after 18 days. At that rate, the sci-fi adaptation may struggle to top the $150 million mark, particularly with Avengers: Infinity War waiting in the wings.

Universal’s Blockers fell two spots to fifth in its second weekend, dropping 47.6 percent to $10.77 million after debuting to a healthy $20.56 million the previous weekend. Although not the giant hit some were predicting after it played to enthusiastic crowds at SXSW, the comedy still has a good $37.40 million after 10 days. Much like Warner Bros./New Line’s Game Night, this should finish as a tidy mid-range success for the studio, which reported a budget of $21 million.

In sixth place, Walt Disney Studios/Marvel Studios’ Black Panther continued to bring in viewers with $5.75 million in its ninth weekend, giving the record-breaking superhero movie a total of $674.23 million domestically. It is now the third highest-grossing movie of all time in North America, behind only Star Wars: The Force Awakens and Avatar. Audiences will get even more T’Challa in this month’s Avengers: Infinity War.

Moving up to seventh place was director Wes Anderson’s Isle of Dogs, which expanded wide last weekend and finished with a so-so $5.48 million. That is okay for the animated film, which was loved by critics even as it suffered its share of backlash over Anderson’s handling of Japanese culture. It is slightly below the director’s previous animated venture Fantastic Mr. Fox, which grossed $6.9 million in its wide expansion in 2009 on its way to $21 million domestically. Isle of Dogs’ total now stands at $18.93 million.

In eighth place, Roadside Attractions’ I Can Only Imagine took in $4.14 million in its fifth weekend for a total of $75.29 million to date. That represents a 46.9 percent fall, the faith-based hit’s biggest drop yet, as it previously never dipped more than 30 percent weekend-to-weekend. Nonetheless, it is now one of the highest-grossing Christian films of all time.

Rounding out the Top 10 were Tyler Perry’s Acrimony, which brought in $3.64 million in ninth for a grand total of $37.83 million domestically, and Entertainment Studios’ Chappaquiddick, which earned $3.06 million its second weekend for a total of $11.04 million in 10th place.