The Disney Studios/Marvel Studios mega-blockbuster Black Panther took first place for the third consecutive weekend with $66.31 million. That is the third-highest third weekend of all time, behind only Star Wars: The Force Awakens and Avatar. When adjusted for inflation, it is the fourth-highest also behind 2002’s Spider-Man. 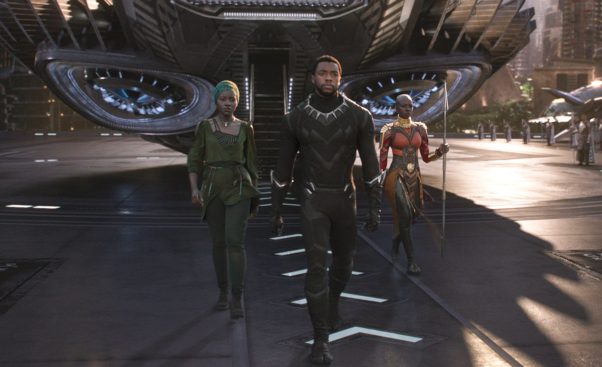 Black Panther held onto first place at the box office the the thrird weekend with $66.31 million. (Photo: Marvel Studios)

Last weekend (March 2-4), Black Panther cracked the 100 highest grossing films of all time when adjusted for inflation, in 86th place just behind 1997’s Twister with a total gross $501.71 million in North America after only 17 days.

The Ryan Coogler-directed movie not only surpassed Avengers: Age of Ultron to become the second highest-grossing Marvel Comics Universe installment of all time behind The Avengers, it became the 10th-highest grossing film of all time in North America, passing the original Star Wars with $460 million including re-releases, Star Wars Episode I – The Phantom Menace with $474 million and Finding Dory with $486 million.

In pure dollars, the film is already the 10th highest grossing film of all time, and is set to pass last year’s Beauty and the Beast with .$504 million sometime this week and will easily top Rogue One with $532 million and The Dark Knight with $534 million by the end of next weekend to land at seventh all-time.

Black Panther fell only 40.6 percent last weekend, an impressive hold as word of mouth continues to drive audiences to theaters. It is the lowest third-weekend drop for a Marvel superhero flick since Guardians of the Galaxy in 2014. The film will be up against fellow Disney newcomer A Wrinkle in Time for the top spot this coming weekend, but don’t rule it out.

Way behind in second place was 20th Century Fox’s spy thriller Red Sparrow with a $16.85 million debut. The Jennifer Lawrence movie came in about in line with expectations.

The $69 million film may have suffered in part from mixed reviews and complex subject matter that made the film a tough sell despite the presence Lawrence’s presence in the lead role. Compared with previous female-fronted action-thrillers, its debut numbers rank far behind 2010’s Salt, which had a $36 million opening, and 2014’s Lucy, which debuted with $43 million, and slightly behind last year’s Atomic Blonde, which opened with $18.2 million and had a budget less than half Red Sparrow’s. If it falls as expected, it will rank as the third box office disappointment in a row for Lawrence after last year’s arthouse horror Mother! and 2016’s big-budget sci-fi Passengers, which inched past $300 million worldwide but barely grossed $100 million stateside.

MGM Studios’ action movie Death Wish came in slightly under expectations with a third place debut of $13.01 million. While not terrible for the $30 million Bruce Willis revenge thriller, the studio’s first self-distributed film since announcing its return to U.S. distribution last year came in below most industry expectations.

Reviews for the Eli Roth-directed film were not good, though it is worth noting that the heavily-male audience was more forgiving, which could bode well for its long-term playability. Death Wish’s relative underperformance could be due in part to an overcrowded first quarter for male-oriented action films, with the genre saturating the marketplace the last several weeks.

In fourth place, Warner Bros. Pictures’ Game Night held well in its second, slipping just 38.8 percent to $10.41 million and a total of $33.24 million to date. The Rachel McAdams-Justin Bateman film is the only adult comedy currently in theaters, which in addition to good word-of-mouth helps explain its solid hold in its second weekend. It will have more competition this coming weekend, when Gringo starring David Oyelowo and Charlize Theron debuts.

In fifth place, Sony Pictures’ Peter Rabbit fell just 21.6 percent to $10.41 million in its fourth weekend, giving it a total of $84.07 million so far. The $50 million movie is the first family-movie hit of the year, sidestepping the fate of underperformers like Paddington 2 and Early Man, both of which struggled to find an audience in North America, although the former was a big hit internationally.

Paramount Pictures’ sci-fi/horror Annihilation fell 49.3 percent to $5.61 million for a total of just $20.59 million in North America so far. Although the $40 million film received rave reviews, mainstream audiences were clearly put off by its unconventional sci-fi storyline and it struggled to gain a foothold. The film is debuting exclusively on Netflix in most markets later this month, following a deal that saw the streaming service take on a portion of the film’s budget for exclusive rights in territories outside North America and China.

Both Sony’s Jumanji: Welcome to the Jungle and 20th Century Fox’s musical The Greatest Showman spent an 11th weekend in the top 10. They become the first films to achieve the uncommon feat since Spider-Man: Homecoming last September.

Jumanji: Welcome to the Jungle fell 21.4 percent to $4.44 million for an eighth place finish with $393.14 million to date domestically. The Greatest Showman slipped 20.8 percent to $2.70 million to finish in ninth place with earnings of $164.64 million so far in North America. The Greatest Showman is unlikely to add a 12th week to its run in the top 10, but the Dwayne Johnson Jumanji could as it inches closer to the $403 million total of 2002’s Spider-Man. When it surpasses that amount, it will become the highest-grossing Sony release of all time in North America.

Rounding out the Top 10, Fifty Shades Freed took in $3.40 million in eighth place for a total of $95.69 million after four weekends. While the YA adaptation Every Day earned $1.55 million for 10th place with $5.25 million total domestically.