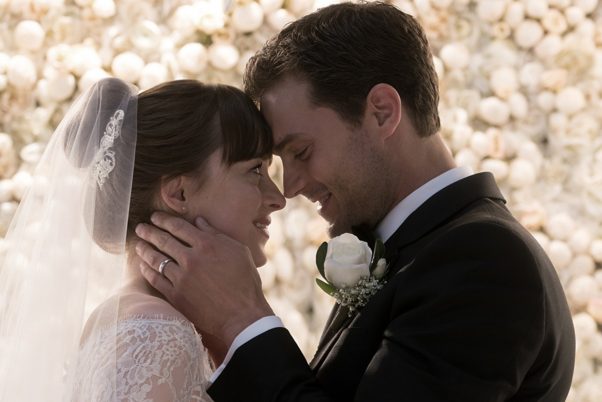 Fifty Shade Freed led the box office last weekend with $38.56 million. It is the last installment in the triology. (Photo: Universal Pictures)

While Fifty Shade Freed’s three-day gross represents the lowest debut of the blockbuster series, this was still a great start for the E.L. James adaptation, which benefitted from a no-holds-barred marketing blitz. It also has the distinction of being the first real “event”-sized franchise film of the year. If it performs the way the last two installments did over the coming weeks, it could easily top out over $100 million domestically.

Second place went to Sony Pictures’ Peter Rabbit, the adaptation of Beatrix Potter’s classic children’s book series that opened to a better-than-expected $25.01 million. That compares favorably with the $18.9 million opening of the first Paddington movie in 2015 as well as this year’s Paddington 2, which debuted to $11 million back in January.

Unlike the critically-beloved Paddington series, Peter Rabbit only got so-so reviews from crities, so it will be interesting to see whether it can demonstrate the kind of solid holds the Paddington movies enjoyed during their runs. Looking ahead at the release calendar, it is relatively smooth sailing, though it will have some competition for family audiences next weekend when Aardman Studios’ stop-motion-animated Early Man opens in theaters.

Warner Bros. Pictures’ action thriller The 15:17 to Paris, directed by Clint Eastwood, opened in third with $12.55 million. That was an okay debut for the film, although far lower than Eastwood’s similarly-themed American Sniper, which brought in a whopping $89.2 million in its wide opening weekend in 2015. That film of course captured the zeitgeist in a way The 15:17 to Paris didn’t, and its terrible critical reviews didn’t help.

Perhaps a fairer comparison would be this year’s Afghanistan War drama 12 Strong, which opened to $15.8 million on about the same number of screens in late January. That film, however, fared considerably better with critics and also benefitted from the commercial pull of Avengers co-star Chris Hemsworth in the lead role.

Sony’s Jumanji: Welcome to the Jungle ended its run at the top, falling three spots to fourth with $10.02 million. Still playing on more than 3,100 screens after eight weeks, the Dwayne Johnson blockbuster slipped a mere 8.3 percent, but keep in mind that all grosses the previous weekend were deflated due to the Super Bowl. It now stands at $365.86 million domestically.

Twentieth Century Fox’s musical The Greatest Showman, posted another small decline, slipping just 16.4 percent to $6.44 million and a total $146.58 million to date. The film is primed to cross the $150 million mark this coming weekend, a huge feat for a movie that took in only $8.8 million during its three-day opening in December. It is a true word-of-mouth hit of the type we don’t see much of anymore and another feather in the cap for Hugh Jackman, who retired his role as Wolverine with last year’s Logan.

Both Jumanji: Welcome to the Jungle and The Greatest Showman both reached an impressive milestone simultaneously with their eighth weekends in the box office top five. They became the first films to do so since last year’s Beauty and the Beast, which opened in March and notched the feat in May.

Supernatural horror film Winchester dropped to seventh with $5.21 million in its second weekend, a drop of 44.0 percent from its $9.31 million debut. The sharp second-weekend decline, which would have been even greater had it not been competing with the Super Bowl the previous weekend, is expected for a horror movie, particularly one that fared so badly with critics. The Lionsgate release earned $17.34 million so far and will no doubt fade quickly.

Rounding out the Top 10 last weekend, The Post finished in eights with $3.63 million and $72.97 million so far, Best Picture contender The Shape of Water earned $3.18 in ninth place with $49.94 million to date and Gerard Butler action film Den of Thieves finished with $3.00 million in 10th place, bringing its total gross to $41.07 million.

The top 10 films last weekend earned $113.82 million. That is 73.1 percent above the previous weekend’s $65.77 million total. However, it is 33.5 percent below the $171.09 million on the same weekend last year, when The Lego Batman Movie led with $53.00 million. Year-to-date, the box office stands at $1.24 billion, the first time this year is stands below last year, after slipping behind last Thursday for the first time.