Twentieth Century Fox’s action sequel Maze Runner: The Death Cure debuted below the franchise’s two previous installments, but still took first place at the box office last weekend (Jan. 26-28) with $24.17 million. That was enough to knock off Sony Pictures’ Jumanji: Welcome to the Jungle, which had led the previous three weekends and fell to second place with $16.14 million. Meanwhile, Entertainment Studios’ Western Hostiles moved up to third place with $10.11 million in its first weekend of wide release. 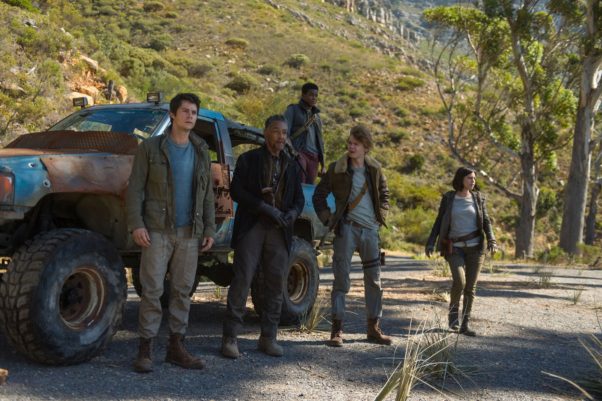 While the third installment of the hit young adult series did reasonably well on its opening frame, Maze Runner: The Death Cure’s debut was significantly lower than that of the two previous installments, The Maze Runner with $32.5 million and Maze Runner: The Scorch Trails with $30.3 million. But, the franchise has performed better overseas, so if it follows the same pattern as the two previous films in the series, both of which made over twice as much internationally, it will likely make up quite a bit of ground in foreign territories.

After three weeks at the top, Jumanji: Welcome to the Jungle slipped to second place in its sixth weekend of release, adding $16.14 million to its coffers for a total of $337.80 million. It continued to demonstrate incredible legs, falling just 17.3 percent from the previous weekend. It has been a remarkable run for the belated sequel, which has more than surpassed expectations and now sits at fifth on the list of 2017 releases, having passed It with $327 million and Spider-Man: Homecoming with $334 million. It is also the third highest-grossing Sony title of all time, with Spider-Man 2 in second with $373 million and Spider-Man with $403 million both seemingly within reach. Of course, those films were released in 2004 and 2002, respectively, when ticket prices were considerably lower.

In third place, the Scott Cooper western Hostiles starring Christian Bale did reasonably well in its wide debut, taking in $10.11 million for a total of $11.96 million thus far. It played for several weeks in limited release before expanding to over 2,800 theaters on Friday. The film’s reported production budget is around $50 million, meaning it still has a way to go before it turns a profit.

Fourth place went to The Greatest Showman, which made $9.55 million in its sixth week of release after earning a Best Original Song Oscar nomination for This Is Me. The Hugh Jackman musical has grossed $126.53 million since opening just before Christmas and has held up remarkably well. Keep in mind that the film opened to just $8.8 million, which represents just seven percent of its total gross. That number demonstrates the word-of-mouth power that has made it the biggest surprise hit of the season.

In fifth place, 20th Century Fox’s The Post, which earned nominations for Best Picture and Best Actress for Meryl Streep. It dipped just 22.3% to $9.11 million. The Steven Spielberg film about the release of the Pentagon Papers has earned $58.79 million to date and should continue to do well heading towards the Academy Awards.

Finishing neck-and-neck in sixth and seventh were 12 Strong and Den of Thieves, two male-oriented action movies that have been performing similarly since opening opposite one another the previous weekend. 12 Strong took in $8.69 million while Den of Thieves earned $8.63 million, bringing their grosses so far to $29.81 million and $28.78 million, respectively. It should be noted that Den of Thieves is playing in about 600 fewer locations, giving it a more robust per-theater average than 12 Strong.

The Shape of Water added 1,000 screens and earned $5.92 million for a total of $37.90 million and eighth place. With a whopping 13 Oscar nominations including Best Picture, the Guillermo Del Toro fantasy-romance is looking at several weeks of boosted attendance in the lead-up to the Academy Awards show.

In ninth place, Paddington 2 held well with $5.67 million, down just 29.2 percent from the previous weekend, giving it $32.12 million after three weeks. While it started much slower than its predecessor, it has demonstrated sturdier legs, and it is a winner when you look at the global picture as it brought in more than $150 million internationally on a reported $50 million budget.

Rounding out the Top 10 is Viva Pictures Distribution’s Padmaavat with $4.43 million. The controversial Bollywood movie about Queen Padmavati of Chittor, a prosperous kingdom northwest of India, who kills herself rather than be taken by Allaudin Khilji, the tyrant sultan of Hindustan, following a bloody battle. It has been barred from Malaysia for “sensitivities to Islam.”