Jumanji: Welcome to the Jungle Moves to Top

It took three weekends, but Sony Pictures’ Jumanji: Welcome to the Jungle finally took the top spot at the box office last weekend (Jan. 5-7) with $37.23 million. 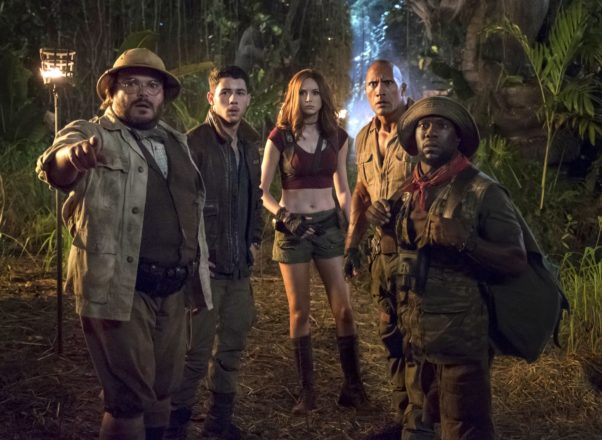 Jumanji: Welcome to the Jungle finally made it to first place last weekend taking in $37.23 million. (Photo: Sony Pictures)

The was only a 25.6 percent drop from its three-day total the previous weekend, a good hold for the action-comedy sequel. Its hold suggests word of mouth is strong for the follow-up. Its total gross stands at $245.61 million after 17 days, far outpacing the original Jumanji even when adjusting for inflation. The 1995 film grossed $100.48 million domestically and another $162.32 million internationally.

It is the first time a film climbed to the top spot, rather than premiering there in its wide release debut, since The Revenant in January 2016. The Revenant had fallen behind Star Wars: The Force Awakens and Ride Along 2 during its first two weekends in wide release. It now ranks as the ninth highest grossing film domestically, passing The Fate of the Furious with $225.76 million, Logan with $226.28 million and Justice League, currently with $227.03 million. With this momentum, it could easily finish in the Top 5 by the end of its run, knocking out current fifth-lace Spider-Man: Homecoming, which grossed $334.20 million.

Jumanji: Welcome to the Jungle spent its first two weekends behind Disney’s Star Wars: The Last Jedi, which fell to third place with $23.73 million.

The surprise second place finisher was horror sequel Insidious: The Last Key, the latest release from genre power player Blumhouse Productions that far exceeded expectations with $29.58 million its opening weekend. It is an impressive showing for the fourth entry in the long-running franchise, particularly given that analysts were generally predicting a sub-$20 million gross for the fright flick going into the weekend. But it one was typically frontloaded, bringing in $12.72 million on Friday, including $2 million in Thursday night previews.

While The Last Key wasn’t able to reach the heights of franchise leader Insidious: Chapter 2, which opened to $40.27 million in September 2013 on its way to a final domestic gross of $83.59 million, it improved upon the most recent installment, Insidious: Chapter 3, which took in $22.69 million during its opening weekend in June 2015. Last weekend’s result indicates there is a bit more interest left in the series than previously thought. It is another feather in the cap for Blumhouse, which continues its hot streak after a stellar 2017 that saw major successes like Get Out, Split and Happy Death Day.

Fourth place went to 20th Century Fox’s The Greatest Showman, which despite mixed-to-poor reviews has benefitted from strong word-of-mouth and dropped just 11.3 percent from its three-day total last weekend. Earning $13.77 million last weekend, the Hugh Jackman musical’s domestic total stands at $76.88 million, with repeat business ensuring it will top $100 million domestically. The film’s gross has undoubtedly been helped by its hit soundtrack, which is predicted to hit No. 1 on the Billboard album chart next week.

Speaking of musicals, Pitch Perfect 3 took in another $10.30 million in its third weekend, good for fifth place and a grand total of $85.06 million so far. In sixth place, 20th Century Fox’s quiet but steady animated Ferdinand took in $7.70 million for a total of $70.47 million, while STX’s awards-season hopeful Molly’s Game expanded to 1,608 screens and brought in $6.86 million, enough to give it $14.07 million since its limited release on Christmas Day.

Also expanding nationwide this weekend was eighth place Darkest Hour, which rode the Oscar buzz for Gary Oldman’s performance as Winston Churchill to $6.05 million on 1,733 screens, giving it $28.09 million so far.

Rounding out the Top 10 were Disney-Pixar’s animated hit Coco with $5.38 million and $191.93 million so far and Sony’s All the Money in the World with just $3.57 million in its third weekend of release and $20.15 million since opening on Christmas Day. With an estimated production budget of $50 million and millions of dollars spent on reshoots after Christopher Plummer replaced controversy-plagued Kevin Spacey in the role of J. Paul Getty, it is clearly not the result the studio was hoping for.