Star Wars: The Last Jedi Soars to No. 1

As expected, Star Wars: The Last Jedi soared to the top of the box office charts last weekend (Dec. 15-17) with a $220.61 million opening including Thursday night previews. 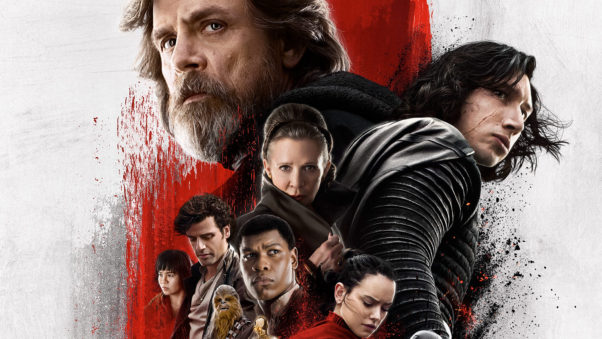 The Force was with Star Wars: The Last Jedi, which debuted in first place last weekend with $220.61 million. (Photo: Lucasfilm)

The Force was strong with the Rian Johnson-directed sequel from Walt Disney Studios/Lucasfilm, which captured the second-highest opening weekend of all time behind only 2015 predecessor Star Wars: The Force Awakens, which it trailed by 11.2 percent. Adjusted for inflation, it was the fourth-highest opening ever, behind The Force Awakens, 2012’s The Avengers and 2015’s Jurassic World. The film beat most expectations, which were around $200 million.

The Last Jedi earned more in its opening weekend than this season’s other expected-biggest blockbuster Justice League has in total so far, after five weekends.

The film launched with the ninth-highest overseas opening ever with $230.8 million without the help of China, where the film opens Jan. 5. The Last Jedi opened 17.8 percent behind the overseas opening for The Force Awakens.

Add them together, and Disney has the fifth-largest global opening of all time at $450.8 million. It trailed only The Fate of the Furious, The Force Awakens, Jurassic World and Harry Potter and the Deathly Hallows Part 2. And keep in mind that is without China.

With the weekend, Disney once again became the highest-grossing Hollywood studio of the year domestically. Its grosses this year stand at $2.07 billion, a bit ahead of Warner Bros. Pictures with $2.01 billion. Disney led through the summer, but Warner Bros. took the lead in September on the strength of hits such as It. But, Disney once again took the annual lead just under the buzzer.

The Force Awakens earned a 3.8 multiplier — the ratio of total gross to opening weekend which reflects positive word-of-mouth versus front-loaded hype. If The Last Jedi can match that, it would earn $831.2 million. However, audience reception was much more divided than for The Force Awakens, earning a 55 percent audience approval score on Rotten Tomatoes compared with 88 percent for its predecessor.

Finishing in second was 20th Century Fox’s release of Blue Sky’s animated comedy Ferdinand, which took in just $13.40 million in its debut weekend. While it did reasonably well with critics, it was no match for The Last Jedi‘s appeal.

Ferdinand‘s debut is about in line with 2015’s Alvin and the Chipmunks: The Road Chip, another Fox family offering that opened to $14.2 million against The Force Awakens. Luckily, The Road Chip held viewers through the holidays and finished with $85.8 million domestically. If Ferdinand follows in the coming weeks, it should finish in comparable territory and hopefully make up some ground overseas.

Part of Ferdinand‘s modest performance last weekend could have been due to the staying power of Disney-Pixar’s similarly family-friendly Coco, which fell to third with $9.95 million from its three-weekend perch at the top of the chart. That represents a drop of only 46.1 percent from the previous weekend despite The Last Jedi‘s overwhelming presence. The animated hit now boasts a total of $150.74 million after four weeks, with more left as students across the country go on holiday break.

In fourth place, Lionsgate’s Wonder added to its impressive earnings with another $5.23 million. That gives it a total of $109.08 million after five weeks, making it one of the biggest hits of the holiday season and a successful feat of counter programming against heavies like Justice League and Coco.

Speaking of Justice League, the Warner Bros.-DC Comics superhero title fell to fifth place with $4.31 million, finishing beneath Wonder on the weekend chart for the first time. This is despite the fact that the DC Extended Universe tentpole grossed a whopping $66 million more than the latter when the two opened against each other in mid-November. Its total now stands at $219.60 million.

Sixth place went to Daddy’s Home 2, which took in another $3.81 million last weekend, bringing it ever closer to the $100 million mark with a domestic total of $96.59 million. While the Will Ferrell-Mark Wahlberg sequel qualifies as a modest success against its reported $69 million budget, it should finish with far less than the original’s $150.3 million total when all is said and done. In seventh place, Marvel’s Thor: Ragnarok added $3.13 million, bringing its domestic total to $306.53 million after seven weeks.

In eighth place, A24’s The Disaster Artist added over 200 theaters, but dropped 57.3 percent from the previous weekend, grossing $2.72 million for a total of $13.01 million so far. In ninth, 20th Century Fox’s hit mystery-thriller Murder on the Orient Express earned another $2.53 million for a total of $97.31 million, while A24’s acclaimed comedy-drama Lady Bird grossed $2.10 million to finish in 10th place with a very good $25.87 million total after five weeks.

The top 10 films earned $267.79 million last weekend, 279.1 percent ahead of the previous weekend’s $70.64 million. It was also 31.6 percent ahead of the same weekend last year, when Rogue One: A Star Wars Story led for the first weekend with $155.08 million. Year-to-date, the box office is down 3.0 percent from last year – a slight uptick from the low point of 6.3 percent behind in early September, and the closest it has come to 2016 since early August.