Disney-Pixar’s Coco finished on top over the Thanksgiving weekend, bringing in $50.80 million its first weekend. Counting Wednesday and Thursday of the Thanksgiving holiday, the animated offering posted a five-day opening of $72.91 million. 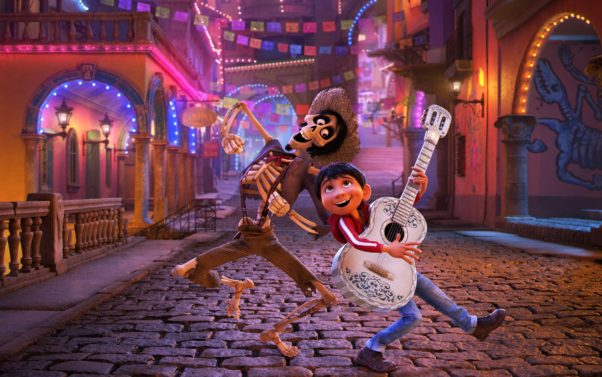 That fell short of the top 10 Thanksgiving grosses of all time, ranking at number 11.
It also fell a bit short of last year’s Moana, which debuted with $56.63 million over the three-day weekend and $81.1 million over the five-day holiday last Thanksgiving. However, it did start 31 percent above Pixar’s last Thanksgiving release, 2015’s The Good Dinosaur and also earned more through its first five days than Pixar’s summer offering Cars 3 earned through its first six. In the record books, Coco ranks as the fourth largest Thanksgiving debut ever, behind only Frozen with $94 million, Moana and Toy Story 3 with $80 million.

Demographically, Coco‘s audience last weekend was 53 percent female, 73 percent families and 36 percent under the age of 12.

The previous leader, Warner Bros. Pictures’ Justice League came in second place, but dropped dramatically falling 56.2 percent while no other film in the top 10 fell more than 30 percent.
The film took in $41.09 million for the three-day weekend and $60.00 million for the five-day. On the plus side, the film did exhibit a better second-weekend hold than other DC Extended Universe films Batman v. Superman: Dawn of Justice which fell 69 percent or Suicide Squad which fell 67 percent. Wonder Woman remains the champ in that department, with a drop of just 43% in its second weekend. While much was made of the Justice League’s sub-$100 million debut the previous weekend, the hold was more solid than expected.

In third place, Lionsgate’s Wonder continued to impress, grossing $22.67 million over three days and $32.62 million over five days, giving it a total of $69.81 million in its first 10 days. That represents a drop of just 17.7 percent from the previous weekend’s three-day total.

Further down the chart, 20th Century Fox’s Murder on the Orient Express took in $13.17 for the three-day weekend and $18.73 million over the five-day period. The $55 million thriller has been a hit with adult audiences this season, and should finish north of $100 million domestically when all is said and done. So far it has earned $74.36 million. Sony Pictures’ faith-based animated comedy The Star grossed another $6.93 million in its second weekend and $9.5 million over the five-day frame, performing strongly enough with faith-based audiences to register despite Coco’s presence in theaters.

The top 10 films earned $178.49 million over the three-day weekend, 7.4 percent below the previous weekend’s $192.82 million. However, it was 4.6 percent ahead of the same weekend last year, when Moana debuted in first place with $56.63 million. Year-to-date, the box office is down 4.1 percent from last year, which sounds bad but actually continues a noticeable improvement the past few weeks. In fact, following this year’s historically low-performing summer, -4.1 percent is actually the best the year-to-date box office comparison has been since -4.3 percent in early August.