When is it appropriate — if ever — to give two anniversary gifts for the price of one?

That’s a loaded question. Let us rephrase: When does it make sense for committed couples to invest in joint anniversary gifts?

Sounds much better — but it is still no slam dunk that your partner will come onboard. No problem. Follow these six tips to convince your skeptical spouse or long-term beau that your next anniversary is the perfect opportunity to begin a tradition of joint anniversary gift-giving. 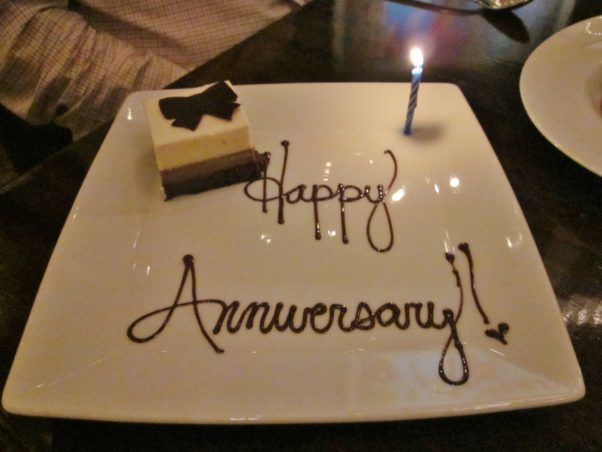 Every anniversary year, at least up until the 30th, has its own annual theme. Joint anniversary gifts are more special — and less cheap-feeling — when they stick to a theme that both partners can agree on.

Got a 10th anniversary coming up? It is diamond jewelry time. Fifteenth? Time for a little watch shopping. The big 3-5? Get anything you want, as long as it is jade. The even bigger 5-0? Go for the gold. Use this list for a complete cheat sheet on anniversary theme years.

Practical gifts have never been more in fashion, but that is not to say they are appropriate for every occasion. In fact, a joint anniversary is your best opportunity to buck the trend and invest in a collectible anniversary gift — a special something that you don’t have to use every day. Think fine china, not shatterproof plastic plates.

3. Learn the art of compromise

If you have made it this far with your partner, you probably don’t need a refresher on the finer points of compromise. But the run-up to your anniversary is as good a time as any for a quick cram session.

The secret to joint anniversary compromise is utility. Not in the “is this gift practical” sense — see above — but in the “can we both find use for this gift” sense. To stick with the fine china metaphor: You both need to eat, right?

No matter how long you have been together, you and your partner no doubt share plenty of common memories.

Delve back into your past to find a suitable experience, preferably one with direct import for your relationship. Maybe you proposed to your partner at a Nats game. Or decided for sure that you would spend the rest of your life together by the wayside on the C&O Canal. Or maybe your first date restaurant is still around. Or there is some obscure piece of cultural errata that you have both always wanted to own, something with real meaning to your friendship.

The details aren’t important. What does matter is honoring a memory that matters to you both.

If nostalgia isn’t your thing, look ahead. It is never too late to make a new memory, and experiential anniversary gifts have the added advantage of not taking up extra room in your hall closet or living room mantle.

Making a memory can be as simple (and cheap) as a picnic in the park and as elaborate as an extended vacation on another continent. You are limited only by your imagination. And maybe your PTO account.

6. Go back to your roots

It is not quite the same as honoring a shared memory, but it will sure make your parents happy. And there is nothing more personal. Whether it is a weekend trip to your family’s ancestral home or a gift of jewelry or housewares once owned by a long-lost relative, a rootsy anniversary gift honors tradition and keeps the flame alive for another generation. Who knows, your kids might one day exchange the same heirlooms with their life partners.

What is your idea of a perfect joint anniversary gift?