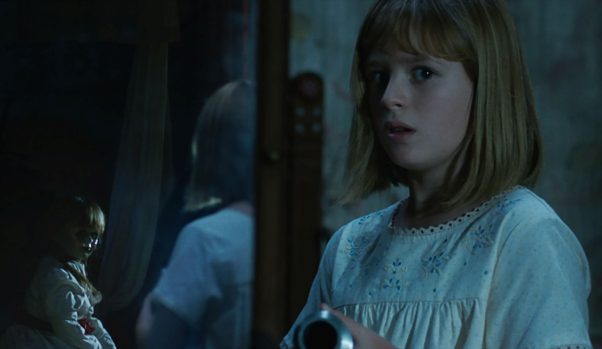 Annabelle: Creation opened in first place last weekend with $35.01 million, but was the lowest of the four movies in the Conjuring/Annabelle series. (Photo: Warner Bros. Pictures)

The fourth installment in the Conjuring/Annabelle horror franchise, Annabelle: Creation had the widest release by number of theaters, yet posted the lowest opening weekend among the four films. Although not by much — the previous three films had all opened between $37 million and $41 million, and $35 million falls in that general range. Plus, the film opened in August, usually a lower-grossing month than July, October and June when the three previous installments were released, respectively.

Will it beat the final total of the original Annabelle’s $84.2 million? That film opened in early October, so its subsequent weeks had the benefit of imminent Halloween anticipation, a timing that Annabelle: Creation can’t match.

The Nut Job 2: Nutty By Nature, with the voices of Will Arnett, Jackie Chan and Katherine Heigl, debuted 54 percent below the opening of the original The Nut Job, a film that had the added disadvantage of opening in January. The sequel may have been hurt by poor word of mouth.

Lionsgate’s drama The Glass Castle starring Brie Larson, Woody Harrelson and Naomi Watts started in ninth place with $4.68 million. That was about in line with pre-release expectations, which were lowered in part by the film’s small theater count of only 1,461 theaters nationwide. Based on the bestselling 2005 novel by Jeanette Walls, which spent 261 weeks on the New York Times bestseller list, the film adaptation was unable to capitalize on the popularity of the book.

War drama Dunkirk held onto second with a 36.5 percent drop. Coming off its 35.6 percent drop the prior weekend, the film is holding very well and might possibly remain in the top 10 through September. With $153.19 million so far, it may surpass $200 million, something few would have expected.