It Is a Perfect Weekend to Get Out and Enjoy

It is going to be a partly cloudy weekend in the DMV with highs in the low- to mid-80s and no chance of rain in the forecast. It is looking like a good weekend to go out and have fun. Whether you want to attend the world’s largest crab feast, play video games or take in sports, there is something for everyone this weekend.

Beginning Saturday, Metro will close the Suitland and Branch Avenue stations on the Greenline for a major rebuilding project until Aug. 20. During that time, buses will replace trains between Naylor Road and Branch Avenue. Also, Greenline trains will single track between Georgia Avenue-Petworth and Fort Totten from 10 p.m.-closing all weekend. Trains will run on normal schedules on the open part of the line. On the Red Line, the Medical Center and Bethesda stations will be closed with shuttle buses replacing trains between Friendship Heights and Grosvenor. Trains will run on a regular schedule between Shady Grove and Grosvenor and Friendship Heights and Glenmont with extra trains between 9 a.m.-9 p.m. between Farragut North and Silver Spring. Blue and Silver Line trains single track between Stadium-Armory and Addison Road, but operate on normal weekend schedules. Yellow and Orange Line trains are also on regular weekend schedules. 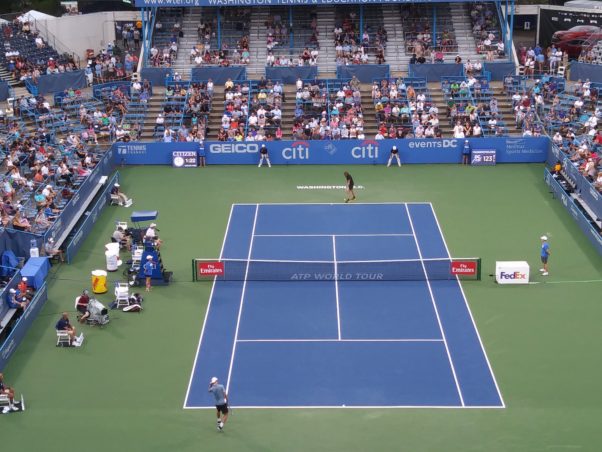 The Citi Open quarterfinals, semifinals and finals are this weekend at the Rock Creek Park Tennis Center. (Photo: Citi Open/Twitter)

Rock Creek Park Tennis Center plays host to the Citi Open, a D.C. summer sporting tradition now in its 48th year. International tennis stars will battle in front of thousands of fans during the week-long tournament. This weekend features the quarterfinals on Friday, the semifinals on Saturday and the finals on Sunday. Make sure to check the tournament’s website for event, ticket and lineup updates. You can also take advantage of ticket discounts for certain sessions. 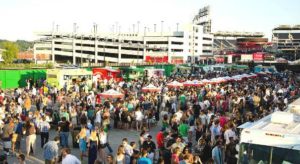 Truckeroo, the monthly food festival, brings local food trucks to The Bullpen in front of Nationals Park to dole out everything from cookies and milk to Vietnamese sandwiches. About two dozen wheeled food sellers show up, and there are picnic tables and shade to keep things cool. Among this month’s participants are Due South, Surfside, Neatmeat, Puddin’, Halal Grill, People’s Bao, Pittsburgh Rick’s, South Meets East and The Orange Cow. There will also be games, cold beverages and live music to create the full-on summer experience. 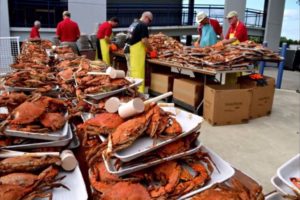 The Annapolis Rotary Club Crab Feast is the largest crab feast in the state of Maryland. The all-you-can-eat crab feast requires 350 bushels of No. 1 male crabs, 3,400 ears of corn, 150 pounds of beef barbecue and 100 gallons of crab soup, to say nothing of the rivers of beer and soda. It’s so big that it requires the Naval Academy’s football stadium to hold all 2,500 attendees. All proceeds from the Annapolis Rotary Club’s 72nd annual all-you-can-eat-and-drink crab feast are donated to local charities. 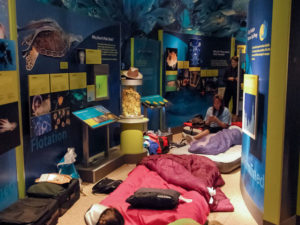 The National Museum of Natural History hosts two Smithsonian Sleepovers this month on Aug. 4 and 18. These ever-popular events allow kids to spend a night immersed in adventure inside a Smithsonian museum. This go-round, kids can solve puzzles and play games involving the Natural History Museum’s exhibits, as well as participate in craft projects, watch an IMAX film and sleep beneath a 50-foot whale. Snacks and a light breakfast will also be served. Ages 8-12 are permitted, and there must be at least one adult present for every three children in any group that registers. No siblings younger than 8 are allowed, and no adults are allowed without children. 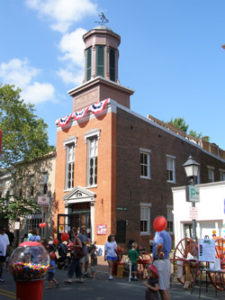 Visit the historic Friendship Firehouse for its annual festival on Saturday. (Photo: City of Alexandria)

Heed the siren call of the annual Friendship Firehouse Festival. You can visit the historic station built in 1855 and check out firefighting activities, cool vehicles and some olden-days equipment that will make you want very, very grateful you live in the modern age of firefighting. For example, ther’s the suction pumper fire engine, which was pulled by hand. You also get a free fire hat!

A 25-foot model of the USS Missouri made from Legos will be on display at BrickFest. (Photo: BrickFest)

From movies to architectural models, Lego is bigger than ever. The company’s popularity is on display at BrickFair, which fills 130,000 square feet with everything Lego: a 25-foot-long model of the battleship USS Missouri; the giant Rube Goldberg-esque Great Ball Contraption; even a Lego mini-golf course. And yes, there are plenty of vendors selling rare and original sets, figurines and accessories for Lego fans of all ages.

Play video games. Inside of a state-of-the-art museum. For free. Sounds awesome to us! SAAM Arcade will feature roughly 150 titles from developers, letting you and yours sample the coolest new games. You can also play classic arcade games like Asteroids, Pac-Man, Tron, Arkanoid Donkey Kong and more, as well as show of your pinball skills. There will also be game building workshops and a Boys and Girls Club Youth eSports League Championship on the museum’s third floor for those who love competition. You can also expect live music performances by Triforce Quartet and Bit Brigade both days.

Over 18 years, the MidCity Dog Days sidewalk festival has expanded from a sidewalk sale along a few compact blocks of 14th Street NW to something much larger: Participants now stretch along 14th Street from N Street to Florida Avenue, and along U Street from Seventh to 17th streets. Retail is still the heart of the day: Browse for discounts at dozens of stores including Miss Pixie’s Furnishings & Whatnot, Lettie Gooch, Flowers on 14th, Som Records and Salt and Sundry and stop for refreshments at Bar Pilar, Glen’s Garden Market or Nellie’s, which is extending happy hour all day.

Aug. 5 and 6 during operating hours at businesses along 14th and U Streets NW. Admission is FREE! See the website for a map and list of participating businesses. 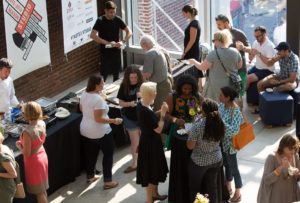 Taste of Studio is Studio Theatre’s annual open house and offers much for theater lovers — previews of the current production Wig Out!, a symposium with playwright and director Aaron Posner, acting conservatory workshops for amateurs, even a flea market of former Studio props and costumes. But it is also a community arts festival, with art installations, performances by local choruses and gospel groups, and a beer garden and mini-food festival with samples from more than 30 local restaurants Bub & Pop’s, Declaration, Haikan, Birch and Barley and more.

George Lopez comes to the Kennedy Center for two shows on Saturday night that will be taped for an upcoming HBO special. (Photo: Kennedy Center)

One of the great stand-up comedy success stories, George Lopez has achieved notoriety in television (both in primetime and late-night), film and through acclaimed specials. In fact, you can experience Lopez’s hilarious new routine as he films it for a new HBO special. Lopez’s tales from his Mexican-American background and litany of show biz stories are sure to leave you laughing. Note: Cellphones, smart watches, cameras and recording devices will not be permitted inside the auditorium. 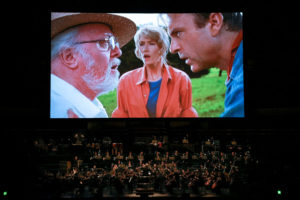 One of cinema’s all-time thrill rides, Jurassic Park, can be experienced like never before at Wolf Trap this weekend. Steven Spielberg’s sci-fi classic concerns a wildlife park with cloned dinosaurs that goes horribly awry, with star turns from Sam Neil, Laura Dern and Jeff Goldblum. The unforgettable score composed by John Williams will be performed live by the National Symphony Orchestra as the film plays, led by conductor Emil de Cou. There will be a free pre-performance discussion with the Smithsonian National Museum of Natural History’s dinosaur curator at 7:30 p.m. on the Old Farmhouse Lawn with hands-on fossil activities. 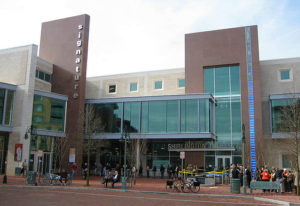 Signature Theatre is kicking of its 2017-18 season with a day reserved for 8 1/2 hours of pure pandemonium in a good way. Activities include free performances – singalongs, dueling guitars, choruses and the like – every 15 minutes, all sorts of dance classes and a huge outdoor party with free popcorn, snowcones and water, a cornhole tournament, basketball, temporary tattoos, skee ball and balloon twister. All that in addition to special discounts on tickets for Signatures upcoming productions.

Aug. 6 from noon-8:30 p.m. at Signature Theatre, 4200 Campbell Ave., Arlington. Admission is FREE! Tickets for free performances will be distributed one hour prior to showtimes. 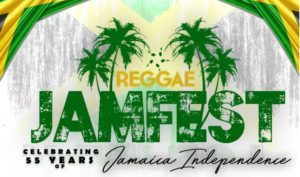 Jamaican-born reggae singer Monsoon and the S.T.O.R.M. headline the Reggae Jamfest, a tribute to 55 years of Jamaica’s independence, along with Ras Slick and Dutty Bus Crew. The party at the Seafarers Yacht Club along the Anacostia — one of America’s oldest black yacht clubs — also features DJs Super Slice and Ablaze, and food and drinks catered by Baltimore’s Island Quizine. 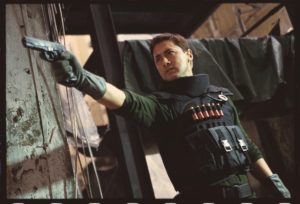 Beast Cops will play as part of the Made in Hong Kong Film Festival on Sunday at the National Museum of American History.
(Photo: Smithsonian)

The final weekend of the Freer/Sackler Gallery’s Made in Hong Kong Film Festival looks at movies made after the island was transferred from Great Britain to China in 1997, and includes two certified classics: Beast Cops, with Anthony Wong playing a corrupt cop fighting gang violence from 1-3 p.m., and Made in Hong Kong, about alienated teenagers mixed up with gangsters from 3:30-5:30 p.m.

Aug. 6 from 1-5:30 p.m. at the Warner Bros. Theatre in the National Museum of American History, 14th Street and Constitution Avenue. Admission is FREE!