War for the Planet of the Apes Climbs to Top

Audiences went ape last weekend (July 14-16), bringing 20th Century Fox’s War for the Planet of the Apes to a first place debut with $56.26 million. A neck-and-neck race was predicted for the top spot between War and last weekend’s leader Spider-Man: Homecoming, but the latter fell further than expected to $44.21 million, giving War a decent lead. 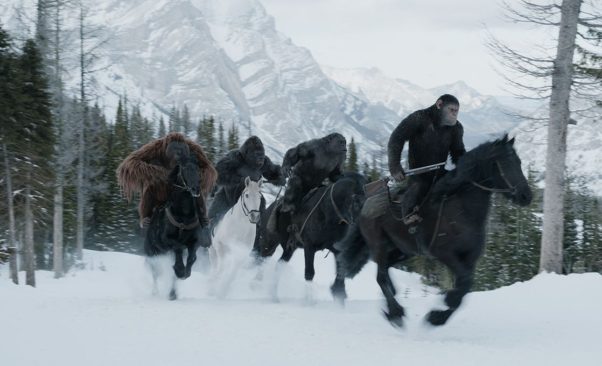 War for the Plaent of the Apes finished in first place last weekend with $56.26 million. (Photo: 20th Century Fox)

Still, War should be considered a decent if not overwhelming success for 20th Century Fox, which had earned the top gross in only one of the previous 15 weekends. The film was boosted by its great word of mouth.

Sony Pictures’ Spider-Man: Homecoming dropped farther than expected in its second weekend, falling 62.2 percent $44.21 million. That is a noticeably steeper second-weekend drop than other superhero films this year: 55.5 percent for Guardians of the Galaxy Vol. 2, 43.3 percent for Wonder Woman and 56.9 percent for Logan.

With a “healthy” wide debut in fifth place was The Big Sick from Lionsgate and Amazon Studios, making $7.53 million. Expanding into wide release on its third weekend after two in limited release, the romantic comedy-drama starring Kumail Nanjiani and Emily Gordon has now earned $15.97 million.

With a 97 percent rating on Rotten Tomatoes, the film could be the first release of the year to earn possible Best Picture buzz, albeit as a dark-horse candidate. That counter-programming likely attracted some adult audiences who otherwise wouldn’t be as interested in any other movies currently playing during the summer blockbuster season.

Broad Green Pictures’ Wish Upon earned a seventh place debut of $5.47 million. The low-budget fantasy horror thriller wasn’t expected to crack the top five, and its opening was about in line with the other three wide-release openings from Broad Green Pictures since the studio began in 2015.

Elsewhere at the box office, Universal Pictures’ Despicable Me 3 took third place with a 42.3 percent drop to $19.36 million. It is now pacing 28.3 percent and 31.8 percent behind Minions and Despicable Me 2 through the same period. Sony and TriStar Pictures’ Baby Driver took fourth place, slipping a respectable 33.0 percent to $8.71 million.