Despicable Me 3 Wins in Theaters

The most successful animated franchise since Shrek continued last weekend, as Despicable Me 3’s yellow minions saw green with $72.41 million. In the process, the film broke the record held since 2010 for highest theater count. Among other new movies, Baby Driver beat most expectations, while The House opened lower than most expectations. 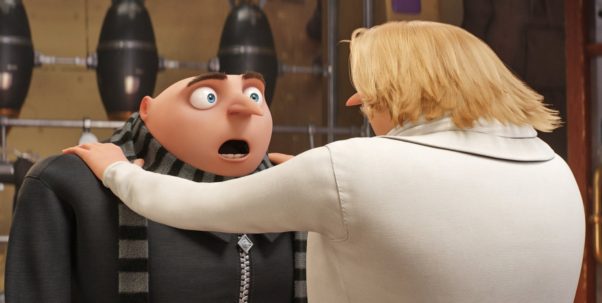 Despicable Me 3 finished in first place over the weekend with $72.41 million. (Photo: Universal Pictures)

Universal Pictures’ animated Despicable Me 3, starring the voices of Steve Carell and Kristen Wiig, boasts the highest-grossing animated weekend since The Secret Life of Pets last summer. But Universal could be a little happier, since this installment is a financial downturn for the franchise, starting 9.7 percent behind Despicable Me 2 and a sharper 38.4 percent behind spinoff Minions. However, that comparison might be slightly unfair because this year’s extended Independence Day weekend means much of the film’s audience will attend on Monday and Tuesday, rather than just Friday through Sunday.

After adding in Monday and Tuesday’s grosses, Despicable Me 3’s “full weekend” grosses could match or exceed Despicable Me 2. Still, there is no chance it will match the opening of Minions, even with two “extra” days in its opening weekend.

Playing at 4,529 theaters, Despicable Me 3 also set a new record for most theaters at which a single film has simultaneously shown. The former seven-year record of 4,468 theaters was set in summer 2010 by Eclipse, the third installment in the Twilight series. Not only was Despicable Me 3 expected to be a cash cow during an extended weekend anyway while previous installment Minions had opened in a huge 4,311 theaters two years ago, but several other releases from the past month have financially underperformed and thus allowed more theater space for Despicable Me 3 than might have been expected a month ago. The Mummy left 1,220 theaters last weekend, Cars 3 left 680, Captain Underpants left 876 and Pirates of the Caribbean: Dead Men Tell No Tales left 779.

But theater count is not the same thing as screen count, since a film can play on multiple screens at an individual location or multiplex. While Despicable Me 3’s screen count isn’t yet known, it is almost certain that it didn’t overtake Star Wars: The Force Awakens with an estimated 14,400 screens.

Sony/TriStar’s action thriller Baby Driver earned $21.0 million and second place. That ranking became more likely as tracking picked up pre-release, but was considered highly unlikely when the film was initially greenlit for an Independence Day weekend release against seemingly-stiff competition and with the unproven Ansel Elgort in the title role. As recently as Thursday, Sony’s own projections were for a mid-teens opening over the five-day.

Co-starring Kevin Spacey and Jamie Foxx, the film opened early on Wednesday of last week and was the highest grosser of both Wednesday and Thursday. Though those two days diminished the opening weekend somewhat, the film nonetheless rode its wave of fantastic reviews and word of mouth.

With an opening comparable to other recent $100+ million hits such as Now You See Me and Kingsman: The Secret Service, in combination with its great word of mouth and comparatively few adult offerings this summer until Dunkirk in late July, look for this to continue well in the weeks ahead.

Warner Bros. Pictures’ R-rated comedy The House had a shaky foundation, as the house collapsed with a $8.73 million start in sixth place. Despite the star power of Will Ferrell and Amy Poehler, the film was unable to overcome negative word of mouth.

This marks the worst wide opening of Ferrell’s career since his leading man status began in 2003. It also continues this summer’s poor showings for R-rated comedies such as Rough Night and Snatched. The House started slightly higher than some other recent R-rated comedies like Keeping Up with the Joneses and Rough Night, though that isn’t saying much.

Elsewhere at the box office, the previous weekend’s leader, Transformers: The Last Knight took third place with $17.0 million, Wonder Woman continued to experience the mildest declines of any superhero film in recent memory with a mere 36.9 percent drop to $15.7 million and fourth place, The Beguiled started decently in limited release with $3.16 million in eighth place and The Big Sick started fantastically in platform release with $1.54 million in 12th place.