The National Mall Is a Circus This Weekend

Start the Fourth of July festivities a little early with a waterfront beer and wine festival, a JFK centennial celebration at the National Museum of American History and celebrate the circus on the National Mall. 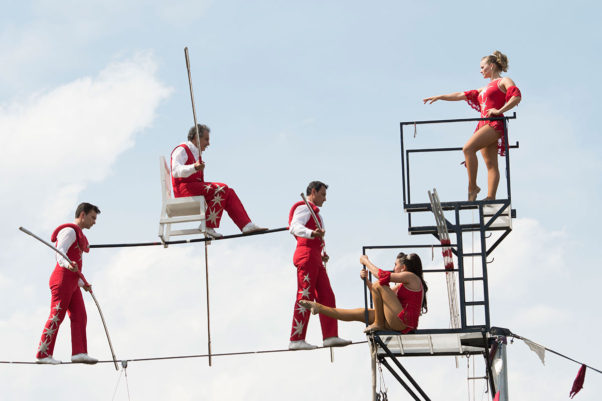 The Smithsonian Folklife Festival — the annual celebration of folk arts, crafts, music and cultures — opens it tents for the 50th time this weekend with more than 850 participants and more than 750,000 visitors expected. Over the years, the festival has celebrated the cultures of countries around the world, but for this special anniversary program, curators have focused their attention on America’s traditions and diversity. This year’s themes are Circus Arts featuring The Hebei Golden Eagle Acrobatic Troupe from China, the Wallenda Family Troup and the UniverSoul Circus on the big top stage along with aerialists, tightrope walkers, jugglers and clowns, as well as circus chefs and the food served to performers. The other focus is On the Move, a program about migration and immigrations. The festival will host two citizenship ceremonies, one for young children and one for teens, as well as evening concerts including one by the Chuck Brown Band at 7 p.m. Friday. The full schedule is online. 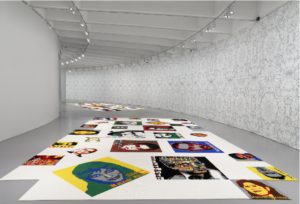 Artist Ai WeiWei displays portraits of activists made out of LEGO blocks at the Hirshhorn. (Photo: HIrshhorn)

Chinese artist Ai Weiwei brings a new, groundbreaking piece to the Hirshhorn Museum. Ai Weiwei: Trace is a stunning installation that showcases activists from around the world through 176 portraits, each comprised of thousands of plastic LEGO bricks. The installation is influenced by Weiwei’s own experiences with interrogation and incarceration (he was prohibited from traveling abroad by the Chinese government from 2011-15), as the individuals represented have also been detained, exiled or sought political refuge. The exhibit also features a 360-degree wallpaper installation, adding up to nearly 700 feet of Weiwei’s art residing in the Hirshhorn’s third floor Outer Ring galleries.

Daily through Jan. 1, 2018, from 10 a.m.-5 p.m. at the Hirshhorn Museum and Sculpture Garden, Seventh Street and Independence Avenue SW. Admission is FREE!

The Late Shift: Frestyle is the first of three late-night summer festivals. At the skate park meets secret pop-up art show, you can skate the indoor park with music by DJ Sharkey and Capps Music, check out the artwork, make your own art, listen to a poetry slam, take your photo in a photo booth and enjoy beer, wine, sandwiches and bronut ice cream sandwiches from Eats Place. 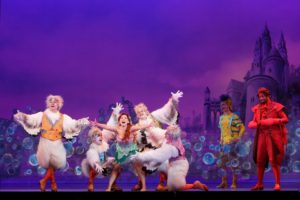 Broadway took its shot at a live-action version of The Little Mermaid long before Disney started reworking all of its animated tales with actors, and the musical snagged Grammy and Tony nominations in 2008. With five shows over four days of this family-friendly production by the Pittsburgh CLO and Kansas City Starlight, Wolf Trap will transform its Filene Center into an “Under the Sea” world for Ariel and friends – and Ursala, of course.

Rock artist Ben Folds was recently named artistic advisor at the Kennedy Center, and Declassified: Ben Folds Presents features Folds curating, hosting and performing with the National Symphony Orchestra. The show will feature new music from Folds, composer/performer Blake Mills and Cuban R&B artist Danay Suárez. This is the first event in the Ben Folds Presents series, which will blend 21st-century pop with orchestral music. Before the show, enjoy a free tasting from Port City Brewing and a free concert at Millennium Stage by “queer pop” pioneer Be Steadwell, whose music is a soulful blend of her jazz, a capella and folk music roots, and the Hot Pink Photo Booth. There will also be an after party with live band karaoke. 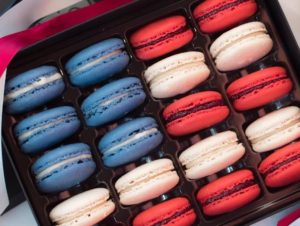 This Independence Day weekend, Georgetown is celebrating small businesses with its Independents Day event. Join in on the fun and shop, eat and play around M Street, Wisconsin Avenue, Cady’s Alley and side streets. The event includes exclusive deals from 35 independent merchants including restaurants, boutique shops and home design stores. Deals include discounted beer at Pizzeria Paradiso, 15-percent-off at Olivia Macaron and a rosé party at Chez Billy Sud. Add in live music at various corners and alleys throughout the neighborhood by Emma G, Brass Connection Band, Vasili Frankos, Raycurt Johnson & Puro Gusto, and Laissez Foure and your Saturday agenda is set. Shoppers can register to win a free $500 shopping spree in Georgetown. 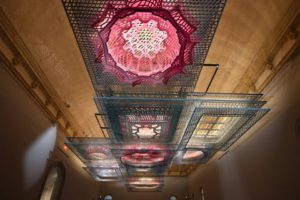 The Renwick Gallery turns its Bettie Rubenstein Grand Salon into a stunning visual puzzle with the new Parallax Gap exhibit. The immersive installation features renditions of ceilings inside nine famous American buildings that are laid atop or near each other, creating fascinating layers of both recognizable and mutated spaces that change as observers move underneath. Eastern and Western ideas of perspective are evident in this large-scale display that only the Renwick Gallery could host. 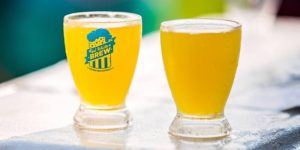 The Red, White & Brew Festival turns Yards Park into a beer garden and winery this weekend. (Photo: Drink the District)

Yards Park in the Capitol Riverfront neighborhood hosts the Red, White & Brew Festival that combines patriotic colors with brews, tunes and food just a few days before the Fourth. Wine lovers, do not fret: fruits of the vine will be available as well. Dozens of breweries and wineries from across the country and 16 breweries and cideries from the DMV will be on-hand to share their suds, including 3 Stars Brewing, D.C. Brau, Dogfish Head, Flying Dog and Devil’s Backbone. There will also be live music, food trucks, an artisan markets, Boozie Bingo and lawn and social games, such as giant Jenga and beer pong.

We the Party People 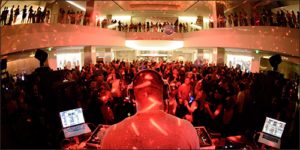 We the Party People is an afterhours party at the National Museum of American History from 7-11 p.m. Saturday.
(Photo: Brightest Young Things)

The National Museum of American History celebrates President John F. Kennedy’s 100th birthday with We the Party People a night party at the museum. You will be treated to lightning talks, 1960s-themed food from local restaurants and drink from an open bar, live music from local DJs Purity ring, Jonathan Toubin and Kid Congo Powers and artifacts that reflect the impact of the Kennedy era on modern American, including rate objects such as Jackie Kennedy’s clothing, that are rarely shown to the public. There will also be a photo booth, face painter, caricature artist, roaming performers and a scavenger hunt.

July 1 from 7-11 p.m. at the National Museum of American History, 14th Street and Constitution Avenue NW. Tickets are $55 in advance and $65 at the door. 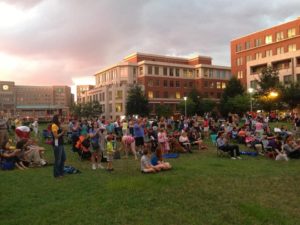 Saturday Cinema at Carlyle will bring an outdoor movie to John Carlyle Square Park the first Saturday of the month from July through October. (Photo: Red Brick Town)

Alexandria is hosting an outdoor summer film festival the first Saturday of every month from July to October. The Saturday Cinema at Carlyle series will run at John Carlyle Square Park in Alexandria, and the film this Saturday will be Top Gun. In addition, Alexandria’s Nice Cream will be on site selling handcrafted ice cream and Popped! Republic will be selling its gourmet popcorn. Other screening include Caddyshack at 8:14 p.m. on Aug. 5, When Harry Met Sally at 7:36 p.m. on Sept. 2 and The Birds at 6:41 p.m. on Oct. 7. Don’t forget your lawn chairs and picnic baskets.

Hedwig and the Angry Inch at 8 p.m. Tuesday through Sunday and 2 p.m. Saturday and Sunday through July 2 at The John F. Kennedy Center for the Performing Arts’ Eisenhower Theater, 2700 F St. NW. Tickets are $59-$159.

Summer of Yoko Ono daily from 10 a.m.-5:30 p.m. through Sept. 17 at the Hirshhorn Museum and Sculpture Garden, Seventh Street and Independence Avenue SW. Admission is FREE!