It Is a Food and Music Lovers Weekend

It is a foodie weekend in the DMV with Truckeroo near Nationals Stadium on Friday, Columbia Heights Day on 11th Street on Saturday, the Around the World Cultural Food Festival on the grounds of the Washington Monument on Saturday and Sunday, and the Grace Jamaican Jerk Festival at RFK Stadium on Sunday. There also a lot for music lovers with D.C. Jazz Fest at Yards Park all weekend and the Silver Spring Blues Festival at Downtown Silver Spring on Saturday as well as with the Sound of Music and Hedwig and the Angry Inch playing at the Kennedy Center. 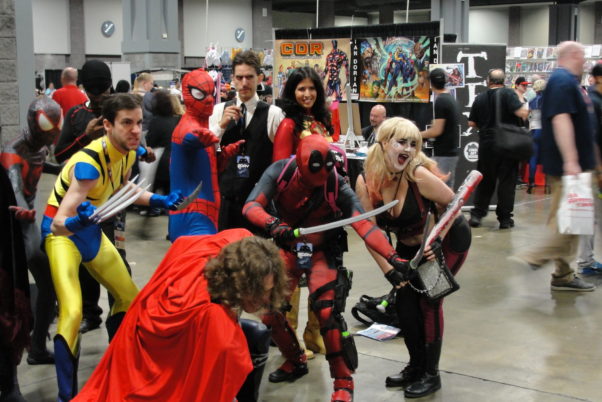 Stars of screens big and small, popular comic book creators and thousands upon thousands of their fans will descend upon Awesome Con, a weekend-long, comic book and sci-fi convention of epic proportions. Prepare for an atmosphere that you won’t find anywhere else in D.C. this summer (think cosplay, or lots and lots of costume-clad fans). There will be comic books, collectibles, toys, games, original artwork and more on sale along with discussion panels, costume contests, trivia contests, gaming tournament and activities for kids. Special guests include David Tennant, Stan Lee, John Barrowman, Felicia Day and many more. 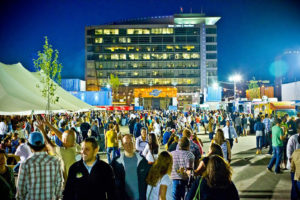 Truckeroo returns to the Bull Pen outside Nationals Park on Friday with about a dozen food trucks. (Photo: Half Street Fairgrounds)

Truckeroo brings local food trucks to The Bullpen near Yards Park in the bustling Capitol Riverfront neighborhood once a month to dole out everything from cookies and milk to Vietnamese sandwiches. About a dozen wheeled food sellers show up, and there are picnic tables and shade to keep things cool. This month’s tucks include Bonmi, Surfside, Feelin’ Crabby, Big Cheese, BBQ Bus, Goodies Frozen Custard and more. There will also be games, cold beverages and live music to create the full-on summer experience.

Marlene Dietrich: Dressed for the Image

The National Portrait Gallery examines one of Hollywood’s earliest and most formidable stars in the must-see summer exhibit Marlene Dietrich: Dressed for the Image. Dietrich came to fame when talking pictures were just gaining prominence, becoming a fashion icon who challenged notions of femininity and patriarchy. She challenged the strictly limited notions of femininity at the time through her lifestyle and fashion. Relying on her good looks, striking voice, sense of humor and no-nonsense personality, Dietrich achieved international fame during her long career. The German-born star remains a symbol of anti-Nazism, a fashion icon and an influential figure of the LGBTQ community. View photos, film clips and letters from this gender-bending, earth-shaking actress who remains an influential figure to this day.

AFI Docs, the American Film Institute’s international film festival, screens diverse documentaries ranging in topics from national politics, education and health to music, sports and culture. Considered one of the leading documentary festivals in the country, it is an annual summer commemoration of the power of storytelling in film. The closing night film is Year of the Scab, directed by Emmy winner John Dorsey, which chronicles the 1987 NFL strike and the Washington Redskins’ team of substitute players who overcame the odds to defeat the best teams in the NFL. It will be shown at the Newseum beginning at 7 p.m. followed by a Q&A with Dorsey. 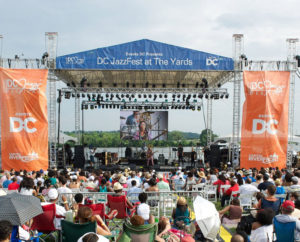 Now in its 12th year, the D.C. Jazz Festival brings national and local musicians to large venues, as well as intimate jazz clubs all over the city with its Jazz in the ‘Hoods series. The festival brings more than 125 performances to 40 venues in the city – both emerging and renowned musicians. A total of 90 bands and 300 artists will strut their stuff on stage. Lineup highlights include Pat Metheny, Gregory Porter, Robert Glasper Experiment, Lalah Hathaway, the Kenny Garrett Quintet, Roy Haynes, Ron Carter and Jacob Collier. This weekend features the D.C. Jazz Fest at the Yards with Lori Williams and Ola Onabulé performing free on Friday night beginning at 5 p.m.; the Robert Glasper Experiment, Kenny Garrett, Kandace Springs and other on Saturday from 2-10 p.m. and Gregory Porter, Black Violin, the New Century Jazz Quintet and Youngjoo Song from 2-9:30 p.m. on Sunday. Tickets for Saturday and Sunday are $49.

June 9-18 at various times and locations around the city including the Kennedy Center and Yards Park, 355 Water St. SE. Some concerts are free; most are ticketed.

The 10th annual Source Festival showcases new theater works centered around the “covert catalyst” theme, many by local artists through July 2. The main play is Perfect Arrangement by Topher Payne set in a 1950s Georgetown duplex. Bob and Millie live next door to Norma and Jim, in what appears to be a perfect arrangement. The twist is that all four are gay and have cultivated fake identities outside of their homes in order to live truthfully inside. The cultural shift of the 1950s brings about a moment of change when their carefully crafted falsehood is thrown into chaos. There are also three full-length play readings. Other offerings include six 10-minute play competitions that highlight super short (and often super funny) works, six returning 10-minute plays and two artistic blind dates, which see very different artists — a cellist and an actor, for example — collaborating on genre-bending performances

The Sound of Music

Rodgers and Hammerstein’s The Sound of Music has been dazzling audiences from both the stage and the screen for more than 50 years, and you can catch a stirring production of the play this June in the DMV. The story of Maria and the von Trapp family is directed by three-time Tony Award winner Jack O’Brien. Hear (and sing along) to renditions of classics such as Do-Re-Mi, Climb Ev’ry Mountain and the title song.

Hedwig and the Angry Inch 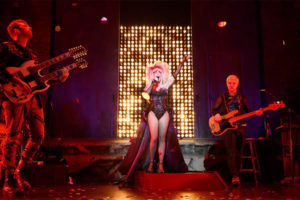 Hedwig and the Angry Inch is at the Kennedy Center through July 2.
(Photo: Joan Marcus)

One of the most acclaimed plays of the last 25 years comes to the Kennedy Center. Hedwig and the Angry Inch won four Tony Awards, and this staging is helmed by Tony Award-winning director Michael Mayer and stars Tony Award-nominee Euan Morton. A rock and roll score soundtracks this gender- and genre-bending story that weaves an inspiring tale about finding your identity, featuring an unforgettable main character. 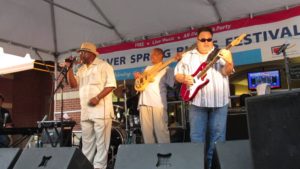 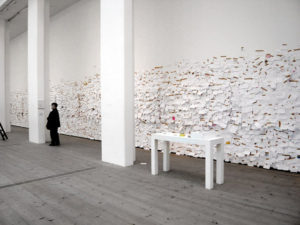 Yoko Ono’s My Mommy Is Beautiful will be installed in the Hirshhorn’s lobby for the summer. (Photo: Hirshhorn Museum)

In honor of the 10th anniversary of Yoko Ono’s Wish Tree for Washington, D.C. coming to the Hirshhorn, the museum presents the Summer of Yoko Ono featuring the artist’s most iconic and emotionally charged installations and performances. Visitors can attach handwritten wishes to Wish Tree per usual (nearly 80,000 wishes have been collected over the years), as well as attach a photograph or note to My Mommy Is Beautiful, an installation that will stretch the entirety of the museum’s lobby. Ono’s Sky TV for Washington, D.C. will also be on view on the third level, a constant live-feed of the sky above. The exhibit concludes with a day-long concert in September that will celebrate Ono’s unique performances. 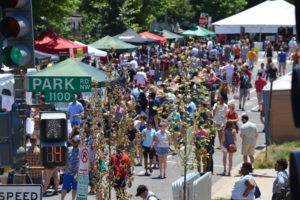 The 12th annual Columbia Heights Day street party takes place Saturday on 11th Street NW from Park Road to Irving Street. There will be three stages with live music, dance and fitness classes, plus a beer garden and local vendors and businesses. The event is all-ages with plenty of family-friendly options; kids can play at the carnival on the Harriet Tubman Elementary School Field.

June 17 from 11 a.m.-6 p.m. along 11th Street NW from Park Road to Irving Street and on the Harriet Tubman Elementary School athletic field. Admission is FREE!

Around the World Cultural Food Festival 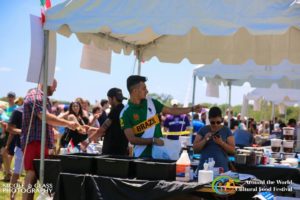 The Around the World Cultural Food Festival will bring from from other coutnries to the grounds of the Washington Monument on Saturday and Sunday. (Photo: Nicole Glass Photography)

The Around the World Cultural Food Festival returns to the grounds of the Washington Monument this Saturday and Sunday. Purchase plates of delicacies from more than 30 countries and see performances of traditional dance and music, too. Each country is represented by only one restaurant, so there will be a diverse and selective offering for your globe-trotting tummy. There will also be a cultural fashion show that visitors can participate in. 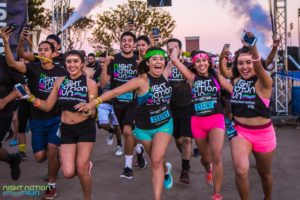 Billed as the nation’s first running music festival, Night Nation Run comes to RFK Stadium to liven up your Saturday night. Run, walk, skip or dance from station to station on a lit-up racecourse, featuring DJ stages, dancers, light-shows, selfie-stations and glow gear giveaways along the way. The night culminates with a main stage after party with EDM DJs and special guest performers. Registration includes a t-shirt, a glow necklace, free giveaways and more.

The Grace Jamaican Jerk Festival is a Caribbean culinary festival that will serve up jerk chicken, pork, fish, shrimp, lobster and even jerk ice cream. In addition to vendors serving jerk foods, there will be a cook-off competition and culinary demonstrations from Chopped winner Andre Fowles and from Chef Irie, host of PBS’ Taste of the Islands. Dance to Jamaican reggae, Trinidadian soca, and classic hits with performances by Tarrus Riley, Romain Virgo, Queen Ifrica, Bunji Garlin and Fay Ann Lyons on the main stage or listen to folk and oral presentations on the cultural stage. A kids’ zone will offer games and other activities including a bounce house, rides, slides and rock clibming.