Walt Disney Stuidos’ Pirates of the Caribbean: Dead Men Tell No Tales sailed to the top of the Memorial Day weekend box office (May 26-29), with a $78.48 million four-day holiday weekend ($62.98 million three-day weekend). 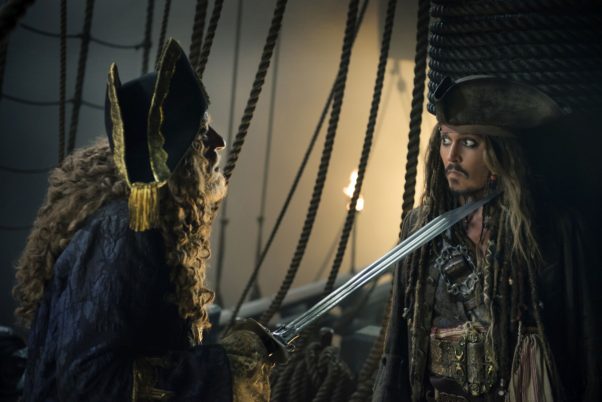 Pirates of the Caribbean: Dead Men Tell No Tales sailed to the top of the Memorial Day weekend box office with a $78.48 million four-day holiday weekend. (Photo: Walt Disney Studios)

Despite first place, the adventure sequel starring Johnny Depp and Javier Bardem marks the lowest opening of the fivePirates of the Caribbean films, adjusted for inflation. The film starts 9.0 percent behind the inflation-adjusted start of original The Curse of the Black Pearl in 2003, previously the lowest opening in the series. Dead Men Tell No Tales is also only the 28th-highest Memorial Day weekend ever, adjusted for inflation.

In the process, Disney passed $1 billion domestically, the first studio to reach that mark this year. It has done so in large part based on the success of two other films which also make headlines last weekend for different reasons.

Disney’s Guardians of the Galaxy Vol. 2 took second place with $27.19 million ($20.91 3-day), which surprised many as most expected Paramount Pictures’ Baywatch to take the runner-up slot.

Guardians Vol. 2 held on by having smaller declines than typical for the fast-falling superhero genre, falling only 39.7 percent. Credit that to positive word of mouth and weaker-than-expected competition from the likes of Baywatch and King Arthur: Legend of the Sword.

Baywatch flailed in the water, taking third place with $23.11 million ($18.50 million 3-day), in line with the lowest end of expectations. The R-rated action comedy starring Dwayne Johnson and Zac Efron marks the first real box office disappointment in years for Johnson, who last year became the highest-paid actor in Hollywood on the strength of such smashes as Furious 7, Central Intelligence and San Andreas.

Baywatch debuted considerably lower than almost every other comparable film such as 21 Jump Street, 22 Jump Street, We’re the Millers and The Hangover Part III. It did begin about in line with the $17.8 million opening of Let’s Be Cops, but that film had less star power, wasn’t based on popular original source material and didn’t open in high-grossing May.

With a 10th place finish with $2.01 million ($1.48 million 3-day), Disney’s Beauty and the Beast spent its 11th weekend in the top 10, becoming the fifth film in the past four years to achieve that mark. It also crossed $500 million domestic gross last weekend. It now stands at No. 8 in pure dollars, while ranking No. 72 when adjusted for inflation.

This year has already seen three films reach 11 weekends in the top 10: Beauty and the Beast, Hidden Figures and La La Land. The last time this happened was 2003, with Chicago, Finding Nemo and Pirates of the Caribbean: The Curse of the Black Pearl. With 2017 not even halfway done yet, it is still possible that another film or two could reach the milestone before the year is out.