Celebrate Memorial Day in the DMV

The DMV knows how to kick off summer. Memorial Day weekend is packed with fun, with parades, a motorcycle rally, concerts, a choral festival, live music and much, much more all on the docket for the long weekend. If you aren’t heading to the beach, check out all the things to do and prepare to celebrate the holiday in style. 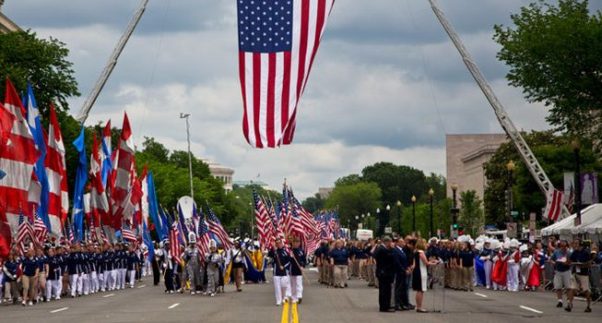 The National Memorial Day Parade ushers marching bands, youth groups, floats, performers and, of course, veterans, down Constitution Avenue. The televised parade is the largest of its kind in the U.S. and honors those who have served or presently serve in the U.S. military. This year’s grand marshals include filmmakers Ken Burns and Lynn Novick, Gen. Richard Myers, USAF (Ret.) and dozens of surviving World War II veterans. Celebrities include actor Joe Mantegna, chef Robert Irvine and Mis America 2017 Savvy Shields. Performers include Daughtry, Tom Dixon, John Ondrasik of Five for Fighting and the USO Show Troupe. Arrive early for the best viewing options.

May 29 starting at 2 p.m. along Constitution Avenue NW between Seventh and 17th Streets. Admission is FREE!

One of the season’s most anticipated exhibits, Sharks, comes to the National Geographic Museum. More than 100 million sharks are killed each year, endangering the species. Photographer Brian Skerry’s work shows how integral sharks are to our ecosystem and that humans should do whatever it takes to preserve and appreciate the creatures. The immersive display also includes interactive experiences, artifacts, videos and models. 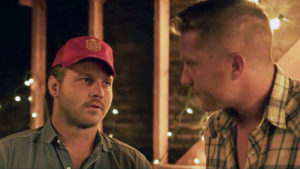 The GI Film Festival presents a lineup of 56 films that aren’t your typical war movies. There are stories of heroism and sacrifice, but also short films and features about women warriors, the greatest generation, returning home, veterans in the arts and more. The films include every branch of the military and every American conflict from World War I through the Wars in Iraq and Afghanistan. Guests scheduled to appearincluding actors Tom Berenger, Judd Nelson, Kevin Durand, Linda Powell and Jamie Kaler and musician Ayla Brown. The festival concludes at 8 p.m. Sunday with Best of the Fest Awards

This weekend is the seventh annual Middle Eastern Food Festival. Eat shawarma, falafel, kabobs and manakish and sweets and drink coffee. There will be artifacts, hookah and activities for kids including a moonbounce.

Frontier is a new ballet inspired by JFK’s desire for the U.S. to be the first country to put a man on the moon. (Photo: Kennedy Center)

Julie Kent, The Washington Ballet’s artistic director, presents her first-ever commissioned work. Kent’s piece, Frontier is heavily inspired by President Kennedy and his desire to make America an artistic, cultural and intellectual power, including his determination for the U.S. to be the first country to put a man on the moon. Choreographer Ethan Stiefel met with members of NASA to discuss space travel, so movements will be inspired by the concept of “zero gravity.” Another unique aspect: the lead astronauts will be played by women. It also features pieces choreographed by Antony Tudor and Sir Frederick Ashton. 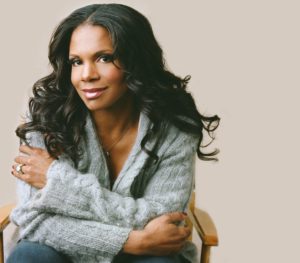 There seems to be very little that Audra McDonald can’t do. The winner of a record six Tony awards, she was a cast member on TV’s Private Practice and is one of the few movie actors to have played a singing wardrobe, which she did in this year’s live-action Beauty and the Beast. Now, McDonald is bringing her soaring soprano to the DMV for a concert featuring music from the stage and screen, as well as originals written specifically for her.

The politics of gender take center stage in HIR, a dark comedy from Woolly Mammoth Theatre Co. Isaac returns home from war to find his parents have split, with his mother fighting patriarchy in full force and his father wearing clown makeup while being force-fed estrogen pills. Meanwhile, his sister is now a genderqueer anarchist, adding to the upside-down world he has returned to. Humor abounds in this zany tale that asks how families handle political divisions of the most extreme order.

The Washington Jewish Film Festival, which features films from around the world, wraps up this weekend. Across its 11 days, Jewish history, culture and experiences will be celebrated with more than 80 screenings, many of which are regional, U.S. or world premieres. There will also be discussions with filmmakers and experts after screenings. This year’s festival includes classics Angry Harvest at 7 p.m. on Saturday, Cabaret at 12:30 p.m. on Saturday and To Be or Not to Be at 11:30 a.m. on Sunday. This year’s closing film is Fanny’s Journey, which is baesd the true story of bravery strength and survival during World War II centered on young girl who will stop at nothing and fears no one. It will be shown at 7:15 p.m. Sunday at the JCC. Make sure to check out the full calendar to plan your movie-going experience.

At various time through May 28 at the Goldman Theater at the Edlavitch DCJCC, 1529 16th St. NW; AFI Silver Theater and Cultural Center, 8633 Colesville Road, Silver Spring; Bethesda Row Cinema, 7235 Woodmont Ave., Bethesda; and E Street Cinema, 555 11th St. NW. Tickets are $14.95-$34. Tickets for Saturday screenings before 6:15 p.m. must be pre-purchased and will not be sold at the door due to Shabbat. 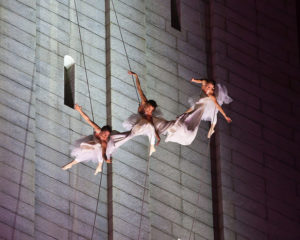 Bandaloop will perform during the Kennedy Center’s open house on the side of the building. (Photo: Steve Cota)

Enjoy dozens of free performances and activities for the entire family at the Kennedy Center’s JFK at 100 Open House that will feature street art, hip hop, skateboard culture and the classic and contemporary arts in one place. Dance troupes will show off their skills, a skate park and music stage will open on the plaza and a UK spoken word artist will perform. There will be activities inside and out including the National Memorial Day Choral Festival from 2-3:30 p.m. with 300 singers performing patriotic favorites, Bandaloop vertical dance troop performing from the rooftop from 3-3:30 p.m. and 5:30-6 p.m.; Beginner Boogie Woogie Dance Lessons with Gottaswing from 5-6 p.m. and 7-8 p.m.; a Chuck Berry Tribute with Daryl Davis from 6-7 p.m. and 8-9 p.m.; the Washington Ballet performing Frontier, a new ballet inspired by JFK, from 3:15-4 p.m.; tai chi from 1-2 p.m. and 4-5 p.m.; the National Symphony Orchestra’s Instrument “Petting Zoo” from 1:45-3:15 p.m. and 4-5:15 p.m.; DJs on the front plaza and more. 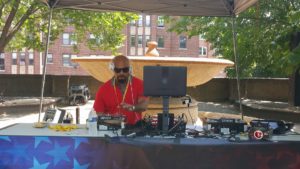 The third annual DMV House Music Fest, an outdoor dance party, will feature sets by DJs Ozzie Mandias, Jay Jay Tate, Sam “The Man” Burns and Timmy Regisford. It is hosted by DJ Kevy Kev & Chosen. Pack your picnic baskets, tents and chairs —an umbrella wouldn’t be a bad idea either—and lace up your dancing shoes for a day in the park. Food trucks will be on-site. 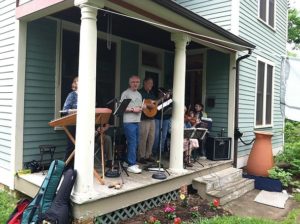 The annual Tacoma Porch music festival is coming to 22 porches at homes within a mile or less of each other. Each porch will host two acoustic music acts, with the most of the 55 bands presenting their 45-minute mini concert twice. Sets will begin at 2 p.m., 3 p.m., 4 p.m. and 5 p.m. The full schedule and al the locations are listed online.

May 27 from 2-6 p.m. at various locations in Tacoma Park, Maryland. Admission is FREE!

The annual Rockville Town Center Hometown Holidays music festival returns with concerts by such bands as the Lloyd Dobler Effect, Chopteeth Afrofunk Big Band and the Nighthawks; a children’s play area; carnival rides; and food from local restaurants at Taste of Rockville on Maryland Avenue from noon-10 p.m.. On Memorial Day, the Rockville Band and Chorus will perform at 9 a.m. followed by a ceremony at 9:30 a.m. and the 73rd annual Memorial Day parade at 10:30 a.m. with more than 60 parade units including marching bands, drill and majorette units, floats and more beginning at Martins Lane and marching south on North Washington Street making a left onto Beall Ave. turning right on Maryland Avenue through Rockville Town Square and turning left onto East Montgomery Avenue. 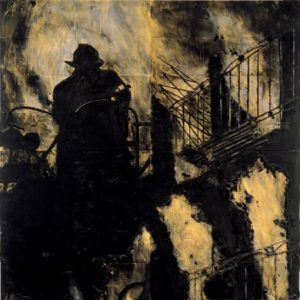 In the first exhibition to focus on the most respected works of Donald Sultan’s career, visitors can experience the mind-bending dichotomies shown in The Disaster Paintings. Sultan used images from the daily newspaper, as well as materials like tar and Masonite tiles, to create works that highlight just how fragile man-made structures such as industrial plants and cars truly are. You will be struck by the detailed darkness of Sultan’s pieces while also contemplating exactly what Sultan wanted you to: the cycle of life and death. 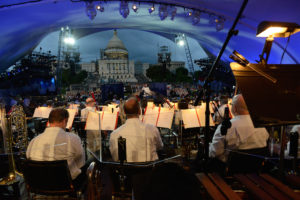 PBS’s annual National Memorial Day Concert salutes the sacrifice made by the men and women in uniform as well as their families. Actors Joe Mantegna and Laurence Fishburn will host the proceedings, which will feature numerous other celebrity performers including actors Gary Sinise, Vanessa Williams, Auli’i Cravalho, the voice of Moana, John Ortiz, Mary McCormac and Ana Ortiz; Gen. Colin Powell, singers Scotty McCreery and Five for Fighting, the National Symphony Orchestra and others. Food and low lawn/beach chairs are permitted. Alcohol, bicycles and large umbrellas are prohibited along with the usual list of items. 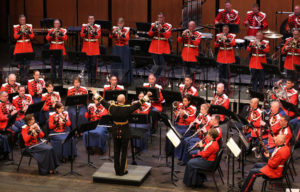 Wolf Trap kicks off its 2017 season with Summer Blast Off featuring the “President’s Own” United States Marine Band. This year’s concern is packed with popular and classical favorites including patriotic marches, a Ragtime solo, a new arrangement of music from the Broadway show Guys and Dolls and Tchaikovsky’s iconic 1812 Overture. The concernt will be capped with a fireworks display. 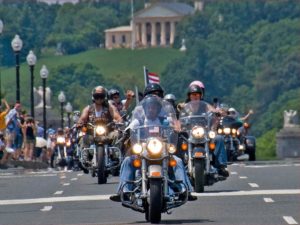 The Rolling Thunder Motorcycle Rally. brings together motorcycle riders from all over the U.S. to honor POWs and MIAs who served their country during the Vietnam War. This “ride for freedom,” which celebrates its 30th anniversary this year, draws more than 900,000 riders, featuring a route that starts at the Pentagon and winds along the National Mall to West Potomac Park. Thunder Alley with vendors is located at 22nd Street and Constitution Avenue Vietnam Memorial with vendors selling Rolling Thunder T-shirts, food, leather, riding gear, jewelry and motorcycle paraphernalia. Tbere will also be speakers and displays on veteran related issues beginning at 9 a.m. Saturday through Monday.

May 28 beginning at 7 a.m. at the North Pentagon Parking Lot. The ride leaves and noon and heads across Memorial Bridge onto Constitution Avenue heading east to Pennsylvania Avenue, where it turns right onto Third Street and heads west on Independence Avenue to West Potomac Park. Feel free to join the ride or just watch along the route. Admission is FREE! 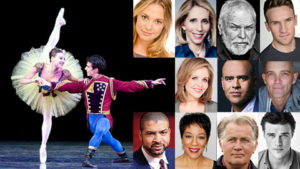