Walt Disney Studios’ Guardians of the Galaxy Vol. 2 dominated the box office last weekend (May 12-14), falling 55.5 percent from its debut weekend as it fell just short of the $250 million mark after only 10 days in release. Its $65.26 million weekend represents a stronger hold than comparable Disney Marvel titles such as Captain America: Civil War, Avengers: Age of Ultron and Iron Man 3. 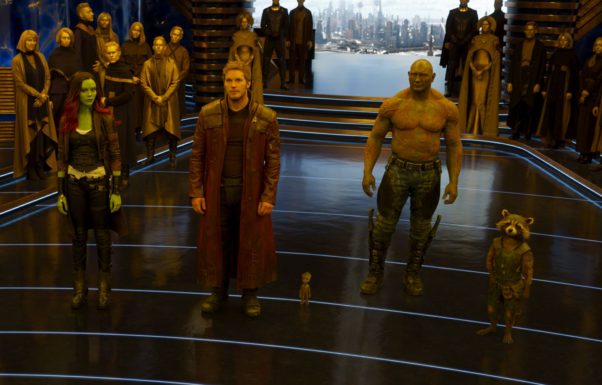 Guardians Of The Galaxy Vol. 2 led for the second straight weekend with $65.26 million. (Photo: Marvel Studios)

In only two weekends, the Guardians of the Galaxy sequel has already outperformed the lifetime domestic gross of titles such as Doctor Strange with $233 million and Thor: The Dark World, which grossed $206 million.

The overseas performance was just as strong, earning $52.2 million from 56 territories. The film opened in Japan last weekend, its final market, to $3 million, a better showing than the premieres of its predecessor, Captain America: Winter Soldier and Thor: The Dark World in the same market. The film’s $384.4 million outside of North America has already surpassed the overseas lifetime gross of Ant-Man at $339 million and Iron Man 2 with $312 million. Leading overseas markets are China at $80.5 million, the UK at $42.5 million, Russia at $23.1 million, Germany at $23 million, Australia at $20.1 million and France at $20.1 million.

Guardians of the Galaxy Vol. 2 currently stands at $631 million worldwide and has already passed the lifetime global run of Iron Man 2 with $624M million, Iron Man with $585 million and

Snatched, the R-rated comedy starring Amy Schumer and Goldie Hawn, brought in $19.54 million over its opening weekend coinciding with Mother’s Day. The debut fell behind Schumer’s previous comedy, Trainwreck, which opened at $30 million in July 2015.

King Arthur: Legend of the Sword had to settle for third place in its North American debut, overshadowed by Guardians of the Galaxy Vol. 2’s stellar second-weekend hold. The $15.37 million launch is surely be disappointing for Warner Bros. Pictures.

King Arthur: Legend of the Sword earned a total of $29.1 million from 51 markets in its overseas launch, combining with its North American debut to produce a $43.8 million worldwide opening weekend. The film is keeping pace with Kingsman: The Secret Service across several markets. It finished the weekend as the top film in Russia, Scandinavia, the Netherlands, United Arab Emirates, Indonesia and Thailand. Russia is the film’s top overseas opener with a $5.2 million take from 2,514 screens. China follows with a $5 million third place finish from 7,200 screens. Key markets like Australia, France, the UK and South Korea will open in the coming week.

Also opening last weekend, BH Tilt’s Lowriders did quite well in limited release, pulling in $2.40 million from only 295 theaters for an eighth place finish.

Twentieth Century Fox’s Alien: Covenant, which debuts in the U.S. on Friday, was released in 34 international markets last weekend earning $42 million. It was No. 1 in 19 of its opening markets including South Korea with $7.2 million, the UK with $6.4 million, France with $4.5 million, Australia with $3.1 million, Spain with $1.9 million and Hong Kong with $1.8 million. This comng weekend, along with its domestic debut in 3,600+ theaters, the film will open in 52 markets including Germany, Russia and Sweden.

The top 10 films last weekend earned an estimated $124.42 million total. That is 32.6 percent lower than the total earned by the top 10 the previous weekend. It is also 46.4 percent below the $232.40 million earned by the top 10 on the weekend last year, when Captain America: Civil War led for its first weekend with $179.14 million.