Plenty of Sun and Fun Fill This Weekend

This weekend’s forecast calls for partly sunny skies with highs around 91 degrees on Saturday and 84 degrees Sunday, so don’t forget your sunscreen if you will be attending any of the many outdoor events in the DMV.

For the 14th year, Georgetown’s Book Hill neighborhood turns into its own version of Paris throughout the weekend. The Georgetown French Market features more than 40 locally owned merchants, restaurants, galleries and salons participating in an open-air shopping frenzy. Expect discounted items and rare finds, as well as a photo booth, live music stages and much more on Saturday and Sunday. There will also be roaming street performers including jugglers, stilt walkers, face painters and acrobats. 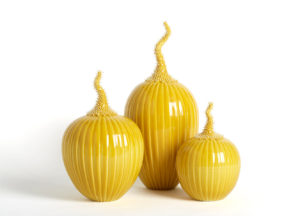 Cerarmics like these from artist Cliff Lee will be on sale at the Smithsonian Craft Show Friday and Saturday. (Photo: Douglas Lee)

The annual Smithsonian Craft Show showcases some of the most impressive sculptural design and objects in the U.S. Talented ceramic, jewelry, metal and furniture crafters – some 120 artists in all – will show off their creativity in an expansive exhibition.

This year’s Washington Antiquarian Book Fair includes a copy of To Kill a Mockingbird signed by Harper Lee and the cast of the 1962 film. (Photo: Jeff Marks)

You can splurge or just stare at the 42nd annual Washington Antiquarian Book Fair This annual curated festival featurs rare books, manuscripts, maps and sought-after autographs. This year’s treats include a copy of To Kill a Mockingbird signed by Harper Lee and the cast of the 1962 film listed at $85,000. There are also White House Letters from Jackie Kennedy and first editions of Sylvia Plath poetry. But there are items appealing to those on a smaller budget as well, with more than 60 exhibitors on hand, including appraisers on Saturday to check out any dusty books you have been hanging on to. Friday features literary games to play and on Saturday there will be an appearance by Typewriter Rodeo — poets who use vintage typewriters to pound out custom poems for you in about three minutes. 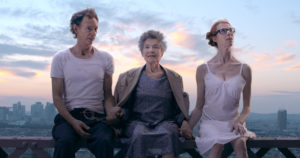 Lost in Paris closes this year’s Filmfest D.C. with screenings at 3:30 and 7 p.m. at the French Embassy on Sunday. (Photo: Oscilloscope)

The 31st annual Filmfest D.C. wraps up this weekend. The international film festival showcases more than 80 independent and foreign films from 45 countries. It features comedies, dramas, thrillers, shorts and documentaries. A new category this year, Division and Debate, addresses today’s current issues. This weekend’s highlights include Footnotes about a group of women who attempt to sever the French shoe factory from moving offshore at 6:30 p.m. Friday at Mazza Gallerie; The African Doctor about a small French village that hires a Congolese doctor who tries to integrate into the rural village at 8:30 p.m. Friday at Mazza Gallerie; two groups of short films at 3:30 and 6:15 p.m. Saturday at E Street Cinema; and the closing night film Lost in Paris, about Fiona, a small town librarian whose life is turned upside down when her 93-year-old Aunt Martha goes missing in Paris. It will show at 3:30 and 7 p.m. Sunday at the Embassy of France. Tickets are $25.

Through April 30 at various times at AMC Mazza Gallerie, 5300 Wisconsin Ave. NW, and Landmark’s E Street Cinema, 555 11th St. NW. Individual screenings are $13 in advance or $14 at the door. Student tickets are $10 at the door only with student ID. A director’s package with 10 tickets for $100 and a weekday package with 4 tickets for $45 are also available online.

One of Shakespeare’s most revered plays takes another turn at Sidney Harman Hall courtesy of Shakespeare Theatre Company. Macbeth is a harrowing tale of a country ripped apart by invasion and civil war, with the title character and his lady at the center of a series of murders. Director Liesl Tommy brings Broadway experience to this classic, allowing audiences to see Macbeth in a new light.

The second annual D.C. Chocolate Festival is a chocolate lover’s dream. It brings together chocolate makers and chocolate enthusiasts for a day of tastings, educations workshops and keynote addresses. More than 30 chocolate vendors will display their wares.

Environmentalists will once again rally this weekend, this time for the People’s Climate March. The demonstration comes one week after the March for Science and Earth Day rally and on President Trump’s 100th day in office, but organizers say Saturday’s march will be more political and aimed at specific Trump administration policies. (Trump will be at a rally in Harrisburg, Pa.) Organizers are prepared for 50,000-100,000 people. Actor Leonardo DiCaprio, Virgin Airlines founder Richard Branson and former vice president Al Gore are expected to attend.

April 29 with line-up beginning at 11 a.m. at Third and Jefferson Streets SW and the march begins at 12:30 p.m. from Sixth Street and Pennsylvania Ave. NW and proceed to the White House. From 3-5 p.m. on the Washington Monument grounds, there will be speakers, music and art. Admission is FREE! 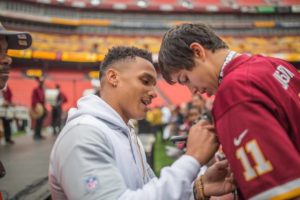 Watch the fourth and fifth round draft picks for the Washington Redskins be announced live from FedEx Field during the Draft Day Party. Current players will be on hand along with alumni as well as the 2017 first rounds draft pick and other early round picks. Other activities include the debut of the 2017 cheerleaders who will sign autographs from noon-1 p.m. and perform at 2 p.m., a performance by the drumline, access to the locker room, photo opportunities with the Super Bowl trophies, discounts at the retails store. Concessions will be open and there will also be kid-friendly activities such as testing your passing and field goal kicking skills, “Dress Like a Redskins Player” and more.

April 29 starting from 11 a.m.-3 p.m. at FedEx Field, 1600 FedEx Way, Landover. Admission is FREE, but pre-registration is required. Park in Lot A and enter through Gate H. Arena Drive will be closed.

Back for its ninth year, the Art Hop is a weekend long-festival featuring live performances and a range of artwork including painting, photography, sculpture, mixed media, jewelry, pottery, mosaic and more. Work by more than 70 artists will be shown and available to sale throughout Takoma and Takoma Park. There will also be live music at the gazebo and events such as a sock monkey-making workshop for kids, classes at Dance Exchange and more.

With speeds up to 8 mph, the first Adams Morgan Pinewood Grand Prix rolls into town this weekend. Custom built cars, crafted from a block of wood, four plastic wheels, four nails and a dream, will forego traditional combustion engines in favor of gravity. The race is open to all ages (though adults who win should probably give their trophies to a nearby child if it looks like they are taking the loss hard). Cars will be timed over the course of several heats to determine which is the fastest. Race categories will include best looking and one specifically for neighborhood businesses to compete against each other. Car kits are available at Adams Morgan Ace Hardware, Urban Dwell and The Brass Knob. Cars cannot be more than 2 1/4 -inches wide, 7-inches long or weight more than 5 ounces.

April 29 with registration at 10 a.m. and racing at noon at Kalorama Park, 1840 Columbia Road NW. Admission is FREE! 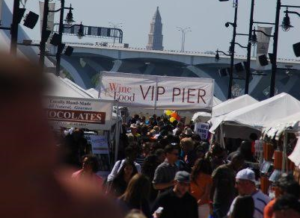 The National Harbor Wine & Food Festival is this weekend.
(Photo: The Trigger Agency)

The National Harbor Wine & Food Festival returns for the 11th year along the banks of the Potomac River. This year’s festival will include more than 150 international wines, spirts and beers along with local and regional favorites. There will be a craft Bier Garden, cooking demonstrations from chefs Scott Drewno at 2 p.m., Victor Albisu of Del Campo and Taco Bamba at 3 p.m. and Seng Lunngrath of Thip Khao at 4 p.m. on Saturday and Majorie Meek-Bradley of Smoked & Stacked at 2 p.m. and Rock Harper at 3 p.m. on Sunday. There is also a wine store on-site if you find a wine you want to take home.

April 29 and 30 from 1-6 p.m. at National Harbor, 165 Waterfront St., Oxen Hill. General admission is $39 in advance or $45 at the gate and includes a souvenir wine glass, unlimited samples, cooking demos and entertainment. Two-day admission is $69 as is VIP admission, which is $80 at the gate, with all the above plus an hour early admission at noon, gift back and access to the VIP Pier.

Picnic in the gardens to Tudor Place on Saturday.
(Photo: Tudor Place)

Enjoy a picnic on Tudor Place’s historic grounds before or after perusing a wide range of plants for sale at its annual Eatth Day Plant Sale and Picnic. This is the only time that the estate allows picnicking on its gorgeous property, so take advantage of the free opportunity. Enjoy the historic gardens and browse a range of heirloom and native sun to shade perennials to added to your own garden. Take your own food or purchase some from Arlington’s House of Steep on-site, which will have light refreshments, healthy food and a variety of plant-based treats. Plants for sale include perennials, as well as tropical and house plants. There will be a terrarium demonstration from 1-3 p.m.. Preregistration has closed, but there will be a limited number of registrations available on-site Saturday. 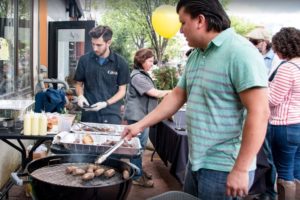 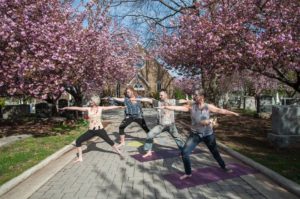 Perfect your corpse pose at Zombie Yoga with Kelly Carnes, who will be leading an all-levels zombie-themed yoga class in honor of Walpspurgisnacht, the springtime “witches holiday” observed in Northern Europe that marks the halfway point to Halloween. Don’t forget your mat. Students are encouraged to wear costumes. Proceeds will go to the cemetery’s preservation fund.

Artomatic through May 6 from noon-10 p.m. on Wednesdays and Thursdays, noon-midnight Fridays and Saturdays and noon-8 p.m. Sundays (closed Mondays and Tuesdays) on floors 3-9 at 1800 S. Bell St., Crystal City. Admission is FREE! Parking is also free after 4 p.m. on weekdays and all day on weekends.

Frédéric Bazille and the Birth of Impressionism from 11 a.m.-6 p.m. daily through July 19 at the National Gallery of Art, Sixth and Constitution Avenue NW. Admission is FREE through July 9.

In the Heights at 8 p.m. on Thursdays, Fridays and Saturdays and 2 p.m. on Sundays through May 21 at GALA Hispanic Theatre, 3333 14th St. NW. Tickets are $60 for adults and $40 for seniors 65 and older, students and members of the military.