Blue Crab Population in Bay Down This Year

Attention blue crab lovers, get your fill now while you can. They may become scarce by mid-summer because of a drop in the Chesapeake Bay’s crab population this year. 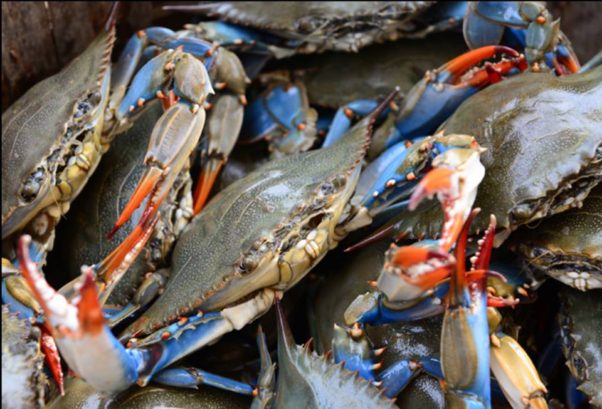 The blue crab popluation in the Chesapeake Bay is down 18 percent this year according to the state’s dredge report.
(Photo: Ivy City Smokehouse/Facebook)

Despite an 31 percent increase in the number of adult female blue crabs spawning in the Chesapeake Bay this year, the overall crab population is down, according to a survey of the Maryland Department of Natural Resources (DNR) and the Virginia Institute of Marine Science (VIMS).

Blue crab season started April 1 and runs through Dec. 15. The lower numbers point to a strong first half of the crab season for crabbers – until midsummer, they will be catching many of last season’s abundant juveniles that have matured enough to be harvested. But into the fall, crabs that meet the size minimum could become scarcer, DNR officials said.

The annual winter dredge survey, conducted by DNR and the VIMS since 1990, is the primary assessment of the Chesapeake Bay’s blue crab population. In the survey, biologists use dredge equipment to capture, measure, record and release blue crabs at 1,500 sites throughout the bay from December through March. Crabs tend to bury in the mud over the cold winter months, which makes it possible for scientists to develop accurate estimates of the number of crabs.

There are 455 million blue crabs in the Chesapeake Bay this year, according to the 2017 Blue Crab Winter Dredge Survey. That is down 17.7 percent from last year’s 553 million crabs, but is still the 11th highest level ever recorded 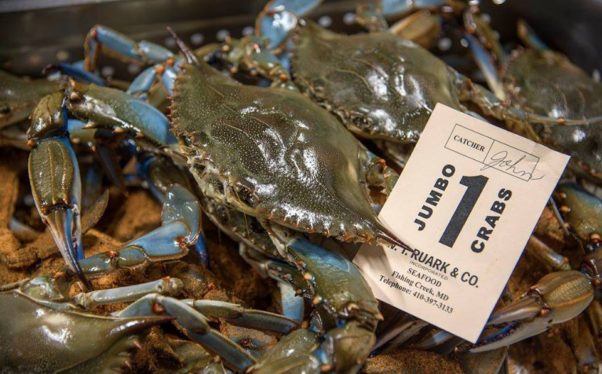 There are 455 million blue crabs in the Chesapeake Bay this year, according to state estimates. (Photo: Ivy City Smokehouse)

That is because tides and currents carried fewer larval crabs up the estuary. The number of adult male crabs fell 16 percent from 91 million to 76 million. However, juveniles dropped 54 percent from 271 million to 125 million, which is the fourth-lowest level on record.

“The total population is solid, such that we expect an ample harvest,” said VIMS professor Rom Lipcius. “The female spawning stock is above the stock-assessment target, which promises good recruitment of young crabs in the future, despite low recruitment this year.”

This year’s female spawning stock increased by 31 percent, from 194 million to 254 million crabs, which surpassed the target of 215 million and remains well above the minimum safe threshold of 70 million crabs.

“The results of the survey are a mixed bag,” said Chris Moore, senior scientist for the Chesapeake Bay Foundation, “but they show a continuing positive trend overall for the health of the Chesapeake Bay blue crab. Spawning age female crabs are at record levels, a sign that the Bay-wide management plan is working, but juvenile crab numbers fell well below average and adult males diminished.”

He said good crab harvests have been reported thus far this spring. “We hope those numbers hold. Considering the results of the survey, the late summer and fall harvests might not be quite so robust.” 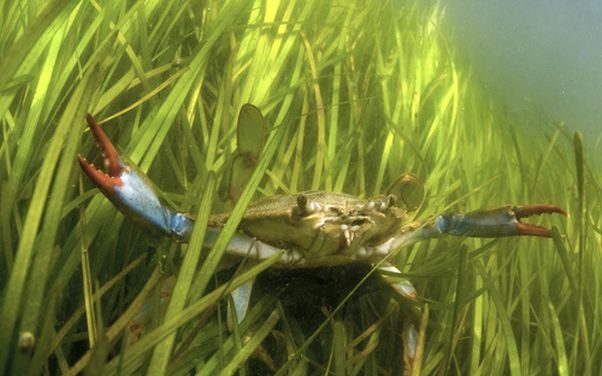 Blue crabs bury themselve in mud at the bottom of the bay over winter. (Photo: Jay Fleming)

“The low number of juveniles suggests we need to keep in place the suite of crab management regulations first agreed to in 2008 by Virginia and Maryland,” Moore said. “We also must maintain federal funding for critical crab management programs, such as underwater grasses restoration.”

Blue crab numbers are naturally prone to swings because of the species’ complex and short life cycle. After being spawned in Virginia bay waters, larval crabs spend the earliest stage of their life in the Atlantic. Wind and weather carry them up the bay to grow and spend the winter burrowed in mud. The following season, they emerge and resume growing, with an average life span of two years.