When chef Aulie Bunyarataphan and husband Mel Oursinsiri opened the original Bangkok Joe’s at 3000 K St. NW in Georgetown’s Washington Harbour in 2003, it was the first D.C. restaurant to have a dumpling bar serving the handmade Asian delicacies.

But when the lease was up in 2014 and they were required to refresh the restaurant, the pair, who also own T.H.A.I. in Shirlington and Tom Yum District in Rosslyn, enlisted Vucurevich Simons Advisory Group to give it a makeover as Mama Rouge, a French-Asian bistro. VSAG, which operates Founding Farmers and Farmers, Fishers, Bakers restaurants, managed and operated the restaurant using its own recipe’s and Bunyarataphan’s name.

However after struggling to find success, Bunyarataphan and Oursinsiri took control again and returned the restaurant to Bangkok Joe’s in April 2016 with an emphasis on traditional Thai ingredients, cooking styles and flavors.

“It was the biggest mistake we ever made,” Bunyarataphan said of the change to Mama Rouge. “It turned out we upset a lot of people. It was a big mistake changing to a new restaurant in the same location… I didn’t know [Bangkok Joe’s] had that much love until we closed it.” She added that Mama Rouge was too modern at a time when diners want traditional food. “The new Bangkok Joe’s is the restaurant I wanted to open 20 years ago. Over the past decade, we’ve seen customers become more adventurous and more willing to explore traditional Thai ingredients, flavors and cooking styles.”

While much of the interior remains from Mama Rouge, the biggest change is the stand-alone dumpling bar, which fills one wall of the restaurant and welcomes customers back. Expanded from the original Bangkok Joe’s dumpling bar, it now seats 10 diners. 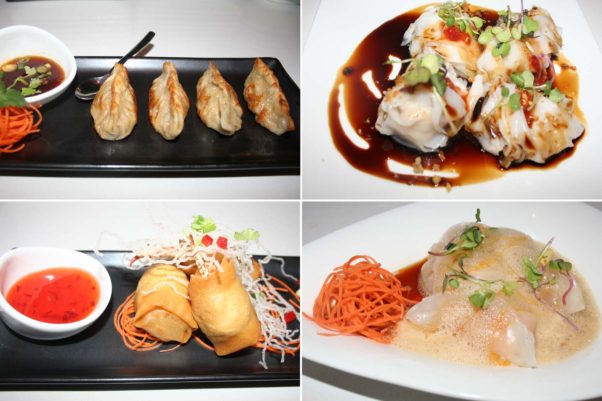 Call them what you want – potstickers, dim sum, gyoza, mandu, perogies or even ravioli, dumplings are small pieces of dough made from a variety of starches wrapped around a filling, according to Wikipedia. To perfect her dumpling presentation, Bunyarataphan studied with master chef Heng Pukdepl of Suan Lum Seafood, one of Bangkok’s most renowned dumpling houses.

Bangkok Joe’s offers about 20 kinds of dumplings, buns, wontons and rolls paired with house-made sauces. Prices run from $6.50-$12 for servings of two to four pieces and can be ordered at the dumpling bar or in the dining room.

Bunyarataphan said staff work all day long making the different kinds of dumplings, which she called “Chinese-influenced” because they aren’t traditional with thinner wrappers and different sauces. They come steamed, boiled, pan seared and fried.

Looking over the long list, deciding on which to order can be tough. Choices include larb duck with Thai herbs and crispy shallots served in a sweet-chili zaap sauce and lobster ‘n shrimp with water chestnuts, ginger-soy foam and chili oil. If you still can’t decide, there is a $21 sampler plate with a shrimp dumpling, pork ‘n crab shu mai, chicken potstickers, mushrooms ‘n ginger potstickers and winter squash potstickers.

On my recent visit, Bunyarataphan kept sending out plates until I couldn’t eat another bite. All were tasty, although I preferred the dumplings and rolls to the buns, which were too doughy for my taste. I also preferred the pan fried to steams or boiled, since I liked the slight crunch the pan frying gave the dumpling.

As for my favorite, I could only narrow it down to two: the winter squash potstickers made with butternut squash, sweet potatoes, onion and egg with a spicy ginger soy dip and the mushroom ‘n ginger dumplings with water chestnuts, carrots, scallions and a shitake-sesame cream sauce. The lobster ‘n shrimp was also delicious with its frothy ginger-soy foam as was the crispy crab finger roll with a shrimp and chicken mixture, shiitake mushrooms, carrot and bean threat noodles with a sweet chili dip and a crab claw in each bit that you used as a handle to eat with.

And save a little room for dessert. You can’t go wrong with the flambé Thai banana with minced ginger and orange peel, toasted coconut, sesame seeds and Grand Marnier sauce that the server will set aflame at your table and is served with coconut ice cream. Yum!