The Oscar Goes to…

The Oscar for Best Picture was so close for La La Land, but then Moonlight snatched it away, literally.

Just minutes after presenters Faye Dunaway and Warren Beatty announced that the musical La La Land had won the best picture Oscar at the 89th annual Academy Awards on Sunday, it was announced that they had somehow gotten Emma Stone’s Best Actress card instead of the right one, and it was in fact Moonlight that won the night’s big prize.

“There was a time when I thought this movie was impossible because I couldn’t bring it to fruition,” Moonlight director Barry Jenkins said while accepting the Oscar. “I couldn’t bring myself to tell another story, so everybody behind me on this stat said, ‘No, that is not acceptable.’”

After the show, PriceWaterhouseCoopers, the accounting firm that tallied the votes and guarded the winners list, said, “We sincerely apologize to Moonlight, La La Land, Warren Beatty, Faye Dunaway, and Oscar viewers for the error that was made during the award announcement for Best Picture. The presenters had mistakenly been given the wrong category envelope and when discovered, was immediately corrected. We are currently investigating how this could have happened, and deeply regret that this occurred.

“We appreciate the grace with which the nominees, the Academy, ABC and Jimmy Kimmel handled the situation.”

In all, Moonlight picked up three statues – including adapted screen play and supporting actor for Mahershala Ali – in the ceremony hosted by Kimmel, but La La Land did pretty well winning six Oscars, including best director for Damien Chazelle – the youngest person to win the category – and best actress from Emma Stone. Fences star Viola Davis and Manchester by the Sea star Casey Affleck picked up their first Oscars, for supporting actress and best actor respectively. 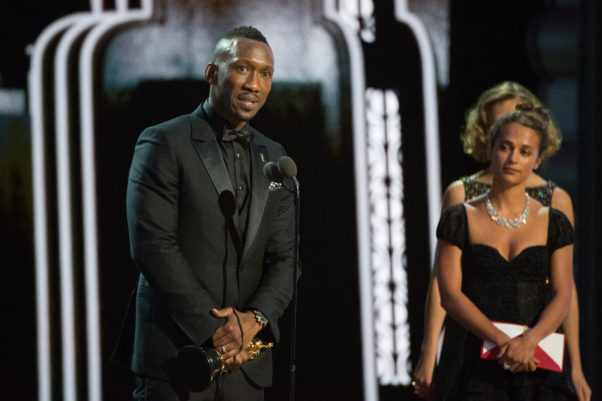 Mahershala Ali accepts the Oscar for Performance by an actor in a supporting role, for his performance in Moonlight.
(Photo: Phil McCarten/A.M.P.A.S.)

In his opening monologue, Kimmel skewered Donald Trump and the Academy’s record on diversity: “I want to say thank you to President Trump. I mean, remember last year when it seemed like the Oscars was racist?” He later took out his phone and tweeted “u up?” to the Twitter-addicted president.

In a sarcasm-filled speech, Kimmel, who was hosting for the first time, started by saying how he’d been told he needed to deliver a message of unity. “The country is divided right now. People have been telling me I need to say something to unite us. I’m not the man to unite this country,” he added, before delivering the only serious part of his monologue.

“There are millions and millions of people watching right now, and if every one of you took a minute to reach out to one person you disagree with and have a positive, considerate conversation – not as liberals or conservatives but as Americans – if we all did that it would make America great again. It starts with us.”

After his opening monologue, Kimmel continued to jab at Trump and his administration throughout the show. He referred to Ben Carson, Trump’s pick as secretary of housing and urban development, as Doctor Strange; he referenced the president’s obsession with “fake news” and joked that it was nice to have a president who believes in the arts and sciences while introducing Cheryl Boone Isaacs, president of the Academy of Motion Picture Arts and Sciences. Kimmel encouraged speeches that Trump “will tweet about in all caps during his 5 a.m. bowel movement tomorrow.”

The host also reignited his long-running fake feud with Matt Damon, which began with his exchanging of parody songs with the actor and Kimmel’s then girlfriend, Sarah Silverman, in the early 2000s.

Kimmel mocked Damon’s decision to give the lead role in Kenneth Lonergan’s Oscar-nominated Manchester By The Sea to Affleck. “He gave that role to his childhood friend Casey Affleck. He handed what turned out to be an Oscar caliber role over to his friend and made a Chinese ponytail movie instead, and that movie, The Great Wall, went on to lose $80 million.”

Kimmel also dedicated a section to Meryl Streep, calling her overrated and mimicking Trump’s criticism after the actor used a speech at the Golden Globe Awards in January to address the president.

Emma Stone accepts her Oscar for Performance by an actress in a leading role, for work on La La Land from Leonardo DiCaprio.
(Photo: Aaron Poole/A.M.P.A.S.)

Politics was a big part of the show, and not just in Kimmel’s jokes. There were many blue ACLU ribbons on tuxedos and gowns. Most notable was actor Gael Garcia Bernal’s simple declaration that “As a Mexican, as a Latin American, as a migrant worker, as a human being, I am against any form of wall that wants to separate us,” as he presented the Oscars for animated films.

Also, Iranian American astronaut Anousheh Ansari accepted the best foreign film Oscar, which awarded to Iranian director Asghar Farhadi, who skipped the ceremony as a statement against the White House’s attempt at an entry ban on residents of his country and six others. “Out of respect for the people of my country and those of six other nations” that have been “disrespected by the inhumane law that bans entry of immigrants to the U.S.,” he wrote. “Dividing the world into the us and our enemies categories creates fear.”

Below is the list of winners and nominees (winners are listed first in bold): 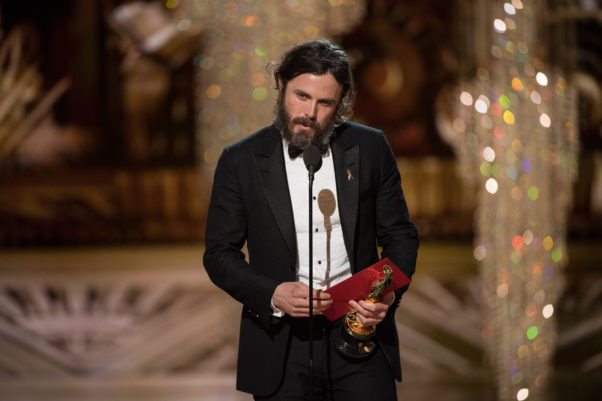 Casey Affleck accepts his Oscar for Performance by an Actor in a leading role, for work on Manchester by the Sea.
(Photo: Aaron Poole/A.M.P.A.S.)

Actor in a Leading Role

Actress in a Leading Role

Actor in a Supporting Role

Actress in a Supporting Role 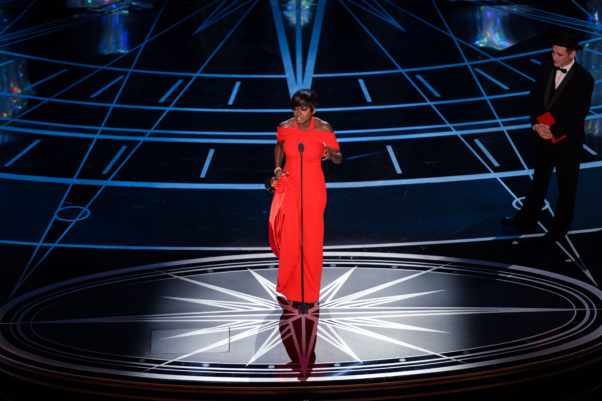 Viola Davis acceps her Oscar for Performance by an actress in a supporting role for her performance in Fences. (Photo: A.M.P.A.S.)

O.J.: Made in America
Fire at Sea
I Am Not Your Negro
Life, Animated
13th

City of Stars from La La Land
Audition (The Fools Who Dream) from La La Land
Can’t Stop the Feeling from Trolls
The Empty Chair from Jim: The James Foley Story
How Far I’ll Go from Moana