Several area restaurants will be closed Thursday, Feb. 16, in support of a “Day Without Immigrants,” a strike aimed as showing the contribution immigrants make to the area’s economy and protesting Donald Trump’s immigration policies. A similar protest was held in Milwaukee on Monday, when thousands of protesters marched through the city calling for an end to Trump’s immigration crackdown and a local sheriff’s support of the president. 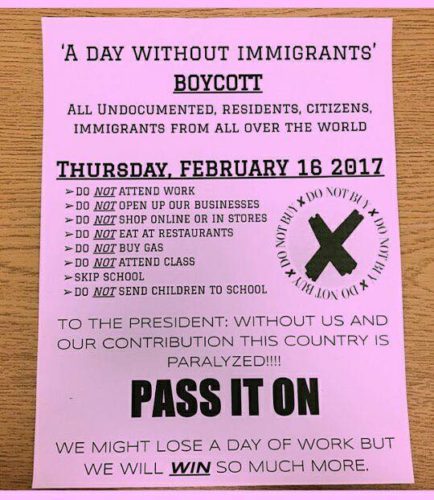 Many area restaurants will close or offer limited service Thursday in support of the Day Without Immigrants boycott. (Photo: Facebook)

The campaign, which calls for immigrants not to go to work, open their businesses, spend money or send their children to school, has spread through social media, flyers and word of mouth. It is unclear how many people will participate. The DMV had the seventh-largest immigrant population in the country, according to the Brookings Institution.

In support of our people & #ADayWithoutImmigrants Thurs 2/16 we will not open @jaleo DC CC MD, @zaytinya or @oyameldc #ImmigrantsFeedAmerica

José Andrés, who is a Spanish immigrant, announced on Twitter that Jaleo’s D.C., Crystal City and Bethesda locations will be closed along with Zaytinya and Oyamel. Andrés and chef Geoffrey Zakarian both pulled out of deals to open restaurants in D.C.’s Trump International Hotel in the Old Post Office after the then presidential candidate called undocumented Mexican immigrants “criminals” and rapists.” Andrés and Trump are in the middle of a court battle.

Restauranteur Andy Shallal, an Iraqi immigrant, is also closing his Busboys & Poets restaurants on Thursday to protest the president’s policies and plan to build a wall along the Mexican-U.S. border.

Other restaurants that will be closed include Brookland’s Finest, Bub & Pop’s, the Georgetown and Old Town locations of Pizzeria Paradiso. At Pizzeria Paradiso in Dupont, owner Ruth Gresser will man the oven.

Other restaurants will open, but with limited menus. Restaurants that stay open are preparing for limited deliveries, because many of the drivers are immigrants and expected to participate in the strike.

Meridian Pint, Smoke & Barrel and Brookland Pint will close their kitchens, but the bars will open. “As a Latino business owner I stand in solidarity with all of my immigrant staff. Therefore, we will close our kitchen this Thursday in support of our immigrant staff’s desire and right to protest the evolving state of immigration policies in our country. Our bars will remain open and our guests are welcome to BYOF (bring your own food),” wrote owner John Andrade on all three restaurants’ Facebook pages.

Compass Rose will be open, but with a limited staff. Everyone in the kitchen, except the chef and one line cook, is an immigrant and will be participating, according to owner Rose Previte. “We’re just going to go with what we have that day and tell customer, ‘This is what happens when immigrants don’t come to work.’”

Bar Pilar will also remain open with a skeleton crew, according to chef Jesse Miller. He, along with some friends, will be offering limited Latin American dishes instead of the regular menu.

At Boundary Stone, owners Colin McDonough and Gareth Croke will man the kitchen from 5-9 p.m. while their employees participate. “It will be a very limited menu because we are not as talented as the people who normally work here,” he told The Washington Post. The restaurant’s employees who participate in the boycott will be paid. “We just got together and decided together as a team that it was a good idea on our part to give our team off to voice their concerns.”

Restaurants aren’t the only businesses joining in. Tacoma-based Accounting and Consulting Resources posted a message on their website: “We believe immigrants make America! Therefore, we will be closed on February 16, 2017 in support of A Day without Immigrants. We will reopen on Friday February 17, 2017.”

LAMB Public Charter School will also be closed because staff members and students will be protesting.

Open, but with changes

If your restaurant or bar will be closed Thursday or have limited service, please email dcoheditor (at) gmail (dot) com and we will add you to the list.