Clyde’s Is Closing in Tysons on Feb.5

The 36-year-old Clyde’s of Tysons Corner, 8332 Leesburg Pike, Vienna, will close on Feb. 5 to make way for a new 5.79 acre, 2 million-square-foot Tysons Corner project. It is adjacent to the Greensboro station on the Silver Line.

The Tysons Corner restaurant opened in 1980, the first Virginia location opened by the D.C.-based Clyde’s Restaurant Group, which owns nine other Clyde’s locations in the DMV. The restaurant has four dining rooms and two kitchens.

“It was a difficult day for us,” Tom Meyer, president of Clyde’s Restaurant Group, said in a statement. “The right decision is often the hardest.”

It will be replaced by the $750 million Tysons Central project led by NV Commercial Inc. and Clyde’s Real Estate Group Inc. It will feature six new buildings constructed atop a single parking structure with a mix of office, retail and residential space. The property is currently developed with retail, including Clyde’s, and surface parking lots. Clyde’s, which owns a significant chunk of the nearly 6-acre site, is marketing its parcels for sale.

Clyde’s has expressed an interest in returning to the new development on the ground floor of one of the new buildings.

Employees at Tysons will be offered employment at other Clyde’s locations in the DMV.

Bonfire, the fire-themed restaurant at 1132 19th St. NW, closed yesterday after less than a year in business. 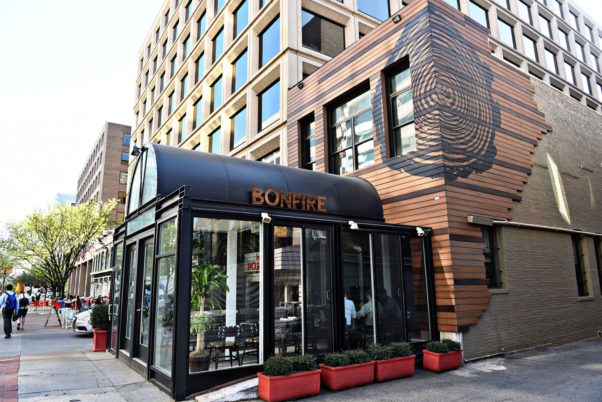 Mike Bramson, a principal with owner Social Restaurant Group, said the restaurant couldn’t reach a lease agreement with its new landlord, The Goldberg Group of White Plains, N.Y., which purchased the building last May.

“While Bonfire was extremely popular with the neighborhood and we had a very loyal customer base, unfortunately we couldn’t come to a mutually beneficial lease agreement with the new landlord and have decided to go our separate ways and close the restaurant with hopes of finding a new space to reopen the same or a similar concept in the future,” Bramson said in a statement.

But the restaurant had a rocky start last May including a dispute with opening chef R.L. Boyd, which saw him leave after only two months.

Bonfire is the latest in a string of closures along 19th Street NW in the past year. It’s location previously was home to Famous Luigi’s pizza. Smith & Wollensky steakhouse closed in March as did Protein Bar at 19th and K, Sophie’s Cuban and Science Club. Olivia’s Diner closed in May and 19th Street Burger Bar, Red Robin’s fast-casual burger joint, closed in October.

Social Restaurant Group also owns Provision No. 14 and The Prospect in D.C., and Pamplona in Clarendon.

Executive chef Kwame Onwuachi in front of the pricey Shaw Bijuou restaurant, whcih charged nearly $1,000 for dinner for two and closed lest than 2 1/2 months after opening. (Photo: Aaron Lyle)

At the beginning of the year, the restaurant pared its 13-course, $185 menu – add alcohol, tax and tip and the price reached nearly $1,000 for two — to seven courses for $95 after less than two months. Chef Kwame Onwuachi posted on Instagram that the restaurant “adjusted our concept with the people of D.C. in mind. In order to continue to invite and welcome people into our home, The Shaw Bijou, will now only offer a 7 course-tasting menu, which includes a welcome cocktail, for 95 dollars beginning Tuesday, January 3.”

Onwuachi was a young chef who hadn’t proven himself. While the 27-year-old gained fame on the 13th season of Top Chef where he finished sixth out of 17, this was his first time to run a restaurant or manage a kitchen as executive chef. The reviews weren’t good — either of the food or the atmosphere.

On Jan. 15, co-owner Kelly Gorsuch closed the restaurant. “It just became to costly with labor and the quality of the ingredients, and unfortunately, if you can’t cut those two things down, it’s usually the end of the business,” he told the Washingtonian magazine. “It just didn’t seem to be a viable business really. The concept was good, we just weren’t able to execute it.

Gorsuch said he tried to convince Onwuachi and general manager Greg Vakiner to change the concept, but to no avail. “If we would have done what people loved, it would have been a different story… I think wit too long to start listening to the guests.”

After suing its lender in D.C. Superior Court for “predatory lending and “deceptive practices”, the Florida Avenue Grill, 1100 Florida Ave. NW, was able to fend off a foreclosure auction scheduled for Jan. 18. 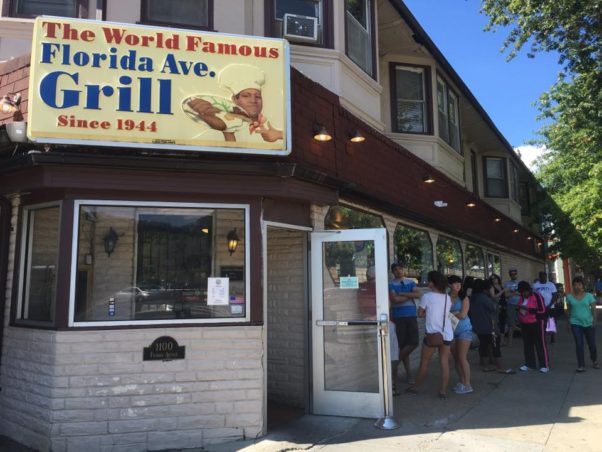 Hutchins alleged that, starting in summer 2015, ATS began returning the restaurant’s monthly mortgage checks as “undeliverable,” even after Hutchins and his attorney inquired about the lender’s apparent and unannounced change of address. The lender allegedly didn’t provide the oldest, continuously operating soul food restaurant in America with a new mailing address.

Instead, in January 2016, ATS used the “alleged nonpayment of the mortgages as a pretext for declaring a default and very aggressively threatening foreclosure,” the lawsuit said.

Hutchins claims to have offered ATS a check for $23,555.30, the total amount of the missing monthly payments, but ATS refused the money and threatened “legal measures in an attempt to get Plaintiffs to agree to pay off the mortgages early.”

At that point, according to the complaint, Hutchins started sending a certified check each month to a new ATS address. Those uncashed checks were returned to Hutchins’ attorney in December, according to the complaint. The letter informed Hutchins that his “partial payments” had been rejected, the lawsuit alleged, and that ATS was initiating a foreclosure proceeding against the restaurant.

Despite reaching a settlement with ATS, the restaurant said in a Facebook post that it incurred “tens of thousands of dollars in legal fees and accelerated our mortgage to a payoff in a year. We settled because the reality is that, even though we are right, we are not in a position to fund skyrocketing legal costs and survive a long court battle with a lender at litigious and deep-pocketed as theirs.”

A customer and former ANC commissioner, Mark Ranselm, stated a GoFundMe campaign called Love the Grill to help raise funds. As of Monday morning, the campaign has raised $6,775 toward its $30,000 goat in seven days. Anything raised over the $30,000 will go towards paying off the mortgage, according to the page.

Diners will receive a carafe of freshly squeezed orange juice and a bottle of sparkling wine to create their own “tabletop” mimosas for $22. Also available at brunch are aperitifs including a Kir Royal-Blanc de Blancs Brut NV mixed with a choice of crème de cassis, crème de mûre or crème de pêche; Bastille’s Spicy Mary made with tomato juice, Siracha, cayenne and lime; Parisian Morning with orange juice, Aperol and sparkling wine; and the Dirty Mary with tomato juice, horseradish, olive juice and black pepper.

Most recently, Levin was the pastry chef at Osteria Morini. In his new, he will oversee pastry programs from diverse cuisines at American, Greek, Italian, Latin American and Spanish-inspired restaurants.

“Alex brings much more than just the ability to spin sugar into something magical and delicious; he brings a keen sense of hospitality, professionalism, care for his community and real business acumen,” Michael Schlow said. “This rare combination is what makes Alex a special addition to our team and I’m excited for the rest of the country to find out what I’ve known for years – that Alex is a real star in the making.”

Levin joins a team of chefs and will work with each to build upon the unique dessert menus at each SRG restaurant. Named best Pastry Chef by the Restaurant Association Metropolitan Washington in 2016, Levin moved to Washington, DC in 2013. He is a graduate of Yale and the Culinary Institute of America, Hyde Park.

Previously, he has worked at Jean Georges, Cafe Boulud and the Apple Pie Bakery Café in New York City.