Hidden Figures Blasts Off with $22.8 Million

On Sunday, 20th Century Fox’s Hidden Figures was projected to finish second, but when the weekend actuals were released on Monday, the movie finished in first place with a $22.80 million wide-release debut. The film held on much better on Sunday than anticipated, with Fox originally forecasting a $5.32 million Sunday, while it occasionally overshot that estimate by more than $1 million with $6.34 million, dethroning Walt Disney Studios’ Rogue One: A Star Wars Story, which was in first for three consecutive weekends. 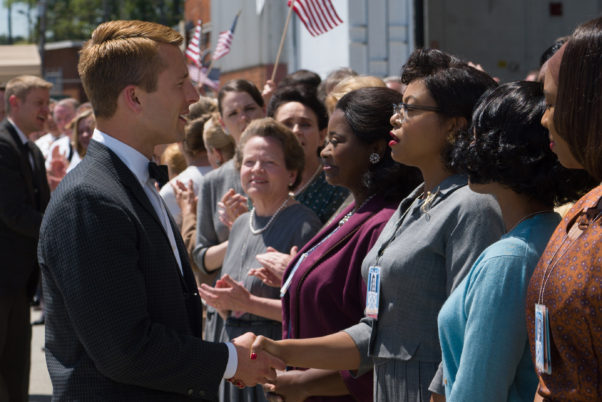 Hidden Figures made its wide release debut in first place with $22.8 million over the weekend. (Photo: Hopper Stone/20th Century Fox)

Hidden Figures, which stars Taraji P. Henson, Octavia Spencer and Janelle Monae, is the true story of three African American women who overcame racism and sexism to become key mathematicians and engineers for NASA’s 1960s missions. After playing the previous two weekends in limited release, the film expanded into wide release last weekend (Jan. 6-8). Helping the word of mouth were great reviews and rising Oscar buzz. Online odds predict the film will receive a Best Picture nomination as well as a Best Supporting Actress nomination for Spencer, neither of which were expected a few weeks ago. The film has grossed $25.75 million so far.

Rogue One finished in second with $22.06 million, down 55.5 percent from the 3-day New Year’s weekend. That was the sharpest decline among any film in the weekend’s Top 10. It was not able to hang on at the top as long as previous installment Star Wars: The Force Awakens, which spent an impressive four consecutive weekends atop the box office in 2015-16.

With $477.36 million total through 24 days, Rogue One is running 8.5 percent ahead of the $439.94 million inflation-adjusted total of 2005’s Star Wars: Episode III – Revenge of the Sith and 41.3 percent behind the record-breaking $812.73 million that The Force Awakens had earned through the same period. Rogue One is also only $9.0 million away from overtaking the final gross of Finding Dory to become the highest-grossing release from 2016.

Coming in third place with $20.71 million was Universal Pictures’ Sing, which some had projected could even come in first place. After all, last weekend it came in second place with a weekend-over-weekend increase, while Rogue One came in first place with a decline. If similar numbers had continued into this weekend, with Sing experiencing a mild decline, it could have taken the crown — but instead it fell 51.7 percent.

A disappointing fourth place went to Sony Pictures/Screen Gems’ sci-fi action sequel Underworld: Blood Wars with $13.69 million. Starring Kate Beckinsale, the title was the fifth installment in the series, which dates back to 2003 — and possibly the last installment, considering it posted the lowest inflation-adjusted opening weekend and appears more than likely to notch the lowest cumulative total as well. It is also the only installment to debut lower than second place.

Blood Wars starts 34.2 percent behind the series’ next-lowest opening, 2009’s Rise of the Lycans with $20.82 million. It is also the lowest grossing of the four previous installments with $45.80 million, a figure that Blood Wars seems similarly unlikely to reach or even approach. Yet with a production budget half of the franchise’s previous installment, 2012’s Awakening, the film could still potentially turn a profit after all. With several other sci-fi or action films such as Sleepless, xXx, The Return of Xander Cage and Resident Evil: The Final Chapter coming out over the next few weekends, expect Blood Wars to fade quickly.

Rounding out the top five was Lionsgate’s La La Land with $10.13 million. It was the Best Picture frontrunner’s first weekend playing on more than 1,000 screens nationwide, more than doubling its theater count from last weekend to 1,515 screens from 750. It also finally cracked the top five in weekend rank, after coming in seventh, eighth and seventh the previous three weekends. The only possible negative here is that its box office only improved 6.1 percent despite more than doubling its theater count. The movie has now earned $51.79 million to date.

Focus Features’ fantasy A Monster Calls debuted in a 12th place with $2.08 million. While not a big surprise given its very meager $9,567 and $7,515 per-screen averages in limited release the previous two weekends, it should still be considered a disappointment for Focus.

In limited release, Weinstein Company’s Lion earned $2.07 million, down 9 percent. Fox Searchlight’s Jackie added $1.05 million, down 33 percent. And Silence expanded from four to 51 theaters — ahead of a yet-wider expansion to about 750 screens next weekend — with $482,034.