There wasn’t any movement in the top three movies over New Year’s weekend (Dec. 30-Jan. 2), although there was much movement on the lower end with Fantastic Beasts and Where to Find Them and Manchester By the Sea returning to the Top 10 at ninth and 10th places respectively. However, it was another good weekend for Walt Disney Studios’ Rogue One: A Star Wars Story, as it added $65.52 million over the four-day weekend ($49.61 million over the traditional 3-day weekend). 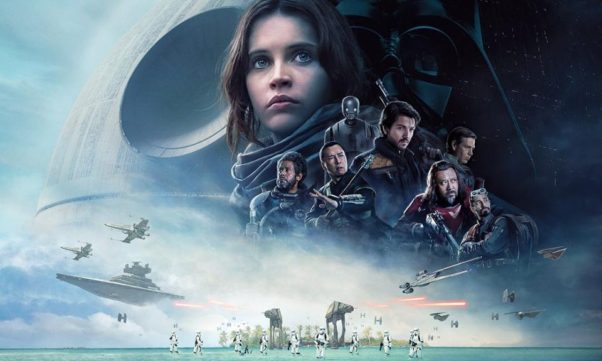 Rogue One: A Star Wars Story remained on top New Year’s weekend with $65.52 million and could become the highest grossing release of 2016. (Photo: Lucasfilm)

With $440.90 million total, Rogue One is on track to become the highest-grossing release of 2016. Over the weekend, it cracked the inflation-adjusted top 100 highest grossing films of all time in only its third weekend, currently ranking at Number 98. It seems sure to overtake Finding Dory as the highest-grossing film released in 2016 domestically, potentially overtaking Finding Dory‘s $486.29 million gross, possibly this coming weekend. Whether Star Wars actor Carrie Fisher’s death last week prompted audiences to see Rogue One — in which Fisher does not appear in person — is unclear.

Universal Pictures’ animated Sing took silver for the second consecutive weekend, but by a much narrower margin, as it earned $57.29 million ($42.90 three-day). After coming in second the previous weekend as well, Sing closes the gap with a 4.2 percent increase 4-day to 4-day compared to Rogue One’s 3.2 percent drop.. If Sing continues to hold on that well while Rogue One drops, Sing might even lead the box office next weekend, its third weekend. It is very rare for a film to rise to the top spot instead of debuting there. Sing has earned $180.89 million so far.

Sony Pictures’ sci-fi romance Passengers came in third with $21.07 million 4-day ($16.16 million 3-day), for a 7.1 percent 4-day to 4-day drop. The film held on better than some expected given its lackluster reviews and the expectation that a blockbuster co-starring Jennifer Lawrence and Chris Pratt might burst out of the gate with more frontloaded numbers. The film has earned $66.18 million to date.

With no new releases this weekend, the top three films at the box office remained the same as last weekend, but fourth place was a pleasant surprise for Disney, as Moana climbed from sixth place the previous weekend. With $15.20 million over the 4-day weekend ($10.99 million 3-day). The film reverses its downward drop in the box office rankings thanks to a 21.1 percent improvement 4-day to 4-day. With $214.26 million so far, the film might remain in the Top 10 throughout January.

Twentieth Century Fox’s Why Him? rounded out the top five with $13.12 million for the four days ($10.05 million 3-day). The R-rated comedy starring James Franco and Bryan Cranston fell 15.6 percent 4-day to 4-day, but is experiencing much better holds than other holiday releases like Assassin’s Creed or Collateral Beauty, which dropped to eighth and 11th places respectively.

Lionsgate’s La La Land continued to stun with a seventh-place finish over the 4-day weekend, despite playing in far fewer theaters than any other film in the top 10, as it continues its expansion rollout. On only 750 screens nationwide, the film earned $12.48 million for the four days ($9.53 million 3-day), an increase of 36.1 percent 4-day to 4-day. With $37.29 million earned so far, it could exceed industry expectations of how much any film could earn while playing in less than a thousand theaters.