A Sacramento State sociologist believes that clues to the continued dominance of men in the STEM (science, technology, engineering, and mathematics) fields – and the reason nurturing often comes more easily to women – can be found in the children’s toy department. 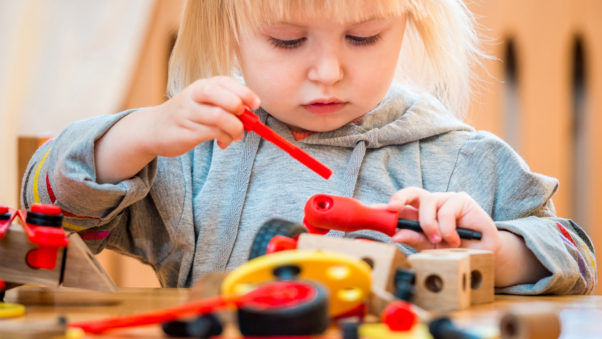 “If kids aren’t exposed to the kinds of toys and play that help them develop those skills, they may not be as good at them over time. But even more insidious is that it reinforces the stereotype that boys are good at science and math, and girls are not. It pushes women and girls out of that field, because they think it’s not for them.”

Some toy manufacturers have proposed making STEM toys pink to appeal to girls. “I think that’s the wrong approach,” Sweet says. “I think that plays up the stereotype that girls are so different that they need a special kind of STEM toys.” 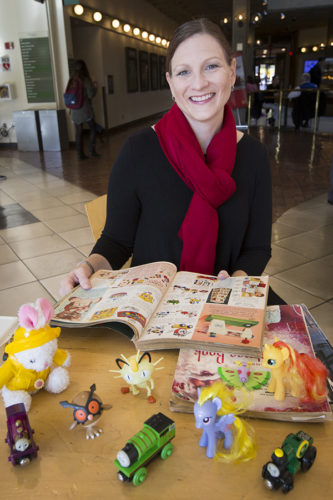 There are a lot of gender and racial stereotypes at the core of children’s toys today, and that affects children on a couple of different levels,” says lecturer Elizabeth Sweet. (Jessica Vernone/Sacramento State)

Sweet, an expert on gender and diversity in children’s toys, presented her research last spring at a White House conference titled “Breaking Down Gender Stereotypes in Media and Toys So That Our Children Can Explore, Learn, and Dream Without Limits.” She and other scholars discussed childhood and adolescence in relation to media and toys. Representatives from such toy manufacturers as Lego, Mattel, Disney and DC Warner talked about what they’re doing to address gender and racial stereotypes.

“Everybody was committed to the idea that something needs to change, recognizing there’s a real problem here,” said Sweet. “There are a lot of gender and racial stereotypes at the core of children’s toys in the media today, and that affects children on a couple of different levels.

“Research shows that different kinds of toys help children to develop different kinds of skills. For instance,” she said, “building blocks are great for building spatial skills. Playing with dolls is really good for developing language skills and nurturing abilities. All of those skills are essential for a fully functioning human.”

Sweet recently was interviewed by the Associated Press for a story about how some toy companies are offering more inclusive playthings for the 2016 holiday season, including dolls with disabilities, female superhero figures and characters with a range of skin tones. “There’s been some good progress, but there is a lot of work that needs to be done. Kids need to see themselves in the toys and objects that they interact with,” she said.

Her advice for parents, grandparents and others shopping for toys this holiday is first to consider the child’s interests. “Don’t go first to the idea that this is a girl, so she must want a princess doll,” Sweet said. “Play helps children to develop necessary skills and to learn and grow in their world, so the toys that allow for the most open-ended and creative play are those that research has found are best. And I don’t recommend that parents limit the possibilities.”

Sweet began her research with a stack of Sears catalogs – some found online, others purchased from eBay, and one rescued from her grandparents’ Ohio farmhouse – to see how toys were marketed throughout the 20th century. In the early 1900s, before women won the right to vote, toys rarely were identified as being specifically for boys or girls. “At the time when there were huge gender distinctions among adults, there was very little gendering in the advertisements,” she said. “In the quarter- to mid-century, toys become more gendered, and then became less gendered into the 1970s. And then they begin to become more gendered again.”

As a girl growing up in the late 1970s, she played with Star Wars action figures alongside boys. “Granted, all of us girls were some version of Princess Leia, but I don’t remember feeling that Star Wars was a boys’ property.”

And now, as the U.S. moves closer to achieving gender equality, she said, most toymakers still are headed in the opposite direction. “When you go into a toy store today, everything is pink and blue, and that is really different from what I remember as a child of the 1970s and ’80s,” she said. “So I was interested to study what, sociologically, has changed over time, and why.”