Dave & Buster’s returns to Montgomery County at 11 a.m. Monday, Nov. 21, when its newest location opens at 8661 Colesville Road, Silver Spring in space formerly occupied by an AMC theater. It is the third Dave & Buster’s in Maryland – there are also locations at Arundel Mills in Hanover and at Ritchie Station Marketplace in Capitol Heights. 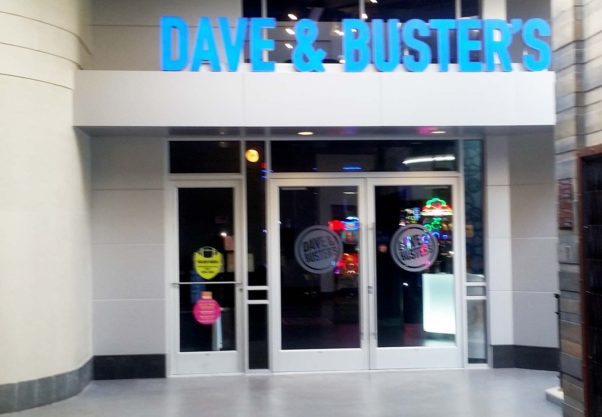 The 40,000-squre-foot arcade and restaurant is on the top floor of Ellsworth Place – formerly City Place Mall, which has been undergoing renovations for the last four years. It marks the company’s return to Montgomery County following the closure of its White Flint Mall location in 2014. In addition to the arcade, the mall has added stores including T.J. Maxx, Ross, Forever 21 Red, Michael’s and the restaurant Not Your Average Joe’s.

General manager Andy Smith said that the lease with White Flint prohibited the company from expanding within a certain radius, so other area locations like Springfield Town Center were not possible before. He added more locations are planned for the DMV since that lease was broken when the mall closed. 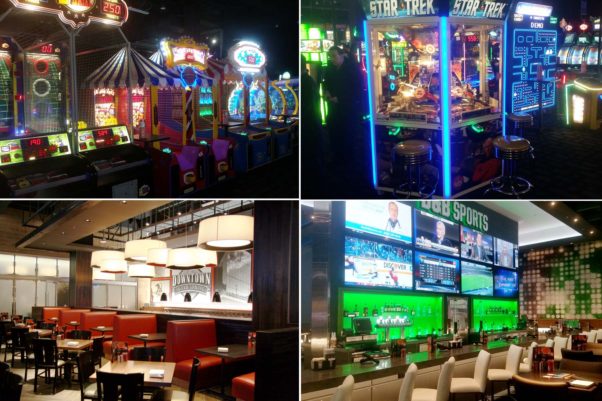 Dave & Buster’s in Silver Spring includes a carnival-style midway (clockwise from top left), a Star Trek game found only at the chain, a sports bar with large HDTVs and a dining room with local art. (Photos: Mark Heckathorn/DC on Heels)

The Silver Spring location is between the much larger Arundel Mills location and the smaller Springfield outlet. It features more than 160 games – some like Star Trek that are exclusive to Dave & Buster’s, along with a virtual Star Wars battle pod, Mario Kart Grand Prix, Jurassic Park and Ghostbusters. There are also classic games like skee ball, air hockey, Super Shot basketball and “the world’s largest” Pac-Man game. Some games reward players with tickets that they can redeem for prizes ranging from small trinkets and stuffed animals to an Xbox One, PlayStation 4 or an iPad. There are also plenty of places to “power up” or add money to the cards customers us to play the games.

The sports bar features 35 HDTVs, some more than 100 inches wide, which will show Washington sports teams’ games as well as every NFL football game. They will also show Discovery channel programming, which is headquartered just blocks away in downtown. The oval bar also has views of the arcade and there is a more secluded dining room for quieter meals. There are also three private rooms that can be rented for special events such as birthday parties or business meetings. The restaurant features local photographs including several of the monuments in the private rooms and a collage of scenes from Silver Spring in the main dining room. 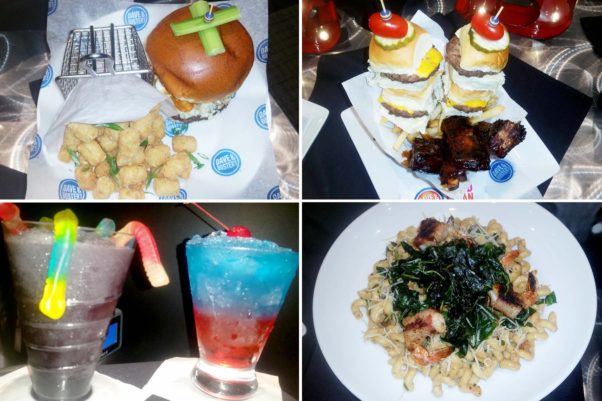 The bar offers about a dozen beers on tap and more in bottles or cans including local craft beers, a small selection of wine and a range of cocktails such as Coronaritas, margaritas with a mini bottle of Corona upended in it, adult snow cones and glow cones, adult snow cones with a light up ice cube inside.

Dave & Buster’s is open from 11 a.m.-midnight Sunday through Thursday and 11 a.m.-2 a.m. Friday and Saturday. It will be open Thanksgiving Day from 4 p.m.-midnight.