Walt Disney Studios’ superhero fantasy Doctor Strange and 20th Century Fox/DreamWorks’ Trolls held onto their first and second place status last weekend (Nov. 11-13). The former fell 49.5 percent to $42.97 million, while the latter dropped 24.9 percent, but still came in the runner-up with $39.98 million. Paramount Pictures’ science-fiction drama Arrival was the weekend’s top new debut with $24.07 million for third place. And Universal Pictures’ holiday comedy Almost Christmas started in fourth place with $15.13 million, although it may hold up well as the Yuletide approaches. 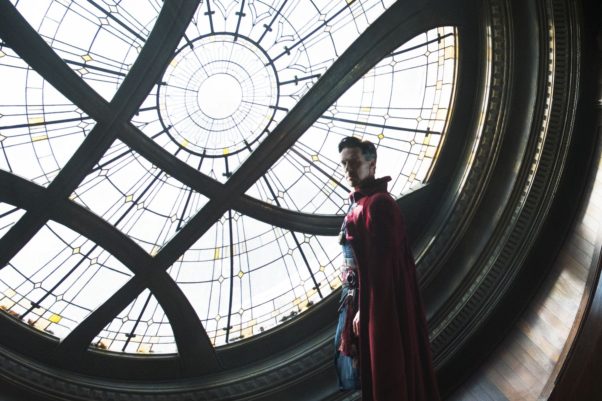 Doctor Strange held on to its top spot at the box office last weekend with $42.97 millon, but is expected to fall next weekend with the opening of Fantistic Beasts and Where to Find Them.(Photo: Jay Maidment/Marvel)

Doctor Strange has earned $152.95 million through two weekends. The Harry Potter spinoff Fantastic Beasts and Where to Find Them premieres this Friday and will almost certainly end Doctor Strange’s first-place hold. But Doctor Strange has lifted distributor Disney to new heights, as the studio broke its previous annual box office record by taking in $2.31 billion this year domestically, beating last year’s total of $2.28 billion. The studio has been posting the best box office results this year, at more than $600 million ahead of its nearest competitor Warner Bros. Pictures.

The animated Trolls has earned $93.94 million through two weekends. With no animated competition until Disney’s animated musical Moana opens in two weekends, Trolls seems likely to experience another mild drop next weekend as well.

Arrival, starring Amy Adams, Jeremy Renner and Forest Whitaker, rode on the strength of its incredibly positive reviews. In fourth place was Almost Christmas. It is the first of three wide release Christmas-themed films to open this holiday season. How will the film hold up over the next month and a half? That depends in part on how its competitors Office Christmas Party and Bad Santa 2 perform, but a fourth-place start is not the most encouraging sign.

EuropaCorp’s horror thriller Shut In starring Naomi Watts debuted with $3.50 million opening in eighth place. Playing in 2,058 theaters, that ranks among the worst openings ever for a movie playing on 2,000 or more screens, coming in the bottom 30 films of all time adjusted for inflation. Several of the other films ranking below it were fellow 2016 releases including September’s The Wild Life, March’s The Brothers Grimsby, October’s Max Steel and September’s Morgan.

A24’s independent release Moonlight continued to impress at the box office, more than doubling its theater count last weekend and taking in $1.27 million. Having already posted the best per-theater average of the year during its opening weekend last month, if the film keeps expanding in weekends to come it could surprise everybody with its cumulative gross, which currently stands at $4.68 million to date.