We tend to think of energy drinks as an innovation of the late-20th Century, but of course they have been around longer than that. When Confederate Col. John Pemberton devised a cocktail to ease his morphine addiction, his two key ingredients were coca leaves, the source of cocaine, and Kola nuts, a source of caffeine. This popular beverage was of course Coca-Cola, from which the cocaine content was discontinued in 1904.

In 1929, the Lucozade brand was marketed in the United Kingdom as an aid to recovery. It was subsequently remarketed as an energy drink in the ’80s. The first drink specifically designed as an energy drink was the Japanese product Lipvitan D, but this was marketed in small brown bottles as a tonic rather than as a lifestyle drink. It’s basic formula, with the addition of caffeine and sugar, was replicated by Red Bull in the ’80s and the rest is history.

Worldwide sales of energy drinks are now somewhere in excess of $20 billion. A previous article on this site discussed the growing medical evidence that these drinks can pose serious health problems and “could predispose an increased risk of cardiac events – even in healthy people.” Despite the prevalence of their use, we are only just starting to understand the long-term health implications. 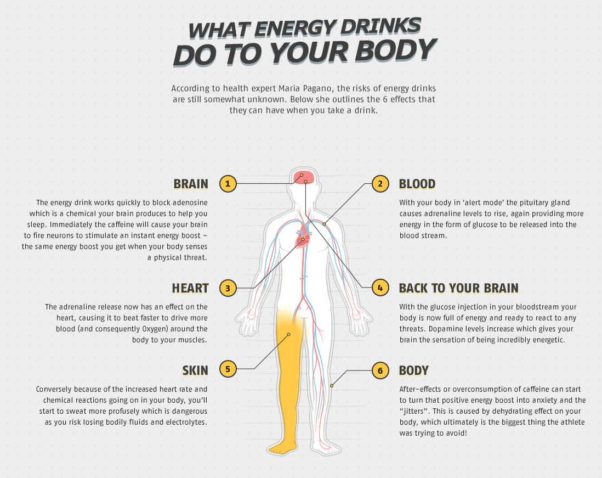 This infographic highlights the effects energy drinks have on our body (Image: bwin)

The staple ingredient of most energy drinks is caffeine, the most widely used drug in the world. A typical cup of coffee contains about 150 mg of caffeine. Some energy drinks contain as much as 500 mg of caffeine, making their consumption the equivalent of drinking about 14 cans of soda at once. Caffeine causes your brain to fire neurons, which gives you an immediate energy boost. It stimulates the pituitary gland, which causes an increase in adrenaline. As a consequence, the heart begins to beat faster and more blood is pumped around the body.

Side effects can be wide ranging, including heart palpitations, gastrointestinal upset, chest pains, insomnia, respiratory problems and headaches. For athletes, energy drinks do provide short-term bursts of energy, but the detrimental side effects and the dehydration that caffeine causes are likely, in the longer term, to impede performance. The real concern lies in the consumption of these drinks by young people. For teenagers, energy drinks are a legal drug that they can abuse without restraint. They can stay awake late into the night playing video games because they are wired on energy drinks and in the morning, they can get themselves to school with the aid of another energy drink; the consequences for their health and behaviour are likely to be catastrophic.

The consumption of energy drinks has also been shown to increase the likelihood of risk taking behavior in adolescents. And when energy drinks are take in combination with alcohol, the consequences can be very serious, even fatal. “In a 2014 study the American Heart Association tracked the U.S, Poison Control Centers and discovered more than 40 percent of the 5,156 calls about energy drinks involved children younger than six.” Energy drinks continue to be freely available to people under 18, the long-term health consequences of their use remain to be seen.