On Rye Opens Friday in Chinatown

“We’re thrilled to open our permanent location, particularly given the great response we’ve had to our stand at Nationals Park,” Lerner said in a press release. “Our goal is to change the perception of Jewish sandwiches and other deli items as ‘heavy, special occasion food’ to everyday fare that you can eat several times a week, while still maintaining a connection to the comfort and tradition of the cuisine.”

Designed by D.C.’s HapstakDemetriou, the interior has a classic black and white color palette with black steel and brass elements, tile inlays and polished concrete floors. Coffeehouse-style seating in the front and more traditional seats in back are separated by a low wall, while shelves along the side wall display cookbooks, pantry ingredients and other chotskies. 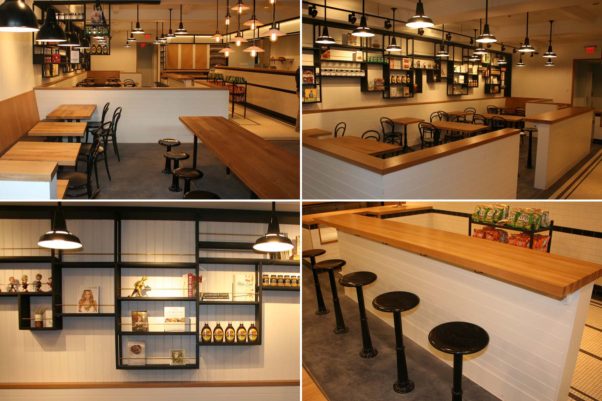 The interior of On Rye includes counter seating in front and traditional tables in back along with a wall of cookbooks, Dr. Brown’s Soda, Fox’s U-Bet chocolate syrup and chotskies. (Photos: Mark Heckathorn/DC on Heels)

You won’t find bubbe’s recipes on the menu, but the classics with an updated spin. On Rye’s menu focuses on traditional Jewish deli sandwiches and other dishes made with fresh ingredients and modern, more health-conscious cooking techniques to reduce salt content without sacrificing flavor. Of the 10 sandwiches on the menu, half are vegetarian or can easily be made meat-free. Sandwiches and salads range from $8-$12.

A riff on the classic pastrami on rye sandwich features a choice of Wagyu corned beef, Wagyu pastrami or roasted turkey breast cooked sous vide – in a water bath to reduce salt — served with spicy mustard on marbled rye bread from Uptown Bakers in Hyattsville. Reubens abound — not only are the traditional sandwich, but a variety of vegetarian options will rotate seasonally. On the opening menu are both a smoked beet version as well as a charred broccoli and roasted Portobello mushroom cap one, in addition to a variety of seasonal salads. No fries, but there are both traditional potato latkes served with sour cream and apple sauce and oven-baked rutabaga and broccoli latkes served with a yogurt lemon sauce. There’s also matzo ball soup and salads including a Chinatown chicken salad with mandarin orange slices, crispy wontons, scallions and an orange sesame dressing. 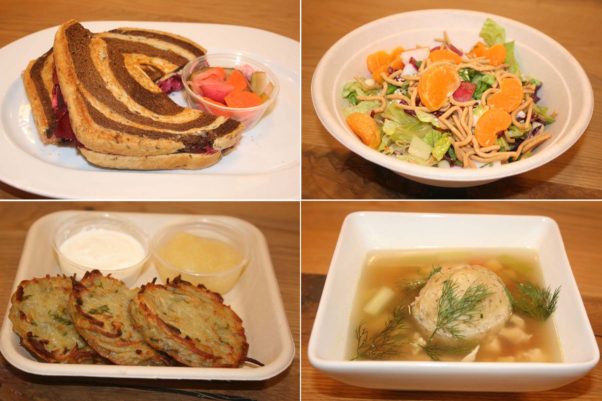 On the sweet side, there are bubka ice cream sandwiches, a scoop of Dolci Gelati vanilla bean gelato sandwiched between two slices of chocolate bubka from Green’s & Ackerman’s Bakery in Brooklyn just like Jerry and Elaine tried to get for a dinner party. Other options include black and white cookies and babka French toast.

On Rye will also serve egg creams, a frothy beverage made with Fox’s U-Bet chocolate syrup, milk and seltzer, Dr. Brown’s soda by the can and Boylan’s sodas from the fountain. Canned wine and beers, and Stumptown coffee round out the beverage offerings.

As for returning to Nationals Park next year, Lerner says it is to early to say since the season just recently ended, but she was very pleased with the stand and would be willing to go back if the stadium will have her.