Madea Snuffs Out Inferno in Theaters 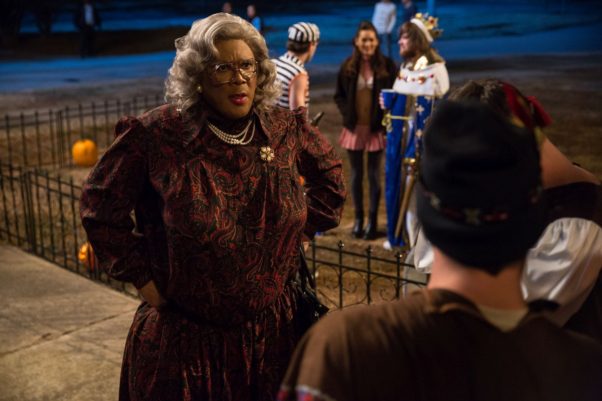 Tyler Perry’s Boo! A Madea Halloween beat out Inferno in theaters over the weekend with a $17.22 million take.
(Photo: Eli Jacobs/Lionsgate)

The World Series and early Halloween festivities might have scared away business last weekend, giving Boo! A Madea Halloween the chance to repeat as the top film in North America. A slight bump in locations lifted the comedy to an early $52.56 million domestic total. All seven films in Tyler Perry’s Madea franchise have grossed more than $50 million in North America, led by 2009’s Madea Goes to Jail with $90.5 million.

Inferno’s second place debut was substantially behind the opening weekends of predecessors in the series adapted from Dan Brown’s best-selling novels: The Da Vinci Code started with $77.0 million 2006 – about $101.3 million adjusted for ticket price inflation — and Angels & Demons opened with $46.2 million in 2009 — about $53.3 million adjusted for inflation.

Paramount Pictures’ Jack Reacher: Never Go Back sputtered in its second weekend, falling 57.8 percent from its previous week’s debut to a $9.64 million take. While its opening weekend was actually higher than the 2012’s original $15 million take, the sequel’s second weekend is sharply behind the original’s $13.6 million second weekend. Jack Reacher grossed a total of $80 million domestically following its December 2012 release; Jack Reacher: Never Go Back will have a challenge on its hands to try to meet that number with several high-profile films coming up. The film has grossed a total of $39.77 million domestically so far.

Ouija: Origin of Evil grossed $7.11 million from 3,168 locations in its second weekend. The horror flick is trailing its previous entry, 2014’s Ouija, by $10 million over the same period. It expanded to 20 territories last weekend, adding $8.3 million to its overseas bounty. Spain was the weekend’s top new territory with a $982,000 fourth place finish. The Ouija sequel has now grossed a total of $24.68 million domestically and $43.7 million worldwide.