The Accountant Adds Up in Theaters

Warner Bros. Pictures’ thriller The Accountant topped the box office last weekend (Oct. 14-15) with $24.71 million. The crime thriller starring Ben Affleck as the title character alongside Anna Kendrick and J.K. Simmons was able to take first place with the lack of serious competition, despite mixed reviews for the film. 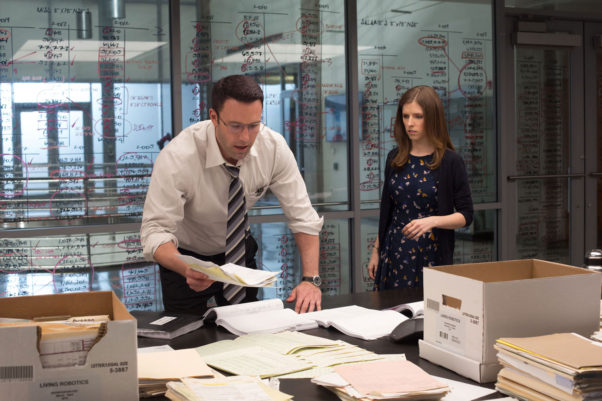 The Accountant, starring Ben Affleck and Anna Kendrick, opened at the top of the box office over the weekend with $24.71 million. (Photo: Chuck Zlotnick/Warner Bros. Entertainment)

The film debuted 27.0 percent above the $19.45 million opening of Affleck’s autumn-released thriller Argo in 2012, and 7.4 percent below the $26.7 million inflation-adjusted opening for his autumn-released thriller The Town in 2010. The Accountant also opened with more than triple the $7.70 million opening of Affleck’s most recent crime thriller and box office bomb Runner Runner.

Universal Pictures’ holdover — and last week’s top film — The Girl on the Train earned second place with $12.24 million, slightly beating out Universal’s new comedy debut Kevin Hart: What Now?, which took in $11.76 million. The Girl on the Train fell 50 percent from its opening weekend. Compare that to the much milder 26.9 percent second-weekend decline from the stylistically-similar Gone Girl.

Kevin Hart: What Now? debuted 7 percent higher than the $11.0 million inflation-adjusted opening of Hart’s previous stand-up film, 2013’s Let Me Explain, although it debuted on a Wednesday instead of a Friday, resulting in a deflated opening weekend. Kevin Hart: What Now? opened 2.3 percent behind Let Me Explain‘s inflation-adjusted total after its first three days of release — Wednesday, Thursday, and Friday.

Open Road Films’ new teenage superhero film Max Steel had one of the worst opening weekends of all time for a wide release, with only $2.18 million, not even enough to rank in the top 10. That ranks it as the eighth-worst inflation-adjusted opening weekend of all time for a film playing in at least 2,000 theaters nationwide. Interestingly, four of the seven films below Max Steel on the all time list were released in the past year and a half alone: last month’s Morgan and last year’s We Are Your Friends, Rock the Kasbah and Jem and the Holograms. With an 11th-place debut outside of the top 10 — a very rare occurrence for a national wide release film — expect this movie to fall fast and be out of theaters entirely within a few weeks.