Ambar, which already has a restaurant on Barracks Row in D.C., opened another area location at 2901 Wilson Blvd., Clarendon, in the former Boulevard Woodgrill last week. The restaurant also has a location in Belgrade, Serbia. 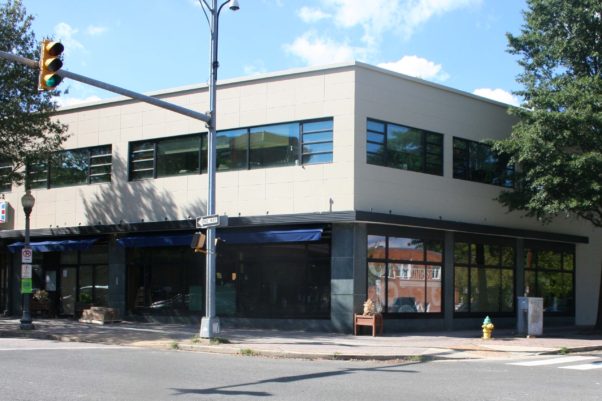 Owner Ivan Iricanin partnered with his wife Nya Gill, a recent graduate of the Interior Architecture & Design MFA program at George Washington University, to design the 3,600-square foot Clarendon restaurant. Her design takes advantage of the corner location with floor-to-ceiling windows that floods the dining room and bar with light.

“The first location on Capitol Hill is cozy and warm. It was designed to interpret of the literal meaning of the word ‘Ambar’ in Serbian, which is a barn to store dried foods in,” Gill told DC on Heels. “The space evokes the Balkan countryside making ample use of reclaimed wood and warm lighting, with a few modern touches. The Belgrade location is more cosmopolitan, reflecting what the city has become. At the third location, I tied to marry the two with a warm, comfortable design reminiscent of the Balkan region.”

The 130-seat dining room includes distressed white chairs and turquoise banquettes, a high tin ceiling, dark wood floors, white subway tiles on the walls and plenty of plants hanging from the ceiling. Black-and-white photos and postcards from Serbia line the backs of the banquettes. The focal point of the 16-seat Carrera marble-top bar, with custom brass and glass shelving and antiqued mirrors, is a black-and-white photograph of Old Belgrade on the ceiling. A seating area across from the bar features a bar height banquette upholstered in antiqued leather and marble bar tables. A 50-seat heated and covered sidewalk patio will be available during the spring and summer. 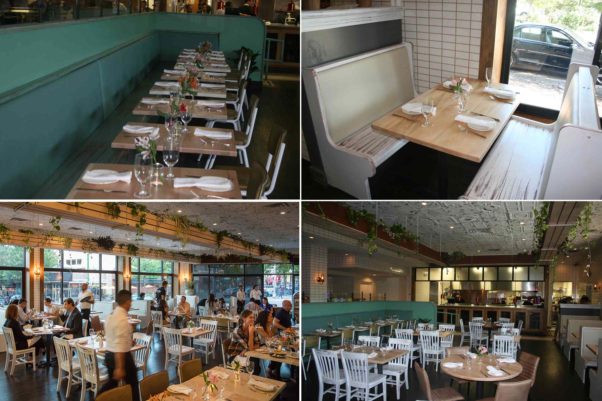 The Clarendon outpost has a rotisserie, which will be used to cook pork, chicken and lamb daily, and charcoal grill that will be used to cook other meats, which will come from Amish farms in Pennsylvania, including kebabs, burgers and seafood. It also offers mezze, but made with different meats than on Barracks Row. There are three new spreads – roasted eggplant spread, tzatziki with roasted beets and lamb pate – along with new sudzuk sausage (sort of a Balkan pepperoni) and grilled veggie flatbreads. 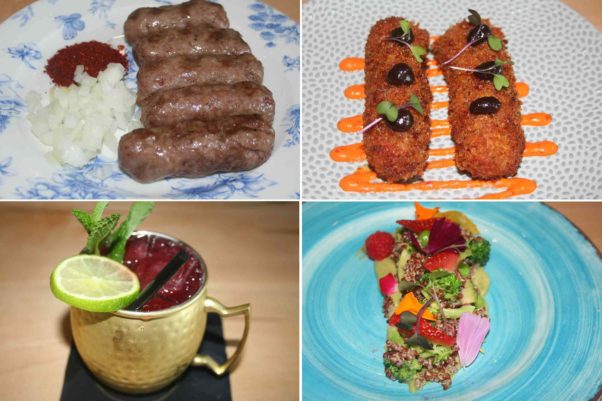 Dishes in Clarendon include cevapi, a Balkan kebab made from veal and pork and served with onions (clockwise from top left); paprika silja, breaded peppers stuffed with kajmak cheese and topped with Kalamata olive jam; quinoa salad with green pea puree, broccoli, squash, asparagus and berries in a light honey lemon dressing; and a Belgrade Mule with plum rakia.(Photos: Mark Heckathorn/DC on Heels)

Clarendon will also offer the restaurant’s Balkan Experience, unlimited small plates for $35 or add a large plate for $10 more.

The bar program features more than 45 Balkan wines from Serbia, Macedonia, Slovenia, Montenegro, Bosnia, Herzegovina and Croatia priced from $26-$90 by the bottle. Sixteen will also be available by the glass with prices ranging from $6-$13. There are 10 beers on tap. The restaurant is also home to Virginia’s first Rakia bar, which will serve several varieties of rakia, an alcoholic beverage produced by the distillation of fermented fruit and brandy, as well as cocktails made with rakia, such as the Belgrade Mule made with plum rakia, berry-ginger puree, fresh lime and ginger beer; and the Old Fashioned, made with bourbon and rakia, cane syrup infused with dried plums, bitters and orange peel.