Monday is Columbus Day, so some people may have a three-day weekend. If you aren’g going to Nationals Park to cheer on the Nationals as they take on the Los Angeles Dodgers in first two games of the National League Division Series, there are a few other events to fill your weekend in the DMV.

The Woodley Park station on the Red Line will be closed this weekend for escalator work with free shuttle buses running between Woodley Park and Dupont Circle. Red Line trains will also single track between Silver Spring and Glenmont with trains running every 12-15 minutes between Shady Grove and Silver Spring and every 20 minutes between Silver Spring and Glenmont. On the Orange Line, the Dunn Loring and Vienna stations will be closed with buses replacing trains between West Falls Church and Vienna. Trains will operate on a regular weekend schedule between New Carrollton and West Falls Church. The Blue, Silver, Yellow and Green Lines will run on regular schedules.

Taste of D.C. fills four blocks of Pennsylvania Avenue with restaurant booths, a beer garden and a wine walk and two music stages with new bands playing every hour. The Ben’s Chili Bowl’s World Chili Eating Championship featuring defending champion Joey Chestnut will be on the main stage at 3 p.m. Saturday while the Military Chili Eating Championship starts at 2:30 p.m. As for what you can eat, 63 D.C. restaurants and food trucks will fill restaurant row, including 14K, Asia Nine, Capitol Hill Crab Cakes, Georgia Brown’s, Mastro’s Steakhouse, Occidental Grill, Pizzeria Vetri, SKWR, Tadich Grill, Texas de Brazil, Texas Jacks and Barbecue and The Capital Grille, just to name a few, with at least one item priced between $1-$3 and other no more than $8.

Oct. 8 from 1-8 p.m. and Oct. 9 from 11 a.m.-5 p.m. along Pennsylvania Avenue between Third and Seventh streets NW. Admission is $10 for children, $20 for general admission with one drink, $40 for Drink Lovers with a cup and $25 in beverage tickets, $60 for a Tastemaker ticket with private entrance, lounge, seating and cocktails or $80 for Tastemaker Plus with a seminar. 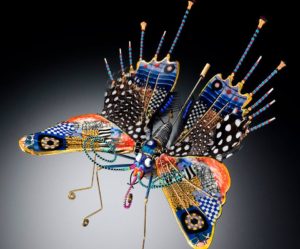 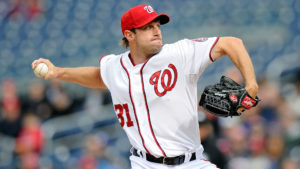 Max Scherzer is the starting pitcher for the Nats in the National League Division Series against the Los Angeles Dodgers Friday night. (Photo: Getty Images)

The Washington Nationals (95-67) take on the Los Angeles Dodgers (91-71) in postseason baseball playoffs this weekend in D.C. in the first two games of the National League Division Series. Game 1, features pitchers Max Scherzer for the Nationals and Clayton Kershaw for the Dodgers at 5:30 p.m. Friday, while Game 2 starts at 4 p.m. on Saturday. 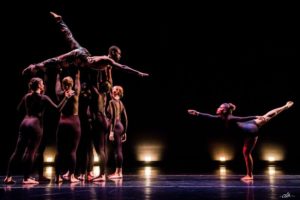 The VelocityDC, now in its eighth year, is expanding to two days. It offers dance performances from tap to flamenco with performances by Capitol Movement, Jane Franklin Dance, the Washington Ballet and more that can suit just about everyone’s taste.

Union Market will show Ghostbusters on the side of its building on Friday to wrap up this year’s Drive-In series. (Photo: Union Market)

This year’s outdoor movie season wraps up with the original 1984 Ghostbusters getting screened on the big white wall outside the market at the last Union Market Drive-In. This is the last drive-in of the season. Take some lawn chairs and a picnic, or grab some dinner from the stands inside the market and enjoy the show.

The latest Heritage Family Day at the Smithsonian’s National Air and Space Museum downtown is Hispanic Heritage Month: Innovators in Air and Space, which celebrates the contributions of Latinos to aviation and space exploration. There will be docent tours in Spanish at 11 a.m. and 2 p.m., as well as an opportunity to learn about the Arecibo Observatory in Puerto Rico. There also will be hands-on activities and story times throughout the day and a chance to meet experts Pablo de Leon, who is working on a space suit for use on Mars, and Harvard’s Erika Wright.

Empire of the Sun headlines this year’s All Things Go Fall Classic at Yards Park on Saturday. (Photo: Getty Images)

D.C.’s homegrown electronic fall music festival, All Things Go Fall Classic, now in its third year, moves from Union Market to Yards Park. on the Capitol Riverfront. The headliners are Australian duo Empire of the Sun, whose third album, Two Vines, comes out this month; Passion Pit, an indie-pop group out of Cambridge, Mass.; and Sylvan Esso, an electro-folk duo out of Durham, N.C., that just released the single Radio. A local name to watch: Ace Cosgrove, a Maryland rapper who had a breakout performance at last year’s Landmark Music Festival. Food will be available from Takorean, Beefsteak, Compass Coffee, Milk Cult, Shake Shack, Timber Pizza, Buredo, DGS Delicatessen and others. 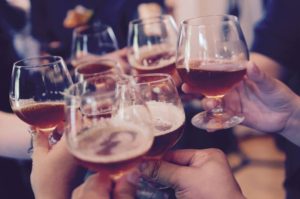 Twenty-five Maryland breweries and cideries pour their products at the new Hops and Harvest Festival. There’s a good mix of new breweries like Mad Science and Black Flag, and old favorites like Heavy Seas and Brewers Art, plus several farm breweries including Manor Hill and Brookville Beer Farm. Choose one of two sessions: Both offer live music from For the Win, games and food trucks. Picnics, blankets and chairs are welcome. 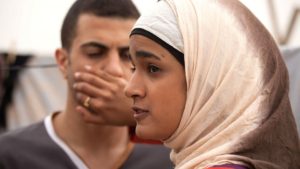 Seret D.C. is the Washington Jewish Film Festival’s contemporary Israeli film series featuring eight films and 12 screenings showcasing top Israeli cinema from the past year. The closing film at 6:30 p.m. Sunday is Sand Storm, which won the Grand Jury Prize in the World Cinema Dramatic competition at the Sundance Film Festival, about a Bedouin mother and her teenager who defy polygamist marital traditions in southern Israel (in Arabic with English subtitles). Other films include em>Abulele, Fauda, Princess, AKA Nadia, Atomic Falafel and Mr. Gaga.