Warner Bros. Pictures’ biopic Sully may never become an in-flight movie, but it still topped the box office last weekend (Sept. 9-11) with $35.03 million. The drams stars Tom Hanks as Chesley “Sully” Sullenberger, the real-life captain who saved more than 150 lives with his controlled crash land in New York City’s Hudson River in 2009, and was directed by Clint Eastwood. The film was helped by strong reviews and its estimated $4.0 million from IMAX theaters, an unusually high figure for a drama instead of the special effects-laden films that usually perform better in IMAX. It was also the first film ever to be shot entirely with IMAX cameras. 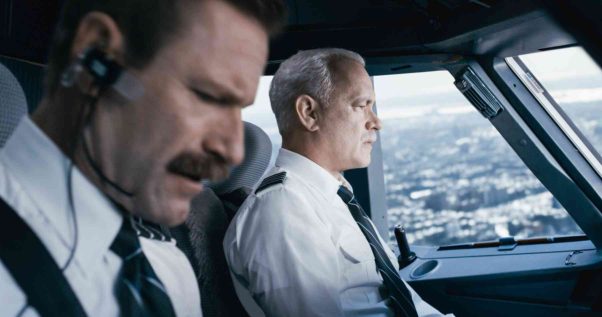 Compared to Hanks’ other recent films, Sully starts with more than double the $15.37 million opening of last year’s Bridge of Spies and 36.3 percent higher than the $25.71 million start of 2013’s Captain Phillips. Compared to other recent movies about a plane flight gone wrong, Sully starts 21.3 percent ahead of the $28.87 million opening of 2014’s Non-Stop and 40.7 percent ahead of the $24.90 million start of 2012’s Flight.

Sony Pictures’ When the Bough Breaks took second place with a $14.20 million debut. The psychological thriller stars Morris Chestnut and Regina Hall as a married couple who find themselves in danger from the surrogate mother of their baby. The film opened 45.1 percent below the $25.88 million opening for last year’s The Perfect Guy, another September drama/thriller starring Chestnut. But with When the Bough Breaks’ low $10 million budget, it should still be considered a success.

Sony also took third place with their horror film Don’t Breathe, which fell after two weekends on top. The movie dropped 45.1 percent to gross $8.25 million, for a total of $66.87 million through three weekends. That is 22.2 percent ahead of this summer’s breakout horror Lights Out, which had earned $54.71 million through the same period.

Last weekend’s other new release, Lionsgate’s animated The Wild Life opened with a disappointing $3.34 million. The film, which tells the story of castaway Robinson Crusoe from the perspective of the animals on the island, debuted in fifth place. That is the fourth worst opening of all time for films playing in about 2,500 theaters. It started 31.3 percent behind the $4.86 million opening of April’s Ratchet & Clank and 51.2 percent behind the $6.84 million opening of January’s Norm of the North.